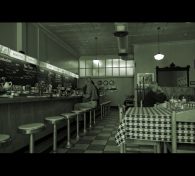 The young girl’s sandals slap the buckled sidewalks of Wesley Street. She feels silly and conspicuous in her grandmother’s sun hat, the sweatband stained blue-black by hair dye and perspiration. Stiff from decades of blackland prairie summers, the straw crown swallows her head like an overturned bowl, hot and heavy on her scalp. She thinks about taking it off, but wearing it was a condition of the old woman’s consent for this little outing, and spying eyes lurk behind curtains along the way. In this town, everybody knows everybody’s business.

“If I send you home looking like a Negro, your parents won’t let you come anymore,” her grandmother had said, rough hands tying the cord tightly under her chin.

That wouldn’t be so bad. This is the most boring place on earth, the girl had snapped in her imagination—and immediately felt guilty.

But now she is on her own, free and flush with cash, three dollars and sixty-seven cents—not counting the newly minted silver dollar her grandfather slipped her that morning—in the patent-leather handbag swinging from her shoulder. She is walking the twenty-odd blocks to “downtown,” past the Piggly-Wiggly’s faint aroma of Pine-Sol and rotting produce; past CeeBee’s burgers, five for a dollar; past the Tucker Candy Company with its air-puffed peppermints and the Sinclair filling station with the plastic dinosaur in the window; past the print shop and tiny storefronts selling insurance and legal services. She walks as fast as her thin legs will carry her, past Marshall and Morse, Spencer and Crockett Streets; left on Lee Street, where yesterday she was dragged to Sunday School to sit stiffly in a small chair amid small strangers singing “Brighten the Corner Where You Are”; past the bus depot; past the sign that has hung over the town’s main street for almost half a century: 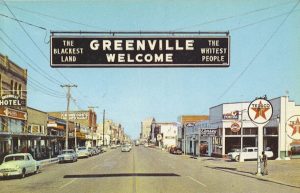 Sweat mingles with street grit between her toes, and a trickle of moisture tickles the skin along her spine. In the stifling humidity, the hat gives off the faint odor of mothballs and unwashed hair, making her feel queasy and unsettled.

One more block, and there it is on the right: Kress, with its gold letters and terra cotta curlicues outside and its riches of melamine and china, dish towels and toys, makeup and hair tonic inside. She uses both hands and her full weight of sixty-plus pounds to open the heavy glass door, which gives way with the jingle of a bell and a gust of electrically cooled air.

The saleswoman at the cash register looks up briefly, then returns to her magazine.

The girl’s sandals make soft noises on the hardwood floor as she heads to the makeup counter, where cardboard women smile seductively with lips the latest shades of red. She takes off the hat and sets it on the counter, wiping the sweat from her hairline with the back of her hand. Perched on the glass, in all its cobalt crystal glory, is a bottle of Evening in Paris marked “tester.” With a quick look at the oblivious saleswoman, she sprays it on her neck. From an adjoining display, she picks up a bottle of Sue Pree nail polish, Shocking Pink, a color she has never seen in nature. Glancing at the saleswoman once again, she unscrews and gently lifts the lid. Acetate and formaldehyde sting her nose as the liquid drips down the brush back into the bottle. She imagines it on her fingernails, transforming the chewed and ragged ends into something beautiful, mysterious, and adult.

The entry bell jingles and she jumps, hastily screwing the cap back on. Struggling with the door is a boy even younger and smaller than she, his skin the color of the mahogany coffee table in her grandmother’s living room. The saleswoman looks up, frowns, and returns to her reading as he passes close by the girl and heads straight to the toys, one aisle over.

Still holding the nail polish, she watches the boy inspect a bin of brightly colored metal trucks. His cotton shirt is clean and pressed, he smells of soap, and his hair looks like the steel wool her grandmother uses to scrub the char from her frying pan. She wonders what it feels like, whether it is stiff and scratchy or soft like lamb’s wool. Feeling her eyes on him, the boy looks at her and grins. She looks away, pretending to examine the label on the back of the bottle.

The boy picks up a tanker truck and examines it carefully, spinning the wheels with his finger. Smiling, he waves it in figure eights through the air. “Vrooom,” he says softly. “Vro-o-o-o-m-m-m-m!”

She reads the label on the back of the nail polish: Caution. Flammable. Do not use near fire or flame. Keep out of the reach of children.

She jumps at the voice of the saleswoman barreling toward them. Hiding the nail polish behind her, she backs up against the counter.

The boy’s smile quickly fades, and he drops the truck back into the bin.

His small face crumples into tears. The front door jingles, and in walks a young woman who looks as if she is searching for something. She is wearing a hat and white gloves, and her skin is the same shade as the little boy’s. She sees him and rushes over.

“Myron, what are you doing?” She grabs him roughly by the arm and steers him toward the door. She looks at the saleswoman, apologetic. “I’m sorry, ma’am.”

“What are you doing, letting a youngster run wild like that? He has no business here.”

“Yes, ma’am, right away.” She propels the crying boy out the door, shaking him by the shoulder. “What were you doing? You know you shouldn’t be in there.”

The bell jingles on their way out, and the saleswoman shakes her head at the young girl.

“Them people, you gotta watch ’em ever minute, or they’ll steal ya blind.” She walks to the cash register and returns to her magazine, her face pinched with annoyance.

The girl stands motionless. Clammy air chills the sweat running down her back, and her feet feel strangely remote and cold. She opens her purse. With the hand holding the nail polish, she pulls out her grandmother’s damp, floral-scented hankie and dabs her face. The handkerchief is now wrapped around the bottle, and she slips them into her handbag, underneath her coin purse.

The saleswoman doesn’t look up.

The girl feels elated but eerily calm, as if she has crossed over to a place from which there is no turning back. She picks up another bottle of nail polish, this one a frosty off-white, and reads the label: Caution. Flammable. Do not use near fire or flame. Keep out of the reach of children.

She takes it to the cash register. The saleswoman puts down her magazine, smiles, and rings her up. “How old are you?”

The saleswoman laughs. “Right. Does your mama know you’re buying this?”

“Well, all right,” says the saleswoman, slipping the receipt and the polish into a small brown paper bag. “Ain’t no law against it, but don’t you be makin’ a mess, now, or your mama and daddy will be over here gettin’ me into trouble.”

“You left something over there.”

She walks quickly back to the counter and retrieves the sun hat, slipping it on her head and tying it tightly under her chin. “Thank you, ma’am,” she says.

The doorbell jingles as she walks out, her sandals smacking the concrete in the still and sultry air.

“Chilling” is one word we’d use to describe author Bett Butler’s piece. With her tactile descriptions of setting and character she puts us squarely into the time and creates a tension that we feel down all the way to our bones. It’s masterfully done writing.