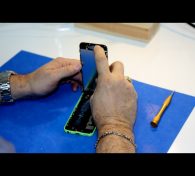 A man needs a hobby. Some fish, some work on their cars, while others tend to their gardens. My hobby’s different, I play God. Now, before you start in, I’m not making any claim about being a deity, even a minor one. And I’m not one of those people trying to do God’s work on Earth. He made this mess, let him clean it up. Playing God is something I do to pass time when it’s slow at the shop. I figured it was a harmless hobby, at least until the devil came through my front door last Wednesday.

My shop is in a small storefront in the strip mall on the corner of Wilshire and Division. My dad opened it back in fifty-nine. He saw all the gadgets people were buying and figured eventually they’d break. So, he took this correspondence course. You know the kind of course they used to advertise in Popular Mechanics where you’d clip the coupon on the dotted line to enroll. He worked hard to build the business, and when he passed away, I inherited the shop. For a time, business was good, but it trailed off when people started buying all that throwaway stuff.

Fortunately, I was smart enough to see the Jell-O sliding down the wall. I watched people at the mall, the grocery store, restaurants, anywhere I could. They were all walking around with their phones. Then that Jobs guy decided to stuff a computer into one, and everybody went nuts. People were spending a month’s wage to buy one of those gadgets every couple of years. I figured sooner or later they’d get tired of throwing all that money away. Now, I’ve got a good little business replacing batteries and fixing cracked screens.

But all that’s on the side. I suppose you want to know about my troubles. But hang on, the bell just rang.

“You came to the right place mam. Tell you what. Why don’t you go over to the coffee shop next door and get yourself one of their lattes. I hear they’re special. And before you slurp the last of that chocolate off the bottom of the cup, I’ll have a new battery in your phone.”

Pretty one she is… Anyway, I got a deal with the coffee shop. I tell my customers to go there, and the manager of the coffee shop tells his customers that I’m the one they need to see to get their phone fixed.

Whenever I get a new customer, I add a small app to their phone. It lets me hear all their conversations and see all their texts. Right now, I’m listening to a little over five hundred people. Not quite as good as God, but I’m getting there. I’m not worried about being found out because the next stop for those phones will be the recycle bin. My biggest problem is keeping the numbers up. I lose a few every day. Just like God I suppose.

Hang on, she’s coming back.

“Latte good? I knew you’d like it. Here’s your phone, new battery and all. Have a good day.”

There goes another convert.

Mostly, I hear people talking about where they’ve been or where they’re going, mindless gossip. But once in a while I hear something valuable. A few months ago, I heard our mayor telling a developer that the zoning variance for the land he wanted to build on would be approved at the council meeting next month. Well, I went right to my lawyer and told him to buy a nice chunk of that land for me and ended up selling it for a tidy profit.

Now, if you’re going to be a God, you’ve got to have rules. No rules, no deity, I say. But instead of ten, I’ve only got three. Rule one: God hears everything. That’s easy since people are always on their phones. Rule two: no one knows when God is listening. Even God has only two ears. And rule three: God doesn’t interfere in the affairs of others. Obeying the last rule is essential. You see, if God starts interfering with people’s lives, he might as well string them up like puppets. And what’s the point in that?

Unfortunately, deism is what led to my problem with Satan. It was a quiet afternoon, and I went to the backroom to check on my kingdom.

Just as I was about to lock the front door, a set of bony fingers wrapped around the handle and pulled the door open. I looked up and saw him, the devil himself. He was tall, rail thin with long greasy hair, and eyes that burned like fire.

His eyes rolled up to me and he said, “Need a battery, fast.”

When he handed me his phone, I could feel the heat radiate from his fingertips. I took the phone and retreated to my workshop. Fifteen minutes later I came out and saw him pacing back and forth like a caged animal.

Satan looked at me and said, “How much?”

He pulled a hundred out of his pocket and said, “All I got.”

I went to the back room, got his change, and he left without saying a word. Strange. I just made a deal with the devil and all he wanted was change for a Franklin. Maybe I really was God.

After a few minutes I got my feet back under me and I settled into my old swivel chair in the back room to check on my domain.

“Did you see how she treated him at—”

“Yesterday. I went to the—”

When you’re God you can tell right away if the conversation is worth listening to. I did this for probably twenty or so more.

“The old guy changed my hundred ”

I slammed on the brakes and went back for more.

“I bet he’s got a load in a safe in the backroom.”

I jumped up and snuck to the front of the store. Hiding behind the counter, I could see Satan standing in the parking lot with the phone to his ear, looking right at my shop. He put his phone away and just stood there staring. A few minutes later, a black wagon that looked like a hearse pulled up and took him away.

The next morning I got to the shop early. I abandoned my usual skimming and went right to Satan’s phone.

“I checked. On Saturday the coffee shop doesn’t open until nine. That’ll be the best time. The fewer witnesses the better.”

“What about the old guy in the shop?” another voice said.

I ripped my headphones off, flopped over the sign in the front door, and sped home.

It was Wednesday. Three days before the devil came for me. My first thought was to close up and take a vacation, but that would only postpone the inevitable. I could call the police, but then I’d have to explain the whole God thing and probably spend a good chunk of the time I have left behind bars. That night in bed, I tossed and turned until I was tangled in the sheets like a moth trapped in a cocoon. Tired from worry, I finally drifted off to sleep feeling like a condemned man.

It was Saturday, and I was resigned to my fate. I went to the shop a half hour before opening so I could listen to my people one last time. Then I turned to the front window and saw Satan approach, phone in hand. Clever. Come just before opening with some pretense. His tattooed knuckles rapped on the glass and I opened the door to my fate.

“Something’s wrong with my phone and I need to get to work.”

I pursed my lips to say something, but what could I say? Satan handed me his phone, and I looked down at the screen. When he pulled the gun out of his jacket, I shut my eyes and waited. A sharp crack echoed off the walls and the smell of sulfur filled the air. Then nothing. Slowly, I opened my eyes and through the slits I could see the creature lying on the floor. For a moment I stared, expecting him to dissolve into nothingness.

Then I heard, “Good thing we got a tip that he was going to be here this morning. This guy is wanted for a string of armed robberies,” the cop said, holstering his weapon. “Still can’t figure out how I picked up his conversation.”

The cop gave me a quizzical look and called for the ambulance. I smiled as the paramedics wheeled the devil out. You see, even God gets his wires crossed once in a while.

H.E. Vogl is a retired professor who has turned to writing fiction. His work has been published in Fiction on the Web, Bewildering Stories, Every Day Fiction, and Fabula Argentea. He and his wife Rita live in Ormond Beach, Florida.

WHY WE CHOSE TO PUBLISH “A Man Needs a Hobby”:

Start with an unassuming yet somewhat cryptic title, intrigue and grab the reader with the opening paragraph, then wrap it up in an unexpected way—all in under 1500 words—and you have the recipe for a good story.

Author H. E. Vogl doesn’t attempt to craft a piece with a message or hidden meaning. He simply delivers a well-wrought, entertaining piece with a strong, interesting character. And that makes for a successful story for us.