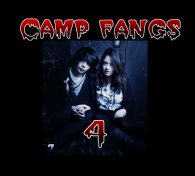 All four walls are completely covered in movie posters. Rows of Cyborg Babysitter, Study Hall at the Center of the Earth, and Undercover Undergrad. From her first film, My Prom Date is a Werewolf, to Frankenstein’s Cheerleader, her most recent.

As of her twenty-first birthday, Nigella Van Trapp has appeared in more than a hundred made-for-television movies produced by the Just Us Kidz network.

Van Trapp reclines on her pale, lavender leather sofa. She eyes some posters carefully, nodding with a smile at others. Afternoon sun from the windows overhead sends light across each wall.

“Of course Camp Fangs’ was my favorite,” she announces suddenly. Van Trapp swings off the sofa, smooths the knees of her jeans and walks up to a poster from the first Camp Fangs movie, mounted just above her head. She points to herself coyly bearing a pair of sharp teeth inside a wide smile.

“I’m right there, near the center. Assistant Junior Counselor Kelly.”

A series of summer camp horror-comedies, Camp Fangs was Just Us Kidz’s most successful franchise, with even reruns breaking viewer records.

“It was quick work,” Van Trapp explains. “We wrapped on most of them in just weeks.”

She flattens a wrinkled corner of the poster. Van Trapp appeared in all four Camp Fangs movies, one of only two actors to do so. “I didn’t set out to be this big, respectable star,” she calls over her shoulder. “I’m not ashamed to admit I do movies that are fun, or silly.”

The poster continues to curl at the edge, despite Van Trapp’s efforts. She shrugs, gives a short laugh reminiscent of the one Assistant Junior Counselor Kelly was famous for and rolls back onto the sofa. “They originally weren’t going to release the fourth movie,” Van Trapp admits. “We begged the producers to put it out, but if the series hadn’t been so popular, they never would have.”

Camp Fangs 4: Rise of the Vampire Queen earned the highest ratings in the network’s history. “By that point, everybody wanted in. Big stars were begging for cameo spots.” Van Trapp leans back and folds her arms behind her head. “I never spoke to any of them, they were just slumming it in a made-for-TV movie to show how down-to-earth they were.”

Van Trapp pauses and looks at a lone poster of Camp Fangs 4 on the far wall. Though carefully pasted back together, the rip through the poster is visible even from this distance. “Stace and I died laughing during those casting calls. Watching so-called superstars try and bring gravitas to a food fight scene, of all things. Stace used to pantomime their auditions.” Van Trapp’s voice drops to a whisper. “A better actor at ten years old than any of them.”

The mention of Van Trapp’s costar, the only other actor to appear in all four Camp Fangs movies, fills the room. It draws light from the colorful posters, almost dimming their brilliance.

“Anastasia Bledsoe wasn’t just better. She was the best.” Van Trapp shifts to her side and faces the back of the couch. A soft sound, possibly a sob, ripples and Van Trapp’s whole body shudders. “You couldn’t dream up an award big enough to match Stace’s talent.” Van Trapp spins back around and stands.

“Some huge prestige picture was being produced exclusively for Stace. She obviously wasn’t doing Camp Fangs after that, so there was this big surprise at the end of the fourth movie.” Van Trapp walks up to the torn poster and scrutinizes it. “Something crazy and shocking.

“The big reveal was that Stace’s character, Megan, was the legendary vampire queen. It was supposed to be a joke. This little girl is secretly an ageless monster, everybody finds out right before she falls into the lake behind an old, wooden chapel and evaporates.” Van Trapp squints up at the sun. “It made no sense, and it wasn’t meant to. Nobody is going to hyperanalyze a Camp Fangs movie. Just a wacky twist.”

“Except Stace wouldn’t do it. She refused.”

Nigella Van Trapp drags her finger down, all the way through the already torn poster.

“I confronted her as soon as I found out. Demanded to know why she wouldn’t film the ending.” Van Trapp snatches the shredded remains off her wall and crumples them into as small a ball as she possibly can.

“Stace expected me to believe she actually was queen of the vampires. In real life. I almost did. It sounds so stupid when I say it, but Stace, she came this close to convincing me. Gave me all these details about how she had ‘roamed the world since the time before Christ.’ Swore she couldn’t do the scene because the lake was too close to that chapel. Said someone, somewhere. may have blessed the lake into holy water. She didn’t want to risk it, couldn’t risk it.”

Van Trapp turns on her heels, the crumpled poster locked between clenched fingers. The sun returns and illuminates every knuckle. “But it was simply too ridiculous. I called her a liar. She was still just a kid, and kids lie all the time.

“I told her to do the damn scene and go off and be famous and let me spend the rest of my life getting cheap laughs.” Van Trapp’s voice chokes off. What remains of the poster hangs in her hand as she trudges back to the sofa and comes down heavily. “Told her we were co-workers, not friends, and not everyone makes it big like her. Said some of us, all we have is the dumb stuff on TV after school.”

Slowly, carefully, Van Trapp unwads the Camp Fangs poster. She flattens out the halves on her lap as best she can.

“Finally…” Van Trapp continues after clearing her throat, “Stace said she would do the scene. For me, she would. So she does. Her character reveals she’s the queen vampire, falls in the lake, puffs into smoke. Everybody on-set is applauding, talking all at once about how much success she’s going to have after Camp Fangs.

“Then we realized Stace never came up. She was still down there in the lake.”

Van Trapp begins tearing the poster halves into strips, letting them fall at her feet.

“I think I was the first to dive in and look for her, but a bunch of others did too. Someone called the police; suddenly there were reporters everywhere. It was a nightmare for the network.”

When the poster is completely shredded, when Van Trapp’s hands are empty, she looks up. A tear she has held back fights loose and runs down the side of her nose. It skirts the edge of her lips and hangs on her chin for a bare second before landing on the carpet of poster pieces below.

“The search for Anastasia Bledsoe lasted less than a week,” Van Trapp snarls. “Six damn days. They couldn’t find her body; the lake was too murky to dredge. Prevailing consensus was that an alligator got her, though there was talk of the investigation being rushed. Even evidence disappearing from the scene.

Van Trapp stands. She digs into the pocket of her jeans and holds something out that glitters in what remains of the day’s light.

“I found these when I jumped in the lake after Stace. Never turned them over to the police or showed anybody from the network. I mean, why bother? They don’t prove anything.”

In her hand is a pair of polished white fangs.

“They look exactly like the ones everybody wore in the Camp Fangs movies. But occasionally I feel like getting them tested somehow, see if they’re just shiny plastic or actual, real teeth.”

Van Trapp slides the fangs back into her pocket.

“I never have, though. I won’t. Because she’s not coming back. Whether Anastasia was queen of the vampires or just a talented girl who drowned, she’s gone. We remember what was, remember it until it hurts, then we move on.”

Van Trapp steps over the shredded poster, walks past walls full of Phantom of the Debate Club and Slumber Party on Planet Z. She pauses by an end table near the door. It is piled with fan mail, packages, and an abundance of junk. She opens a package tube on top bearing the logo of the Just Us Kidz network above the return address.

Out of the tube slides a poster. Van Trapp rummages through the contents of the table and comes up with a roll of tape. She strides over to the one blank space on her wall and sticks the poster there. Camp Fangs 5: Revenge of the Vampire Queen’s Big Sister. When she is done, she doesn’t even look at it. Nigella Van Trapp leaves the room without a single glance back.

The last of the sun dips past the obliterated Camp Fangs 4 poster on the floor, and leaves it in darkness.

Samuel Barnhart’s short stories have appeared in Page and Spine, Theme of Absence and Youth Imagination. He writes and bakes from South Florida, and can be found online at sambarnhart.tumblr.com.

WHY WE CHOSE TO PUBLISH “A Vampiress, And Brave”

After waiting for five years to receive just one good vampire story to publish, for this issue, we found two excellent ones for this issue, this being the second to grab our attention. We love the movie-based premise—and the unexpected ending.

One comment on “A VAMPIRESS, AND BRAVE by Samuel Barnhart”