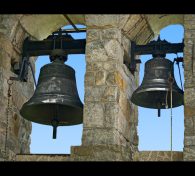 The bright winter sunshine pierced his eyelids. He elbowed himself upright in bed. His head was pounding. Why were the blinds open? When had the iron bars been slid away? Memories, fragments of a dream toyed with the far reaches of his mind as he got out of bed and shuffled to the window.

London was aglow with people walking and talking. The tall towers sparkled, and distant tabernacle bells created their own lively conversation. He shook his head at the light and the noise, instinctively looking down on the world. Below him a beggar girl stood on the cobblestones picking her nose.

The beggar girl wiped her nostrils thoroughly with the hem of her tattered skirt. “It’s New Year’s Day, sir, it surely is.”

He stumbled away from the window. The dream, every bit of it came back to him and fear gripped his soul. Surely it must have been a dream. But if it wasn’t? A chill beyond what the season could threaten ran through his whole body as he tore down the stairs from his bedroom to his office. He dove to his desk, to the ledgers sitting open on his most recent entries. He read them, over and over. He would’ve dropped dead right there if the terror he’d felt had not submitted to a new feeling, a powerful, bottomless rage spiraling inside of him.

It was no dream there in his own ink, written by his own hand. Debts he was owed, dozens of them forgiven with a single penstroke. Scads of money frittered away to charity. A Christmas goose, the makings of a feast wasted on a crippled child’s family. And a raise, of all things, a raise in pay given to his worthless, though admittedly loyal employee.

What madness had claimed his mind last week? What hellish forces compelled him to hurl money at these undeserving insects? It mattered not; he would set things right. He stomped back to his bedroom and dressed decisively. At the front door he paused to place his hat firmly on his head—a head no longer clotted with dreams—and roared through the portal.

His first act was to grip the beggar girl he’d spoken to from his window roughly about the shoulders. “Know you the butcher?”

“Go to him and demand my money back for a goose purchased last week.” He shoved the girl forward. “If he resists, tell him I shall foreclose on his premises and those of everybody he has ever known or cared about!”

She dashed down the street. He started off himself much more deliberately, tripping those he passed with his cane, pausing only to kick a juicy bone away from the adorable puppy who chewed upon it. “Fleabag,” he hissed at the sad puppy as its treat disappeared.

A pair of charity sisters stood at the crossing, wishing blessings of the new year to all who dropped a crown in their box. He recognized them immediately as those to whom he himself had senselessly donated and confronted them with a snarl.

“Good day to you, sir, and may we say—” The sister had no chance to finish. He drew a pistol from the pocket of his coat and fired it above the sisters. The discharge sent them and everybody else on the streets fleeing. He merely allowed himself the slightest of grim smiles and continued on.

Yet a strange sense of dread lurked in him as he walked. Fog swirled slowly at his feet, then faster and higher until he was forced to stop completely. The sky clouded over; unseasonal thunder crashed. Finally, the fog separated before him into four distinct human shapes. There floated his former business partner, burdened with ghostly shackles and chains, and a trio of phantoms offering glimpses into mankind’s past, present and future.

His beshackled former partner sighed mournfully. “Did we not warn you? On that cold Christmas Eve did we not come tell you the wages your greed would earn?” The fellow spirits made thoughtful noises of agreement. “Why now, at the dawn of this new year, do you turn from the path of righteousness?”

Remember well did he the warnings of these four ghosts, yet he was not now trapped in half-sleep as he had been when they came to him that night. It was daytime, he was awake, and he clobbered each misty figure in turn with his cane.

“You are bound for damnation,” the ghostly partner moaned.

He strode through the gauze of their being without the least resistance, and the sky cleared. “If I am meant to enter the gates of Hell, I’m taking every penny I have ever saved along with me!” he cackled to them over his shoulder.

Onward he continued, knowing exactly the address of his destination. He decided as he went he would foreclose on the family that very morning, take everything they owned down to the nails in their shoes. He savored the moment when he would rip the crutch right out from under that handicapped child’s armpit.

The tabernacle bells still rang out through the city and would have been deafening as he walked directly beneath their tower had his mind not been so occupied. Without warning the chains of the bells snapped, they unraveled, and the great bells plummeted from the tower to the street below. They landed right on him, a crushing torrent of brass shattering and splintering onto the cobblestones.

The Londoners slowly drew close to the site of impact. The four ghosts filtered through the crowd for a better look. The charity sisters nearly lost hold of their box as they craned their necks to see.

From a near corner came the beggar girl out of the butcher shop. She stared down where the crowd was focused, then turned to face them all.

“Mercy,” the beggar girl mused. “If none of you mob have yet made a joke about ringing in the new year, shall I?”

Samuel Barnhart lives in South Florida, either slicing bagels or writing stories, depending on the time of day. His stories have appeared previously in Fabula Argentea, Liquid Imagination, and Page and Spine. New Year’s is his favorite holiday.

WHY WE CHOSE TO PUBLISH “And a Humbug New Year”:

What more can we say than we loved author Samuel Barnhart’s clever and unexpected twist on Dickens’ classic story? He folds so many great themes about human nature into this short piece, and we trust that readers can pick them out without being told what they are.

2 comments on “AND A HUMBUG NEW YEAR by Samuel Barnhart”