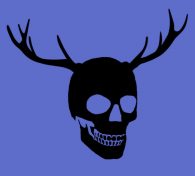 Anton was the first to suggest I get the antlers removed. He told me very nicely, over one of our Sunday coffees, picking the almonds from a piece of biscotti as he spoke.

“They’re just not you, Mar,” he said as I scowled down into the dregs of my latte. “I understand why you’d want to express yourself, and I truly haven’t got anything against that, but it’s just that they’re…” His eyes flitted to my head. “These are just so—”

He shook his head. “Not cliché, just…”

He never finished his sentence. He didn’t need to. I knew that “cliché” was exactly what he meant, even if he was too kind to say the word himself. In a sense, he was absolutely right. Everyone was getting implants those days: tails were all the rage, preferably nice and furry, with wings as a close second (these might have been at the top had they been fully functional, but designers still hadn’t quite figured out how to calibrate to the decidedly solid skeletal structures of humans, and even the most expensive pair would only get you off the ground for a few seconds, tops). Those were the most common trends, but they weren’t the only ones, either. People got creative: I’d seen everything from scales to hooves in the last week alone. Antlers started cropping up in our little circle of acquaintances for about a month, starting with Sarah’s decision to get them in after a particularly messy breakup.

“It’s a whole new me,” she’d proclaimed once the incision wounds had healed, tossing her hair regally. I told her the new look was supremely stylish, though in truth, I found it ghastly. It took me a little while to come around to the idea, and even then, it wasn’t until I saw the new salon open downtown that I decided to go get some myself.

I went on a Thursday afternoon. Maybe it was a Friday, actually. I’m not entirely sure. They had to snip away some tissue to get the palms solidly attached, and my memory’s been a bit unreliable ever since. I remember my stylist’s name, though, because she told me the story behind it. She was called Portia, which meant “pig,” and it was upon learning of this meaning that she got her first implant: a wide, smooth snout. She explained all this to me as she parted my hair, cut away at my scalp, and had me choose between the usual plastic and slightly lighter (but more expensive) wood models. I asked her off-handedly if the procedure had hurt, and she gave a snort-laden laugh, explaining that it never hurt if you went to a good place—they’d long since refined the localized anesthetics, so you could barely feel anything at all. I relaxed at that point, probably visibly—I’d been rather uncomfortable, anticipating the drill going into my skull. Besides, Portia went on, even if it did hurt, it wouldn’t matter, because the whole thing was for a good cause.

For a second, I had no idea what she was referring to, but then she was off on some diatribe about zoology and conservation and raising awareness, and I realized she must be one of those visible activist types, the kind who’d launched the whole trend in the first place. As she jammed the needles into my temples and a pleasantly starry feeling came over the top half of my head, she explained that three percent of proceeds from implant sales actually went to conservation societies, meaning that not only was the phenomenon fashionable, it was also a form of solidarity. Which was great, she concluded, because obviously the eco-stuff was important and all, but who could be blamed for not having it on the top of their mind, or even for not thinking of it at all? It wasn’t like most people saw animals every day, unless of course they’d somehow ended up working in the cosmetics industry or had unlimited access to the biohistory archives.

By the time Portia was finished going through all this, the procedure was almost over, and I stared at myself in the mirror for a solid few minutes when the whole thing was complete. For a second, I didn’t quite recognize myself. My hair was kind of staticky where the palms went into my skull, and my head felt so much heavier than normal. I thought for a second of the freak story we’d all heard in the news a few weeks ago, some girl who’d cracked her spine getting a pair of too-long antlers, but I shook myself out of that quickly. That barely happened to anyone, especially in high-quality salons like this, and besides, it wasn’t just some sort of vain statement, to get this kind of procedure done. I was taking care of myself, giving myself the special treatment I deserved, and it was in support of a cause too. I was raising awareness, bringing people’s minds to the importance of whatever long-dead creature had sported these accessories just a few decades ago.

I got up and paid for the procedure and left the salon. Over the next few weeks, I got lots and lots of compliments on my new aesthetic, and I grew increasingly comfortable with the specially designed pillow I needed to accommodate the implants and the importance of ducking when going through doorways. I didn’t end up having to use much of the antibiotics they gave me—infection risk was pretty low to begin with, but I was expecting at least a little itching or soreness, so I was pleasantly surprised when the swelling didn’t last longer than five or six days. I even changed my profile pictures on various social media accounts, and though I’d felt a bit nervous about how my parents and relatives might react, everyone was very complimentary, and my dad even mentioned that he’s considering getting some scales done on the back of his neck.

All in all, I was quite happy about the whole thing for the months to come, but then at the beginning of the summer, I started to realize that the charm was wearing off. Like I said, Anton was the first person to tell me this outright, and when he said it, I’d been pretty offended, seeing as I’d paid good money for the procedure. But then I started thinking about how everyone had implants, and I could barely think of a person who hadn’t gotten at least an antenna or two in the previous year, and the more I considered it, the more I realized that it was just so ordinary at this point to have antlers sticking out of my head. It’s been a week or two since I had coffee with Anton, and after talking it over with some friends of mine, I’ve pretty much decided that the antlers are done, so I’m going to call the salon first thing tomorrow and schedule a time to have them removed. I’m not sure what I’ll do after that, because I still want to be unique and individual and support the causes I care about, but I’ll have to think a bit harder about how to accomplish that. Maybe I’ll get one of those dorsal fins for the beach vacation we have planned in August. I bet it’d look really cute, and it’d make for fantastic Instagram pics. Plus, there was something in the news the other day about dolphins reaching full extinction, and I guess it’d be good to show the world how much I care.

Lucy Wallace is an emerging writer in the San Francisco Bay Area. When she is not writing, she can be found studying Russian and admiring toucans. She hopes to pursue a literary career of some sort, and she continues to hold strong beliefs about breakfast pastries.

WHY WE CHOSE TO PUBLISH “Antlers”:

We loved this piece with its message about fads and styles and how far they can go. Being clever and out of the box didn’t hurt our decision to publish it, either.