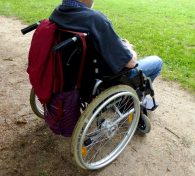 George Booth was ready to explode.

No one around him suspected it, simply because the ambience of the rec room at the Deering Oaks Senior Living Home had a calming effect on the residents. Most of them, anyway. So, as they sat there doing jigsaw puzzles, or playing Mahjong, or knitting, with soothing Muzak versions of their big band favorites playing on the scratchy PA system, no one paid any attention to George scrunched up in his wheelchair, fingers flying feverishly on his smartphone, his white hair whipping wildly about as he grappled with the latest hot new video game. No one noticed the grimace on his face nor the way his cheeks were glowing beet red. No one noticed the beads of sweat on his brow.

No one noticed anything unusual at all until he stood up from his wheelchair… and screamed, “A-r-r-g-g-h-h!,” and flung his phone across the room where it bounced off a cork bulletin board (“Don’t forget—Hawaiian Luau featuring Chef Marty’s spicy baked ham—Thursday!”) and landed with a thud in a potted plant.

Then they noticed. They all noticed. The room went pin-drop silent. All eyes (even the ones recovering from recent cataract-removal surgery) were laser-focused on George.

George noticed them, too. He saw their astonished stares. He heard the tut-tutting. So he grinned sheepishly, and with an embarrassed sigh, he flopped back into his wheelchair.

Split seconds earlier, as it sailed across the room, George’s cell phone had whizzed within an inch of the bulbous nose of Maude Bunce, another frail, white-haired, wrinkly, wheelchair-bound denizen of Deering Oaks. One of the knitters. She felt a whiff of wind as the phone whizzed by.

Her eyes followed the hurtling missile as it ponged off the cork board into the pot, then her eyes darted back to George, and she watched him flop into his wheelchair all red-faced and mortified.

She sprang into action.

She flicked the forward button on her powered wheelchair, cruised over, and snatched up the phone from the flower pot. She executed a perfect three-point turn between the wall and the Mahjong table, barely nudging the left knee of Wanda Wierzbicki (although Wanda would forever-after tell friends that Maude “practically ran her over, like a bat outta hell”), then she deftly slalomed through the couches and card tables, finally screeching to a halt, toe-to-toe with George.

She dropped the phone in his lap.

George looked at the phone and scowled.

“What’s the matter, dearie?” Maude asked. “Got a knot in your knickers?”

George grabbed his phone. He thumbed a couple buttons, swiped his finger across the screen a few times, then held it up for Maude to see. “I blew it!” he told her. “Cripes, I can’t believe it!”

She took the phone and examined the screen. It was teeming with fiendish-looking cartoon animals; many of them appeared to be armed. She handed it back to him. “You blew what?” she asked.

“I was on Level 12!” he lamented. “Three more Snorkers and I would’ve captured the Wiggly Wobbler!”

“What?” she sputtered incredulously. “Wobblers? Porkers? What in the…?”

George held up his phone again and shook it back and forth. “Hello-o-o, Earth to Maude. Welcome to the twentieth century,” he mocked. He pointed at the screen. “It’s ‘Flaming Weasels.’ Y’know? It’s an app.”

Maude tweaked the forward button on her wheelchair and glided up until she was right in his face. “First of all, George, it’s the twenty-first century. Has been for sixteen years. Write it down, it’s gonna be on the test.”

“And secondly,” Maude said with a note of technological superiority tingeing her voice, “that’s not an app. It’s just a dumb game. Apps do stuff. Like this…”

She reached into her robe and fished out her own cell phone. She pushed a few buttons. A brief refrain of some jazzy-sounding music played, then she held it up for George to see.

“What is it?” George asked.

“It’s ‘Koo Koo for Kardashians,’” Maude replied. “It’s space-age technology. A satellite sends you all the latest news about the Kardashians. Up to the minute.”

George took the phone and turned it around in his hand, examining it. “How does the satellite know?”

She was interrupted by another lively ringtone. She tipped her phone up and glanced at the screen. “See?” she asked, thrusting the phone toward George. “What’d I tell ya? Kalahari Kardashian just ordered a low-fat cocoa butter latte at Le Bijou Café on Rodeo. Less than two minutes ago.”

Maude shrugged. “I don’t know,” she said. “One of them. It doesn’t matter, George. They’re all important.”

George looked from her phone to his. “I think I’ll stick with ‘Flaming Weasels.’”

“Oh, frizzle frazzle, George,” Maude chided. “It’s just a dumb game. There’s no such thing as a flaming weasel.” She waved her phone in his face with a flourish. “This is the real world.”

George shook his head. “But I don’t give a hoot about the Kookooshians.”

“Kardashians,” she corrected him.

Just then, a woman with a wild shock of silvery-white hair, Eloise Laudise, hobbled by, stooped over her walker, which was covered with Grateful Dead stickers. “Mornin’, Maudie,” she said. “What’s the movie tonight?”

“Hello, Ellie,” Maude replied as she began clicking feverishly on her cell phone. After a moment or two she said, “The Bloody Butcher of Beantown, Part Two: There’s More Gore in Store.”

“Oh goody,” Eloise replied, grinning devilishly. “I just l-o-o-o-v-e the slasher flicks.” She winked at George as she hobbled off.

George watched for a moment as she and her walker zigged and zagged through the narrow spaces between the tables and chairs, then he turned back to Maude. “Criminy,” he said. “You’ve got an app for everything.”

“Yep,” Maude replied. “It’s called ‘Stinky Feet.’ You hold the phone by your feet, and it tells you if they’re stinky.”

George quickly sat up, straight as an arrow. “No way!” he cried out. He started taking off one of his slippers. “Here, try it on me.”

Maude rolled her eyes. “Duh, George,” she said. “I don’t have it yet. I just invented it. Somebody else has to make it.”

“I don’t know,” Maude answered. “Scientists or somebody.”

George scratched his chin, pondering. “But…” he wondered, “how are they gonna make it, y’know, smell your feet? It’s a phone.”

“Who cares?” Maude shot back. “They’re scientists, George. They can do anything.”

George looked at his own phone while he considered the possibilities. “Y’know, I think I’ll invent my own app. I’m gonna call it ‘C’mon, Let Me Have a Decent Bowel Movement Every Once in a While.’”

Maude chuckled. “You don’t need an app for that, George,” she offered. “You need a miracle.”

“You said scientists can do anything.”

“They can. They invented Metamucil. Give it a try.”

As she said that, she reversed her wheelchair and backed up a little so a small group of people could pass by in the narrow space between her and George. It was a middle-aged couple; the man was pushing an older man in a wheelchair. Two teenagers, a boy and a girl, trailed behind them, the whole family chattering cheerfully as they strolled along.

George’s eyes were glued to them as they passed by. As soon as they were out of earshot he sighed and said to Maude, “Maybe I should invent an app called ‘Get My Kids to Come Visit Once in a While.’”

Maude softened when saw the wistful expression on George’s face. “You’ve already got an app for that, George,” she said gently. “On your lap. Your phone. Why don’t you just give ’em a call?”

“I can’t, Maude,” he replied, shaking his head. “I’m just an old coot in a wheelchair. They’re busy people. It’s their world now; they don’t need another problem to worry about.”

She was interrupted by her cell phone playing the same jazzy ringtone. She tipped it up and glanced at the screen.

She fired up her powered wheelchair. “Sorry, gotta go. I gotta tell Gertie about the poo-poo at Hoopla. She’ll just die when she hears.” She maneuvered her chair past George’s knees. “See ya ’round the quad, George.”

She cruised down the aisle, and just before she left the room, she turned back and hollered, “Don’t forget, George, call your kids.” Then she waved, and she was gone.

George stared at his phone for a minute or two, then he laced his fingers, stretched his arms, cracked his knuckles, and shook it off. He took a deep breath. He picked up his phone and punched a few buttons.

But after a moment, he tensed up, his thumbs began flailing wildly, and his wheelchair shook and shimmied, bouncing to and fro.

Another game of “Flaming Weasels.”

Scott Merrow has been writing short fiction as a hobby since retiring from the Air Force ten years ago. He’s had a few stories published recently, both online and in print, with a few more forthcoming soon. Publications include The Literary Hatchet, Wordhaus, and Balloons Literary Journal, among others. He and his wife Paula also co-write short screenplays. To date, ten of them have been produced. Scott and Paula live in Colorado.

WHY WE CHOSE TO PUBLISH “App Happy”

Amid the smiles of this piece are some somber truths that give us wonderful insights into human nature at any age.