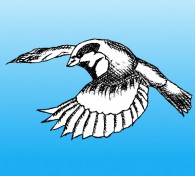 The sparrow landed on the window ledge at 5:36 pm.

Cecil knew this because lying in bed, too weak to move, he had little to do but watch the ornate wall clock tick away the last minutes of his life.

He awaited the sparrow without regrets.

The bedroom door swung open and a well-endowed rear end pushed through followed by a towel-laden Nurse Beryl.

Today she wore purple, rainbow-covered scrubs more suited to a pediatrics hospital than an old man’s bedroom, but her competent air and inane chatter helped him cope with the indignities of sponge baths and catheters, and for that alone he forgave her eccentricities.

Besides, he liked the way she filled out those rainbows. Adoration of big women was never a regret, and hell, he wasn’t a dead man yet.

“There’s my favourite patient. How was your nap?”

Disappointing, realized Cecil. I woke up.

“Oh my, you look grumpy. Are we having a rough day? Let’s take a little look.”

Nurse Beryl set the stack of linens on the table and jiggled to his side. She pulled a pen from her hair-sprayed bun.

Cecil studied her face as she took his vitals and chattered on about the neighbour’s new cat – how it used his garden for a toilet, leaving behind every germ imaginable.

“Had to take my broom to it this morning – just to scare it mind you. Animals carry all kinds of disease, and that’s a fact.”

She placed the stethoscope to his heart.

Nurse Beryl’s lips smiled, but her forehead frowned, and Cecil saw concern in her eyes. He might have felt regret except she confirmed what he suspected, and a calm relief flooded through him instead.

“Just as shipshape as ever.” She jabbed the pen back in her hair and bustled around the room, checking corners for imagined cat dander.

At the bookshelf, she paused. “What shall we read tonight, something nice and long. How about your favourite book of mythology?”

She removed a thick volume and carried it to the window, then stared through the glass and sighed, oblivious to their guest perched on the sill.

“The sun is already setting. It makes me sad this time of year, that bite in the air, all the flowers gone, but there’s magic in the scent of an autumn’s night. Do you remember?”

Through the taint of antiseptic and sickness, Cecil strained to grasp the sweetness of maple syrup and apple cider, of wood smoke and frosted grass, but the sensations eluded him. Cherished memories made golden by the smell of fresh hay were now just pictures on the wall – flat and devoid of texture.

Sorrow overtook him, a loss so deep it hurt, and Cecil fought against the panic it brought.

If he was allowed one last wish, he used it now and summoned the strength to lift one finger towards the window. His dry lips opened and closed in a vain attempt to form words.

“Oh my, listen to you. I guess a few minutes won’t hurt – promise not to tell?”

She winked and Cecil sagged back, exhausted.

Nurse Beryl heaved on the window but it refused to budge. Undaunted by mere wood and glass, she braced beefy legs and shoved with all her might.

She inhaled with gusto and turned towards him.

There was a blur of feathers as the sparrow shot through the window to perch on the pen in Nurse Beryl’s bun.

She screamed and launched the book through the air as she abandoned it to slap at her head.

The sparrow took flight and Nurse Beryl chased after it, her body an uninhibited dance of movement. Every part of her bounced and rolled while Cecil appreciated her sumptuous form like a last meal.

“Out! And take your nasty bird germs with you. Can’t you see there’s a sick man here?”

Cecil watched it all in wonder and knew it for the crowning moment of his life. Laughter filled the ragged hole of regret and pulled his voiceless mouth into a grin.

The sparrow landed on the clock, well out of reach of Nurse Beryl’s red-faced ire.

“Oh…shoo. You may have feathers to keep you warm, but this poor man doesn’t.” She looked from the window to Cecil and huffed in exasperation.

“Fine. You’ve forced me to bring out the heavy artillery.”

Nurse Beryl stormed from the room.

Cecil looked up at the clock.

“Thank you for coming. Will you show me the way?” and was surprised to feel his lips move, to hear his own voice.

The sparrow studied him, its head cocked to one side, and Cecil swore he saw compassion in its eyes.

The curtains billowed with a damp, pine-scented breeze that cooled his fevered skin and brought with it all he thought lost: evening walks through the fields, misty breath to mark his way, the smell of endings and beginnings laced with cinnamon and pumpkin pie.

He remembered a boy, the North Wind on his cheek, who stood beneath the blazing maple tree outside and thought he could stop winter if he caught the last cascading spark of fall.

He closed his eyes and was beneath those sheltering limbs, never feeling more alive, ankle deep in golden leaves infused with earth and endless cycles. When the last one spiralled down, he reached out cupped hands, then changed his mind and let the leaf slip through gnarled fingers to rest gently on the ground.

Cecil opened his eyes and looked at the sparrow as the final minute ticked off the clock. His gratitude for this gift had no words.

I’m ready, he thought, and the sparrow coasted to the window.

An old man left the ravages of his body as he rose from the bed to follow his guide across the room. The child who reached the window turned to see Nurse Beryl burst through the door.

“Oh my,” he heard her say before her broom clattered to the floor and he flew off into autumn’s night.

l. a. James is an emerging Canadian writer with roots sunk deep in the Pacific Northwest. Her short work has appeared in Luna Station Quarterly, Twisted Dreams Magazine and Running Out of Ink. Her first novel, Echoes of the Weave, is out in the world looking for a home.

WHY WE CHOSE TO PUBLISH “AUTUMN’S NIGHT”:

This emotional piece with its touches of humor captured our hearts and, we hope, will do the same to our readers. Author l. a. James plays the two characters off one another in a way that we can perfectly picture and wraps up the piece on a magical, uplifting note.

CALL ME TOM by Heather Boyd

AUTUMN’S NIGHT by l. a. James

THE READING TEACHER by Nick Wolven

COFFEE IN THE AFTERNOON by Christopher Chinchilla

PLAYING AGAINST THE ODDS by Dolly Garland