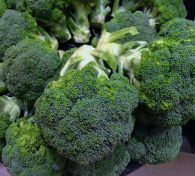 In the newspaper he read about a massive earthquake in South America. He went to the store and purchased the ingredients for an earthquake kit. On cable news he saw breathless coverage of the latest drug-resistant, flesh-eating superbug spreading throughout the world. He bought a biohazard suit and three cases of hand sanitizer. On the Internet he read about terrorists plotting a nuclear attack on his city. He built a massive bomb shelter in his backyard and stocked it with supplies and electronics.

His email contained a message listing hundreds of foods that doctors now considered carcinogenic. Almost everything in his refrigerator was on the list. He tossed it all into the garbage, went to the market, and bought twenty pounds of organic broccoli. Then he called his health insurance broker and upped his coverage.

For months he huddled in his bomb shelter wearing his biohazard suit, eating organic broccoli and watching events unfold on cable news. Society was in tatters, or so it seemed from the coverage. But he was prepared for the apocalypse and would milk every last second on earth.

One day, while he was watching the news and chewing that rancid broccoli, the television died. He fiddled with it to no avail. He tried the computer. Nothing. The power was out. He panicked. Without the latest news updates, how would he know what to worry about?

As he paced in fear and confusion, he heard a noise outside. Wary of terrorists and germy refugees, he considered grabbing his shotgun and barricading himself inside the shelter. But curiosity got the better of him. He unlocked the door and peeked outside.

The noise came from over his backyard fence. His neighbor was tending her garden, singing and dancing to some outrageous disco music. He was surprised to see her, thought everyone was sick or dead or cowering underground.

He watched her sing and dance, scratching himself beneath his biohazard suit. The thing had begun to chafe. Sunlight made it worse. And it stunk like hell. He stripped it off and stood there naked, smelling the scent of flowers and earth, feeling the fresh spring air wash over his skin.

It was strange, feeling something, not thinking it.

He glanced back inside his shelter, instinctively craving a breaking news update. Desperate for it. But he realized, standing in the fading sunlight, that it was too late.

Disease had already infected him.

He tossed his biohazard suit in the trash and left the bomb shelter and his emergency supplies and breaking news updates and bloated insurance coverage and walked up the hill and sat down on a rock and watched the sun set over the Pacific Ocean.

Tom Mahony is a biological consultant in California with an MS from Humboldt State University. He is the author of the novels Imperfect Solitude, Flooding Granite, and Pacific Offering. Visit his website at www.tommahony.net

WHY WE CHOSE TO PUBLISH “Biohazard”

This is one of those satirical pieces that pretty much speaks for itself and that doesn’t need a justification for its publication. In any event, author Tom Mahony reminds us of human foibles and the dangers of getting carried away.