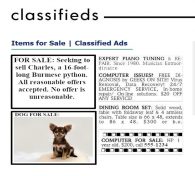 It had taken Liam three years to work up the courage to admit he despised and genuinely feared Charles. Charles was no longer a respected member of Liam’s family, let alone a tolerable roommate. Liam had finally realized that it was a matter of safety—he needed to get rid of Charles through any means necessary, so he took to Craigslist.

“Seeking to sell Charles, a sixteen-foot-long Burmese python.” Liam, with his fingers nervously hovering over the keyboard, dared to glance at the corner of his room, where the inch-thick glass tank held back Charles. The snake opened one eye and its slitted pupil seemed to focus on Liam. Charles flicked his tongue lazily as he stared at his owner, and Liam got the distinct impression the snake was sizing up his next meal.

Trembling slightly, Liam stared at the screen of his computer and continued typing his Craigslist ad, though now he instinctively angled the laptop screen away from Charles, as if he was afraid the python would discover his plans. He looked over what he’d written, hoping it could make Charles seem like a family-friendly pet, but no matter how much he wanted someone else to free him of the snake for good, Liam morally couldn’t bring himself to omit certain information from the ad. Hesitating, he typed, “Charles needs his dinner at exactly 8:30 p.m. Otherwise he gets vengeful and weasels his way out of the terrarium to take matters into his own hands.” Liam shuddered, remembering how his landlord had already lost two Chihuahuas to his snake’s hunger-fueled wrath, and he left the warning in.

He glanced up at the snake once more to see the rectangular eyes still boring into his neck. Liam wiped drops of sweat off of his forehead and finished the ad with “all reasonable offers accepted. No offer is unreasonable.” He posted the ad and continued staring at the laptop screen, waiting for responses that would never come.

Rebecca Rhodes is a young author from Baltimore, Maryland. She writes in every genre, from poetry to fiction, but enjoys writing humor the most. She currently resides in Southern California to attend college for writing. In her free time, she enjoys memes, poor-quality movies, and eating virtually any kind of food imaginable. She plans to publish several collections and books in the upcoming year.

WHY WE CHOSE TO PUBLISH “Charles”:

The fact that I once had a roommate who owned a Burmese python had nothing to do with our accepting this lovely piece. My roommate’s snake at the time he bought her was about three feet long. When he moved out of town, he gave the snake into the care of someone I knew at work. The last I heard, the snake had grown to ten feet long just a couple of years later (I think he overfed the snake). But that was thirty years ago. Burmese pythons only live for about twenty years. Pythons are generally not a threat to humans. But if I were poor Liam, I’d probably be wary of a sixteen-foot-long python.

In any case, author Rebecca Rhodes crated a lovely piece of flash fiction laden with wry humor in only 327 words that just begged for us to publish it. We’re sure you enjoyed reading it as much as we did.