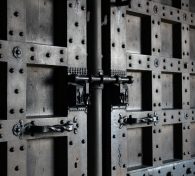 The ankle bracelet does not chafe. In fact, the folds of white silk that hide the black leather are exceedingly soft against her skin—but a shackle, no matter how splendid, is a shackle. A single step beyond the invisible electronic boundary would alert her captor’s henchwomen. They would rush to hide her defiance behind a human curtain so congregants would not see. Not that it matters. Her captor, the Preacher, has spread the lie that she is his ardent partner and now the world believes.

From the edge of the stage she watches eager throngs entering the Preacher’s gaudy arena-sized cathedral. She hears the sysadmin shout that millions are streaming. But, of course, tonight is special… tonight the Preacher will do more that preach. He will make the blind see, the crippled walk, the diseased whole.

“Sister Nuri, come,” the Preacher orders. Obediently she walks at his side into the spotlight. He smells of cedar and cardamom and wears a navy suit that makes his surfer-blond hair blonder and his sea-blue eyes bluer. She wears what he has mandated: a floor-length ivory tunic, embroidered with claret peonies.

The Preacher shuts his eyes, raises his hands, and in a rich baritone delivers the opening Greeting, “I am here that they may have life, that they may have it more abundantly.” As one, the congregation responds with a thunderous “Amen.” Then the first thirty of a hundred chosen sick are carried to the stage. The Preacher welcomes each with his showman’s wide smile.

Twelve henchwomen, the Cathedral Choir, form a circle around her and the Preacher and the first of the thirty. With her fingertips, she brushes the wrist of each singer, careful not to pause. The crimson seed in her mind grows with each encounter. Then the Preacher places a palm on the sick man’s forehead and commands, “Flee, demons tormenting this man.” She knows this is nonsense: there are no demons, only a body needing repair. She kisses the sick man’s neck on his pulsing artery, releasing the crimson seed into his skin and blood. A tiny red welt marks the spot. In seconds, his body is mended and the man rises and babbles, “Preacher, you’ve cured me.” The frenzied audience roars, “Praise be, praise be.”

After the last of the thirty is mended, the singers are listless and she is near collapse. The Preacher has no choice but to close. He repeats that cures are not miracles—just proof of the Divine Spirit manifested though his servant. He promises the congregants that if they have faith, the Divine One will return their donations nine-fold. Lights dim. The service is over.

She climbs into the limo for the drive back to the compound, separated from him in her cushion-lined cage. As they ride, she thinks of her foremothers, travelling caregivers who were hunted down while they tried to fight the Great Plague. Those caught were burnt at the stake or shut up in nunneries. Through chance and wit a few had survived, living free in the marginal lands, and so her line had not died away.

He had hissed, “Vile succubus,” as he flailed with his silvery cross, cutting so deep that silver contaminated her blood. But the driver had whispered before passing out, “Preacher, her ain’t no evil, her saved my life.”

She remembers the Preacher’s eyes narrowing with cunning.

She remembers the struggle to rise as the silver paralyzed.

She remembers the Preacher dragging her, his belt her leash.

The limo halts at the three-room bunker where he keeps her. As always after a triumphant service, he stinks of sweat and lust. She taunts him as she unbuttons her tunic, daring him to fondle. But, as always, he does not dare and curses her instead. Then he boasts that the suckers have pledged $14,000,000 and paid another $9,000,000 for video files. As she hears the bolt slide, locking her in, she wonders which of them is the true vampire.

Alyce Campbell was born in Alberta, Canada but has also enjoyed living in British Columbia, Oregon, California and Virginia. She has degrees in Geology and Finance. Over the years, Alyce has worked in a variety of finance and software jobs as a teacher, writer, and product innovator. Alyce’s first novel, Fatal Code: The Gilgamesh Killings is available on Amazon.

WHY WE CHOSE TO PUBLISH “Crimson Seed”

Since we started the magazine, we have been looking for a good vampire tale to publish. This piece was the winner of the most recent Quicksilver Flash Fiction Contest at Silver Pen Writers. We provided the prompt for the contest, crossed our fingers, and we got our winner, a clever twist on a vampire tale with a good bit of irony.