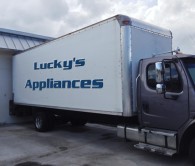 or
IT REALLY DID FALL OFF THE TRUCK

“You, my friend, are a pessimist.”

“Situation wanders along, you see it as a problem. I, on the other hand, being an eternal optimist, view things as opportunity.”

“How’s stuffing Lucky Marantz into a freezer an opportunity?”

Little Ray Solarno and Tony Nappolino each influence a cigarette whilst contemplating this “situation” as they lean against the freezer in question, which rests upended and askew in Tony’s garage, at his house in Massapequa. On the floor between them, wedging out from under the freezer, splay the mangled remains of the ill-forecasted, Lucky, an icepick protruding from his neck.

“Lucky runs, what, six-eight, six-nine? A large gentleman by any standard who took gleeful occasion to laud his vertical facility over everyone, so to speak.”

Tony shoots him a look.

“Your position on the matter has been accordingly noted. Now, Lucky also sported a malodorous peculiarity in the form of putrid pods.”

“I don’t know nothin’ ‘bout that, but his feet really stunk.”

“Exactly. Now I ask, if you knew your feet stunk would you be taking your shoes off at every opportunity?”

“Maybe, since he was so tall, he couldn’t tell his feet smelled.”

“Point. I had not considered that scenario. Be that as it may, with a few judicious alterations we have opportunity here to send Lucky off to his final reward with the subtle reminder to be less obnoxious in the next life.”

“And to keep his damn shoes on.”

Forty minutes of professional industry and corpus de-Lucky is safely ensconced in the freezer—his body resting in profile facing his detached legs, the toes of his bare feet nestled at nose tip. The icepick still protrudes from the base of his neck.

“Hey, Tony, is it ironic there’s an icepick in a frost-free freezer?”

“Amusing, yet I do not believe it reaches irony. It is more at incongruity married to a bit of whimsy. Much like something the artist Banksy might contrive to express outrage towards the marketization of the masses at the cost of self-expression.”

“I was thinkin’ Damien Hirst and his leitmotif through dissection to white male forfeiture of world dominance.”

“So why stick him with the icepick?”

“Send a message. Whoever takes delivery, be it Saint Pete or Beelzebub, they are going to know he came from Icepick Tony Nappolino. That way, time comes, I show up, they will be treating me with some kind of respect.”

“It is at that. Now let us get this loaded. We have to be out of here before Jackie gets home or I will never hear the end of how I ruined her new freezer.”

Ulysses Q describes himself as “Just a cat who arranges words on page—pushes pigment and pixels around on varying planes—captures moving visual imagery in all of its forms and functions—throws a mean pizza.”

WHY WE CHOSE TO PUBLISH “Does a Paradox Beat Three Conundrums?”:

We see too few humorous pieces in our submissions, so we like to publish them (assuming they’re worthy) when we do receive them. This issue abounds with humor.

When this piece appeared in the workshop at the Silver Pen Writers Association, we knew we had to grab it up. It has that mocking Pulp Fiction feel, but author Ulysses Q also has a good ear for dialogue and a good deal of irony.

We should perhaps comment the title (which originally was just “It Really Did Fall Off The Truck”). The author views the entire piece as a paradox of contradictory elements, and as for the three conundrums, they are

1. What to do with Lucky’s body?
2. Why would anyone take off their shoes if their feet smelled?
3. Why is there an icepick in a frost-free freezer?

But we trust you enjoyed it either with or without the explanation.

OUT OF THE DOGHOUSE by Gary Beck

DOES A PARADOX BEAT THREE CONUNDRUMS? by Ulysses Q