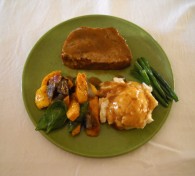 Peggy gave her big brother that look, the skeptic face normally reserved for her four-year-old son when he announced he could fly or had mysteriously become a black belt in karate.

“You quit your job to start a band?” She grimaced at the mediocre Chardonnay the waitress had just set down. “What’s the punch line to this joke?”

“No punch line. No joke. I just wanted you to know what was going on. Big changes in my life. We’ll rehearse a few weeks, then hit the road. We’ll be touring a lot. I probably won’t see you as much,” Frank announced.

“OK, my biggest fear is that you aren’t kidding,” Peggy said, tapping her index finger on the table to contain her anger. “Frank, I know you’ve been in the midst of some kind of freaky mid-life crisis since Cindy left you. I kept my mouth shut when you got the awful haircut and ridiculous tattoos. I didn’t say anything when you started wearing those gross leather pants and traded your beautiful Mercedes in for that creepy old hearse…”

“Whatever,” she snapped. “Whatever the fuck it is, it isn’t normal. You are fifty-two years old. Middle aged. Not at a time in your life when leather pants and a nose ring are flattering. For God’s sake, have a little dignity. Have you forgotten you’re a highly paid, respected lawyer? An important guy in this community? You can’t start looking like a homeless gay sailor, hanging around dive bars with twenty-year-old crack heads, and then announce you’re starting a band. You don’t even play an instrument.”

“Not true,” Frank smiled calmly. “I play the iPad guitar. Been playing almost six months, and I’m pretty damn good. There’s an App for that,” he laughed. “And I sing. Been taking lessons. Trust me, Sis, this is a good thing. We’ll be really big.”

Peggy pushed fingers hard into her temples. “And what kind of music does your band play?”

“Meat Loaf,” Frank said, as if announcing the winner of the Nobel Prize.

“Meat Loaf? The crappy food, or the pudgy guy from the ’70’s?” Peggy couldn’t believe this situation could get even stranger.

“Meat Loaf—Mr. Marvin Lee Aday—one of the greatest rockers of our time. C’mon…. Paradise by the Dashboard Light, Bat Out of Hell, I’d Do Anything for Love. He’s sold over eighty million albums. Still sells a couple hundred thousand a year,” Frank said defensively. “People absolutely love him. He’s timeless. And they’re going to love our take on him.”

“So you’re going to abandon a thirty-year career and all the money. What do you make, three, four hundred grand a year, to be in a cover band for a washed-up act from forty years ago? Maybe play weddings at the Butte, Montana Elks Club? ”

Frank smiled serenely at his sister, like a man that had solved life’s most difficult problem.

Eleven months later he was sitting in the Green Room at The Tonight Show when Jimmy Fallon burst through the door. “Frank, oh my God, I’m so happy you’re here. I’m a huge fan. Huge. I saw you last weekend at the Hollywood Bowl playing with the symphony. Un-fucking-believable. I’ve never seen anyone wail on an iPad the way you do. And stretching Paradise by the Dashboard Light into an operetta. That was brilliant.”

Frank gave Fallon the same knowing smile he had flashed at his sister. “Thanks, Jimmy. Everyone loves Meat Loaf.”

A refugee from the advertising world, Timothy O’Leary is the author of the non-fiction book Warriors, Workers, Whiners & Weasels. He was a finalist for the Mississippi Review Fiction Award, and his stories have been published or are upcoming in Lost River Review, the anthology And All Our Yesterdays, and Talking River. He also knows a lot about 1970’s rock and roll

WHY WE CHOSE TO PUBLISH “Everyone Loves Meat Loaf”:

Sometimes a piece crosses our desk and demands that we publish it. Timothy O’Leary’s excellent flash fiction piece did just that. There’s no message or meaning to it other than being well-written and over-the-top funny. What’s not to love about a character who plays iPad guitar?

OUT OF THE DOGHOUSE by Gary Beck

DOES A PARADOX BEAT THREE CONUNDRUMS? by Ulysses Q