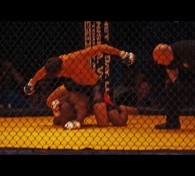 “You’re next!” coach screams. “He just finished it with a rear naked choke.”

Jesus, why am I doing this?

My heart’s beating so fast I can’t hear myself breathe.

Am I breathing? Breathing is the most important thing. Slow your heart rate.

For the briefest of moments, the panic wells up and threatens to consume me.

Relax, you want to be here. This was a choice.

No matter what I say inside my head, my body knows it’s about to climb inside a metal cage, where a temporary enemy waits for combat. It’s not life or death; it only feels that way. I respond accordingly: dizziness, dry mouth, shaking, self-doubt, anxiety; adrenaline surges.

Our whole lives most of us are told fighting is wrong; violence isn’t the answer; use your words, not your fists. As kids, it seeps into our most fundamental level of consciousness. A different part of me, a newer part, disagrees. Fighting’s how disputes are handled in nature; conflict is an inherent part of us. I’m a Mixed Martial Artist (MMA) and my sport is recognized by the whole world, thanks to the UFC (Ultimate Fighting Championship), but some remnant of my childhood still thinks it’s fundamentally wrong to hit another person.

I squash that thought hard and fast. I have no room for weakness now.

“Your music just started,” my coach says. He rubs my shoulders and slaps me a couple of times, waking me up. “Let’s walk.”

Still want to back out? my inner voice asks. You’ll probably lose anyway. I ignore him and mute the coward to a dull background buzz in my mind.

I prepared six weeks for this, poured blood, sweat, and weakness onto those mats, forging my body into a weapon, all for this one moment in time.

No way do I want to back out.

I trained to ignore pain, holding weights over my head while friends assaulted my body with kicks and punches until my legs and arms failed me. I drank water while others enjoyed alcohol, spent hours at the gym while they played video games, went to bed early while they raised Cain till the sun came up.

I pushed my body past its breaking point, beyond injury and ache. I cut weight, choosing hunger and thirst for a week. I watched my friends put away pizza and beer while I sweated out precious pounds in thermals and blankets, dehydrated, grinding my teeth in a tortured smile.

No fuckin’ way do I want to back out.

That’s the biggest part of me, the strongest voice.

But a smaller part screams: run, hide, it isn’t worth it. I don’t listen.

Coach (Sensei we call him) senses my anxiety. “The hardest part is over. Training and weight cutting are done. All that’s left is the fun part.”

I smile, and the nerves disappear. They always do. I start to get excited, and an odd, sinister grin replaces the pressed lips and clenched teeth.

Remember, it’s not real, it’s a sport. Pops fought for real, loaded shells on the Lucky Lou in the Pacific. People are still fighting for real; dying for real… they fight to the death. You fight for fun.

I shame myself for feeling nervous or anxious. I think about my friends who served, I think about reading Fearless, about Adam Brown and the family he left behind in putting other lives before his own. I think about the trip to Washington when I was a kid and how small I felt in the presence of the memorials to those who’d died fighting for freedom… fighting for real.

It’s just a mental trick, comparing the insignificance of my fight to a real one, but it helps tremendously. Fear disappears, making way for respect, gratitude, and eagerness.

Still, it doesn’t take it all away. Nothing can. It’s my body’s natural response to immediate danger—fight or flight. I can’t fight yet, not until they ring that bell, but I could fly… so that’s what my body’s telling me to do. I ignore it.

It’s the beginning of the walk to the cage. My music’s getting louder; it’s hard to hear over the crowd.

They huddle around me, my friends and training partners. They’re all a part of this. You can’t train alone.

“God give me fast hands, quick feet, strong hips, and an iron chin. Watch over all of us, and if it be Your will, grant me victory tonight in the cage. St. Michael Archangel, defend me in battle, be my safeguard against the wickedness and snares of the Devil…”

In this moment of unity with everyone, the last shred of worry evaporates, I feel connected, concentrated energy, and while I can’t know whether He approves of my chosen sport, I feel empowered nonetheless. The prayer finishes and the walk begins.

It’s a weird thing, the walk through the crowd to cage-side. Their excitement is palpable, and my peripherals catch the small section of my supporters in the balcony going crazy and chanting my name. I hold out a fist to them but don’t look. I can’t lose focus now.

I strip down to my fighting gear: tights, cup, mouthpiece, MMA gloves. I get checked and greased (a little Vaseline over the eyes—like it fuckin’ helps; I chuckle when the ref makes sure it’s only a little over each eye). The fight team is behind me: Chris, David, Quick, they all helped me prepare for this. They’re brimming with confidence and excitement. It puts fire in my spine, and eagerness increases.

We share brief hugs with fists clenched, but my mind is already in the cage. There’s no more thought, no more emotion. Every second is its own lifetime.

In the small scrap of time left, calmness washes over me and my body feels light and relaxed.

There’re no words to describe it; it’s hard to even remember. The before and after I can recall with vivid clarity, but the actual fight… I’ll fill in the memory when I watch the film. My hands shake a little just trying to relive it.

My body tries to tense up from adrenaline; I remain water.

It’s a mantra that keeps me calm, a snippet from a black-and-white Bruce Lee interview I saw once.

I’m loose and fluid until the moment my attack makes contact with him. I step and move and jab and kick. All these things happen, but there is no thought, only instinct trained into muscle memory and reflex with countless repetition.

When you’re fighting, there’s no past, no future—only the present. It’s a strange, addicting sensation. Every iota of awareness you have is devoted to what’s happening that very second, and you exist instant to instant.

The taste of copper fills my mouth with a red smile. Part of me hears my coach’s instructions, single words all with substantial meaning.

Time doesn’t exist in the cage. A fight begins. And then it ends. Sometimes abruptly; sometimes not.

I’m engulfed by the struggle, completely absorbed into another world.

I’ve won, or I’ve lost. It doesn’t matter which.

I smile through the bruises.

I’ve beaten fear for the night, and he knows it. He goes away and sulks in the corner, but he’ll be back tomorrow—win, lose, or draw.

And I’ll be ready… to fight again.

I am a part time writer with full time passions, enthralled by martial arts, captive to adventure, always entrepreneurial, and never bored. When I’m not training, spending time outdoors, or speculating on the nature of reality, I can be found writing short ridiculous essays and picking on my favorite old guitar. I’m always looking for another mountain to climb (rock climbing is my most rapidly growing passion) and plan to sail around the world writing in the future.

WHY WE CHOSE TO PUBLISH “FIGHTING”:

Not every piece that we publish comes from direct submissions. As part of Silver Pen, we sometimes spot a piece posted there for critique that we think could be perfect for us. When we do, we work with the author to polish it for publication.

Fighting is one of those discovered pieces. We like that it’s very personal, almost a personal essay, but it goes beyond that to become a story with internal conflict and strong resonance. We’re taken into the fighter’s head and shown his emotional perspective. And despite the title, it’s really not about fighting, not completely.