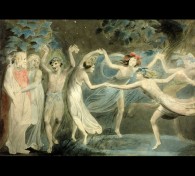 Lord, what fools these mortals be!

They can’t even get a simple story straight. Whatever parts of our history have filtered down to them, they seem to chop and change until they get it as they like it. One forest is as good as another to them, I suppose. A name change here, a time shift there. And it always has to involve them. They didn’t come into it until much later, believe me. But that’s typical of them. Short lives and no responsibilities. And they call us tricksters! They couldn’t even get a simple case of gender right. Perhaps it confuses them that our boys are as pretty as our girls, and our women as athletic as our men? But – no – I can’t blame the mortals for that one. That’s entirely Titania’s fault.

So let’s start by getting some facts straight. The forest was not in Athens. I mean, have you been to an Athenian wood? Fauns and dryads everywhere. You can’t get a moment’s peace for them playing on those blasted syrinxes and dancing, dancing. Bacchus and his never-ending rivers of wine. And I won’t even get started on the centaurs… No, we lived in Windsor Forest, along with poor old Herne the Hunter, around the time he got his stag’s antlers. Same place where fat Falstaff reckoned he could see us. He didn’t, of course, but that’s a different story.

Here’s another fact for you. I was the cause of the trouble between Oberon and Titania, not some Indian changeling. They all get adopted by apsaras and gandharvas before they have a chance to leave the sub-continent. And who’s going to argue with that? Most fairies round my way wouldn’t think of going any further than Richmond for a page boy. On a good day. And me? Oh yes, that’s the best one of all. Robin Goodfellow, the mortals call me. Puck, the mischievous hobgoblin. Well, this hobgoblin has news for you. I’m a girl. And Oberon is my definition of a midsummer night’s dream.

I first saw him in the water. I’m a well-sprite by nature, so scrying comes easily to me. There he was: Oberon the Fair, love-child of Morgan le Fay and Julius Caesar. I’d heard of him, of course. What fairy hasn’t? But hearing and seeing are two different things. Let’s say Oberon certainly lived up to his name. The only thing not fair about him was the fact that he was married to that cow, Titania. Well, I had to get her out of the way. Call me immoral? I’m a fairy. And, besides, you mortals have room to talk!

I could see I wasn’t going to stand up to Titania in looks. Famously the most beautiful fae in Albion. Why do you think Oberon had to have her in the first place? And I’ve never been very good at the glamour. My party piece is turning myself into a three-legged stool and then disappearing from under some old wife’s backside. But there are other ways of getting to a man’s heart. Witty banter, for one thing. Titania’s never been famous for her sense of humour.

All I had to do was get her out of the way for a while, so I could work my charms on the Fairy King. Like I say, Herne the Hunter was knocking about the woods in those days. And it’s a well-known fact that drop-dead gorgeous fairy women have a bizarre weakness for rough, mortal ranger-types. A drop of love-in-idleness on her eyes while she was having a quick beauty sleep. A whiff of one of Herne’s discarded arrow fletchings under her nose. And she was away after him like a hound on the scent. Result. Time for me to move in on Oberon.

I used the old “one of the lads” technique. Jesting to Oberon and making him smile. Neighing in likeness of a filly foal, that sort of thing. Within half an hour, he had his arm round my shoulder, head against my neck, tears of laughter rolling down his cheeks. Then his fingers in my hair and his lips on my forehead. Then… Well, you get the picture.

And it would have been all right if not for one little problem I hadn’t counted on. Somewhere in between my dripping love potion on Titania and working my comedy routine on her husband, Oberon had decided he was sick to the points of his ears with Herne traipsing all over his forest, shooting any deer he felt like, and decided to curse him with a stag’s head. So, when Titania finally catches up with the so-called man of her dreams, there he is: half-man, half-roebuck. Major turn-off. Unfortunately, not for Herne. It’s kind of an unwritten rule that, whenever a mortal man encounters a fairy woman, he falls desperately and tragically in love with her. So, in a matter of minutes, he’s whispering sweet nothings to her with bits of fern sticking out of his mouth. Titania picks up her skirts and runs like a deranged boggart. Herne’s straight after her, and what with his famous hunting skills, she’s got no chance of getting away. Who’s she going to run to? Only her flipping husband.

So that’s where the story comes back to me. There I was, lying on a bank where the wild thyme blows, Oberon’s tongue halfway down my throat. All of a sudden, Titania burst into the clearing. And let’s just say, she wasn’t too pleased with what she saw.

I think that’s a rough translation of what she said, although her tone was so loud and shrill that there were bats with earache for weeks afterwards. Shocked the life out of me too, I can tell you. I was so scared, I accidentally transformed into a roasted crab. Bit Oberon’s lip. He swore, flicked me across the forest, and I landed head-down in a hollow tree. The shock of it transformed me right back, and it took me half an hour to climb out.

I’d like to say that was the end of the story and I crawled back to my well with only a few bruises and the memory of Oberon’s very experienced kissing lips on mine. But I’m afraid Titania caught up with me. And she’s not what you’d call the forgiving sort.

“Fancy yourself as Oberon’s jester?” She had the sort of voice that gives you the chills from twenty paces. “Well, jest away. I’d like to see you make eyes at him out of this head.”

So, you’ve guessed it. Who ended up with the donkey’s head? I couldn’t go home looking like that, so I’ve had to stay at the Fairy Court, which is the most frustrating place on earth. I see Oberon every day and he finds me twice as hilarious now, but he’s hardly going to fancy me like this, is he? Titania rubs it in at every opportunity. And everyone – I mean everyone – thinks I’m a boy.

Which is why I decided to take it out on the mortals. But that’s a different story.

Elizabeth Hopkinson is a prolific short story writer and author of historical fantasy novel Silver Hands. She had won several prizes for short fiction, including the James White Award and Jane Austen Short Story Award (finalist). Elizabeth lives in West Yorkshire, UK, where she enjoys playing the piano and flute, crafts, the local community, arts events and nature. She always knew this story existed after seeing a girl Puck in a school play.

WHY WE CHOSE TO PUBLISH “FOR SHE’S A JOLLY GOODFELLOW”:

Stories where a writer “sets the record straight” are usually interesting or fun or both. Elizabeth Hopkinson chose to tell the real story (and backstory) of Puck from A Midsummer Night’s Dream. Great stories often begin with a real life experience or an observation combined with a “what if.” We especially like how she wove other bits of Shakespeare into the mix. And voilà: we have exactly the out-of-the-box kind of story we like to publish.