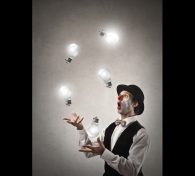 Gary the Great, as he’s styled himself, always wears a tuxedo. It’s a single size too big, unbuttoned, and complemented by a casually draped loose bow tie. The outfit makes him look like he’s spent the previous evening partying with George Clooney. Stylishly shaggy black hair hangs in his handsome face, a cigarette dangles from his Mick Jagger lips. The nonchalance of it all makes his juggling act even more impressive. And infuriates the competition.

Gary starts with three or four balls. Then five, six, seven… It’s whispered he once reached two dozen, but none of the other performers believes it. They believe the knives. They’ve witnessed those, and you can be damn sure they checked to see if they were real. Same with the broken bottles, the chainsaws, the flaming torches, and the flaming chainsaws.

Gary the Great, in short, is a juggling genius. This much is true.

What is also true, is that there exists an agreement among city street performers: you give each other space. To jugglers, this is especially important. To extreme jugglers, extremely important.

If only Gary would remember that, today.

It’s a bright summer morning like no other. The weather is fine and the central square is as busy as it can be. A crowd forms around Gary the Great as he calls them to attention. Tourists, mostly, mixed in with locals who can’t get enough.

This is the day. Today he’ll show everyone he deserves to be juggling on famous stages, before adoring masses of fans. Not on street corners and in squares. It’s been months, and still, no one has properly appreciated his skill by taking him on as a client or offering him a Netflix special. His social media posts receive an embarrassingly low number of likes.

Gary begins as he always does, with a one-handed juggle and a welcoming wave. He quickly adds more and more balls, then moves on to dangerous fare. No time to waste on the small stuff.

Trying to keep the boredom off his face, he picks up knives, bottles, chainsaws. Of course, his boredom is shared by no one in his audience. They look on in amazement, even the ones who have seen him do this before. Gary finds he despises them. How easily amused they were by those first simple tricks. How little they appreciate the true skill involved in what he’s doing now. They do not deserve his genius.

But he’ll give it to them.

Acting on an impulse that feels like a physical push, Gary moves his feet. Carefully, without missing a single catch, he walks in a small circle. Once more, twice. Once he’s confident, he adds a spinning motion. A smile appears on his straight face. He’s beginning to sweat. Excited, he increases the size of the circle. His audience withdraws along with it.

Gary starts to steal audience members from his fellow performers. His audience consumes that of Magnificent Morton, as Gary gets dangerously close to his colleague, who is juggling live animals. He stumbles into Morton and his three unhappy felines join the flaming chainsaws. The same happens with Jugglin’ Jemima. Gary incorporates her five dinner plates into his juggle. His tongue pushes the cigarette from his lips as he concentrates on keeping everything in the air.

A group of annoyed performers, including Morton and Jemima, as well as Ronald (Darth Vader costume), Wesley (living statue), Berty the Clown, and buskers Peter and Julia, carefully approach Gary and ask him what he thinks he’s doing and would he please stop before someone gets hurt.

Berty’s unicycle is ripped from his hand and now Gary rides it, whirling like a dervish, faster and faster, in an ever-growing circle, juggling cats, saws, plates, and six street performers.

Sweat pours from his forehead. He’s doing it. He’s gone farther than ever before. His skill amazes even himself. If only he’d set up his phone to record this. No matter. He’ll be on camera soon enough, surely.

It is, in some way, the best show ever put on. By anyone. Ever. The audience, however, is no longer enjoying it. They realize something is going horribly wrong. The buildings around the square block their slow, steady retreat. They have nowhere to run as hurricane Gary bears down upon them. It catches them, they are lifted in the air, and now all they know is the constant catch and throw. Their collective screams create a hellish cacophony.

As his drawing power increases, he stops his circling and focuses on the spin. Faster and faster he turns, and he and everything he’s juggling becomes a giant blur. As does his mind. His brain, battered by g-forces, loses the ability to think a coherent thought. All that is left is instinct.

To his credit, Gary never drops a single thing. Not when all of the audience is flying around him. Not when he sucks up all the bricks of all the buildings of the city, every single object outside and in, every man, woman, child, animal, and plant. Even as his speed and weight cause him to form what is essentially a massive drill. A drill that digs itself into the earth, deeper and deeper. It’s witnessed from the air by people in planes and helicopters, alarms blaring as the aircraft struggle against Gary’s gravitational pull. It’s seen by the inhabitants of nearby towns, who grip the nearest anchored objects and pray. Further away, no one knows what it is, but everyone fears it.

Like a spider down a plughole, Gary disappears below the Earth’s crust. After some time, the noise grows quieter. And is heard no more.

A giant hole is all that remains.

People come. Scientists, conspiracy nuts, and TV crews from all over the world. Gary finally makes it to prime time.

Days later, NASA reports strange irregularities in the orbits of the solar system’s planets. Odd as the comparison may seem, experts say it’s almost as if someone is trying to juggle them.

Chris Kok is an enigma, wrapped in a contradiction, stuffed inside an éclair. He teaches songwriting but prefers to write fiction, himself. He is Dutch but writes mainly in English. Chris lives in Amsterdam, The Netherlands with his wife, their newly acquired puppy, and two suddenly grumpy cats.

WHY WE CHOSE TO PUBLISH “Gary the Great”:

We receive quite a few short pieces each month, and many of them are good pieces. But what we look for is exactly what this one delivers: a strong, different, memorable, and complete story. And by complete we mean one with a beginning, middle, end, conflict, and resolution—a piece that actually tells a story and is more than a reflection or essay on some topic. Too many of our short submissions fail in one of more of those areas. Chris Kok’s piece succeeds, and that’s why we chose it.

4 comments on “GARY THE GREAT by Chris Kok”