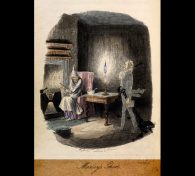 “I’ll be having none of that!” Bartholomew Grundy said to the ghastly apparition lingering over his bedpost. Even though being so very rudely roused from an otherwise pleasant slumber – even though clothed in striped sleep attire – Bartholomew Grundy maintained the air of a stately fellow: with hounded eyes, a hawkish beak, and the balls of his cheeks pink and pearled and propped atop an ever-present and most mousing of smiles. He hooted when he spoke, and clacked his heels when he hopped to poke the air. And he absolutely positively was not, is not, has not, and whosenot – nor would he ever be – victim to a haunt. “None of that, you see!” He shook a fist.

The apparition faded while Mister Grundy refastened his sleep hat, which had undoubtedly become undone in exclamation. In the morning, he would take this matter to the street. He harrumphed and went back to bed.

“Men and women of Hope, I wish to cast a proposition.” Mister Grundy gripped the edges of a worn podium in a clammy, arthritic vice.

“Cast a spell more like. I’d rather you kept it to yourself.” “That’s right then. Here’s wishing you kept whatever it is you’re about rightly to yourself.” “We hardly need more of your sidewinding tongue, Bartholomew Grundy. We’ve had about enough of you rousing the folk.”

“I rouse the folk only when those insidious folk rouse at me!”

“There it is again. Talking backward and forward. It’s too early the morn for a riddle.”

“I haven’t a wink!” He rapped the slate and clucked at a crowd of bobbing brown and grumbling gray coats.

“You mean the–” a brown coat bobbed.

“They’re good-for-nothing bumps in the night!”

“Dare you call my Gam-Gam a bump in the night!”

“I dare and I will! Kept me till dawn with her boogie-woogies.”

“Have you tried hearing her out?”

“Of course not. That’s preposterous.”

“To see why it is she’s so restless and all. It is usually the disgruntled gh-gh… spirits that linger about, waiting for a warm-blooded philanthropist to set them straight.”

“Philanthropize a see-through? One squatting in my own bedroom, no less. Hasn’t even the decency to take the attic, like a respectable wraith. Seen nor heard, s’what I say they ought to be about.”

“They don’t bother no one.”

“Bothers me! And I will no longer stand for it.”

“Bothers you how? It’s just a scare. You wouldn’t be turning yellow now would you, Mister Grundy?” Coats guffawed.

Mister Grundy snarled. “Bothers me from a decent sleep, that’s for one! I haven’t a wink!”

“Earmuffs? In my own home, earmuffs? Earmuffs he says. And one of those ghouls is jamming up my doors.”

“Now why would anyone go and do a thing like that?”

“Aha! That is the question. Yet my knobs won’t budge!”

“Have a piss, why don’t you? All the while, the lot of them, they’ve run the village over. Why, just this morning, despite my forewarning on today’s onabouts and my due recompense – I spoke it plain – an unsightly peek-a-boo tried to run me from my own wash closet. And this one was particularly mangled. Brushing my teeth no less, and this… this… thing minds himself knowable and only in the odd angles of my shaving mirror. A deviant! And another, with her face pressed into the curtain, listening to me bathe – the virago! And it’s not in my home alone, lest you all go about that route. They’ve left no stone unturned. All day long, everywhere I go, it’s ‘boo’ this and ‘boo’ that. Can’t take a tram without watching some sorry blue-skin dive in front of the cart all hours on end; can’t take a cab without the same. Gruesome! Gruesome, I say you. And I will no longer stand for it!” He clenched the podium, waiting for a response that never came. Wood groaned between his grip and coats shuffled, but the mood was otherwise nondisrupt. “Name one good thing these ghosts do for this place, let alone sitting like lumps and booing?”

“They keep the bugs away.”

“That can’t be proved!” Mister Grundy flicked a finger to put some air into his point, but he had lost them; brown and gray coats swayed in file, exiting town square. “Very well then. If no one will cast vote, then I have no choice but to take the matter to law!”

Mister Grundy swirled his face and spat. He clacked his heels and bucked his knees and made on to the courts.

When Mister Grundy arrived home that evening, not in a huff, but rather a trifle, a decidedly possessed door knocker grinned and made the mind to give the uninvited a jolly fright. He pursed his grin as Mister Grundy – seeming in a particularly delightful aura – floated to the door, jiggling a key and ring.

The knocker rattled and shrank back from the outburst, dispirited.

“Here we are now. I didn’t wish it to come to this, and let you be the first to hear: Ghosts are no longer welcome!” Grundy pinched a nail and tongued his cheek. He rapped the head with a hammer, driving it into the door above an uncharacteristic and perfectly lifeless knocker and pinning a writ.

It read as follows:

NOTICE TO EXORCISE TENANCY. ANY AND ALL, ALL AND ANY APPARITIONS, PEEK-A-BOOS, BOGEY-PERSONS, BUMPS IN THE NIGHT, PHANTOMS SPECTERS AND WRAITHS, UNWELCOME SHADES AND FADES, UNWANTED COLD SPOTS AND CHILLS OF THE SPINE, WANTON CLICKS AND CRICKS (ATTIC, BASEMENT, OR OTHERWISE), AND ALL AND ANY – ANY AND ALL UNWONTED AIRS – OCCUPYING THE PROPERTY LOCATED AT 17 CHERRY BOWL LANE ARE HEREBY REQUIRED TO VACATE AND SURRENDER POSSESSION OF THE PREMISES AND REMAIN SO HENCEFORTH AS PER THE DEMAND OF THE LANDLORD: BARTHOLOMEW WILFRED GRUNDY.

Mister Grundy planted his fists into his hips and nodded at a job well done.

He washed his hands of the matter and was pleased to find the door turned without a single grunt, budge, crick-creak, or groan. That night, he slept like a babe – while other, more astral tenants huddled and plotted deviously.

Mister Grundy roused, feeling lighter than air. Considerably lighter, as it were. In fact, he felt as if he’d been halved, quartered, and given the runt’s share. Though unshapely, and most noticeably a transparent blue, Mister Grundy maintained a proper manner about him. His eyes gave but the smallest hint of shock when he gazed the bed from his intangible perch below the ceiling. A murderous gray coat fled at a shuffle – grumbling something of his Gam-Gam leaving a grisly scene behind him. In an inky pool, the earthly form of Bartholomew Grundy lay, a shriek, with a face taking the form of horror atop a body riddled with punctures leaking onto and seeping into an otherwise divine mattress. While the bottom side of Mister Grundy lay submerged, the white stripes of the business end to his stately sleep attire had merely pinked.

A ghastly apparition appeared beside Grundy. It hovered and took the form of a frump.

“You are among the dead now, Bartholomew Grundy. Now, grow up!”

Bartholomew Grundy clacked his feet and poked the air and thought up another brilliant insult to jab.

D. Angelone once stuck a peanut up his nose. Not one of the small bits that come in a can. A whole, fully shelled peanut.

WHY WE CHOSE TO PUBLISH “Ghost Town”

We always appreciate humor, and ghostly humor… even better. Author D. Angelone has given us an imaginative, delightful piece with wonderful dialog. In some ways, the voice and characters reminded us of Dickens’ A Christmas Carol, hence the picture we chose for it.