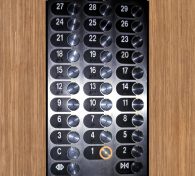 (“Going Down” was previously published in The Cynic Online in 2011. The magazine is now closed.)

33… 32… 31. The red digital display above the double doors of the only elevator heading to the ground floor is counting down.

30… 30… 30. Damn! It’s stopped to take on riders. It’s Friday afternoon and I am anxious to get the weekend started, but the elevator car is going to stop at every friggin’ floor and be so crowded by the time it gets to my floor. And it’s going to be the same old empty apology and excuse, “Sorry. No more room,” spoken by some smug bastard that is sharing space with more smug bastards. Life is good when you’re a smug bastard. At least you’re going somewhere.

29… 29… 29. Dammit! More people are getting on and now there’s someone waiting with me. I tried to quit work a few minutes early to avoid riding down with the lady who overloads on a perfume that, I swear, smells just like bug spray. But there she is, standing next to me. No way can I hold my breath all the way to the bottom. Maybe it would be better to stand right next to her, breathe deep, and pass out, just to get it over with.

25… 25… 25… 25… 25… 25. No! What the hell is holding this thing up? It could be anything. Floor 25 is where these corporate executives of a sports clothing company work. Who knows, maybe they’re hosting a meet-and-greet with the United States Sumo Wrestling Team to discuss a new line of clothing or something. Maybe the entire team is going out to dinner and they are all trying to cram into the same car.

20… 20… 20. Son of a bitch! Stupid horse threw a shoe in the back stretch. Floor 20 is where the guy works that jogs every day at lunch but never showers after. There is no escaping his B.O. I think the rest of the building wouldn’t mind pitching in to give him his own private elevator car to ride in.

19… 18… 18… 18. There is a doctor on this floor who is a specialist in fixing deviated septums. He is apparently a wizard in the world of septoplasty. It’s easy to tell who is coming and going from that floor by the nasally breathing. One time the doctor had a family emergency and had to suddenly leave. All his patients in the waiting room left at the same time. I somehow managed to ride with them. It was like listening to perverts honing their obscene-phone-call breathing skills.

17… 16… 15… 14. Ding! Wahoo! After a short delay, the brass double doors slide open with a gentle rumble. I am face-to-face with all the riders. I can tell that some of them are annoyed that I stopped their car.

Some of the riders I recognize by their faces, some by their smells, and some not at all. Gurgling out from the broken elevator speaker is an instrumental version of “The Girl from Ipanema,” which is just wrapping up.

I wait for a moment, but no one wants off. I approach the car and begin my 180-degree rotation so I will be facing forward for the ride down. At the same time, the riders begin mentally calculating the floor space that Ms. Bug Spray and I will occupy, and they do a little shift to allow us just enough room so no one will have to make physical contact with anyone else. Forced to stand between Ms. Bug Spray and Mr. Jogger, I am experiencing the outer regions of olfactory meltdown.

There is a guy who works a few floors below us who has a habit of not turning around if the elevator is crowded and he is forced to stand near the doors. He just looks at everyone as they try to avoid eye contact with him. Needless to say, he makes some of the riders feel a little uncomfortable.

11… 10… 9. We are starting to move and I can sense the hopes of everyone that there will be no more stops. The anticipation is becoming palpable.

8… 7… 6. The excitement is growing and my palms begin to sweat. There are frenzied butterflies rioting in my stomach. Each floor we pass causes a level of giddiness that is exceeded only by passing the next floor. The prospect of making it all the way to the bottom without stopping is positively intoxicating.

5… 4… 3. We are passing floors as though in a free fall. My knees are becoming weak. I begin to lean on Ms. Bug Spray and take in her L’eau de la Mort de Bogues. In my euphoria, her scent now reminds me of lilacs in spring. The entire car is on the verge of holding hands and singing a chorus of “Kumbayah.”

2… 2… 2. Are you kidding me? Nobody rides from the second to the first floor at rush hour! Nobody.

The moment the car begins to brake, there is a murmur from the riders, grumbling at the thought of being so close to a destination, so close to the end of the ride, so close to reaching the promised land, only to have the dream crushed by an idiot who has no concept of finite space in the physical world. Kenny G is gurgling from the speaker as the car slows, and then stops.

So, what kind of a moron even considers the remotest possibility that there will be room on an elevator that has just traveled thirty-plus floors? Oh yeah, that’s right. Floor 2 is where the attorney, William LaMode, has his office. His in-your-face TV commercials are on at all hours, and most people swear they are way louder after midnight. He and his minions occupy the entire floor. You know when they’re in the elevator with you because they like to loudly discuss their pending cases, hoping to impress. They are all incredibly obnoxious shysters.

LaMode made it big because he happened to be in the right place at the right time and sued the pants off an unstable, pilled-up, movie star who ran over an indigent man in a seedy part of town. The movie star settled and the indigent man got rich. So did William LaMode. He has a catchy slogan to remember him by: “Hurt on the job? Hurt on the road? Give me a call. I’m William LaMode.” The world would be a better place if he would just admit that he’s nothing more than a greasy ambulance chaser. It is what it is.

The doors rumble open and standing in front of us is Mr. LaMode himself. It figures.

All of us, the smelly, the heavy breathers, the facing backward, the corporate executives, we who were once strangers, are now the Brothers and Sisters of the Descension. We are bonded in kinship by our journey together. We watch William LaMode as he takes his first steps forward. But we stand as unyielding as Gibraltar, and with our best smug-bastard look, all say as one, “Sorry. No more room.”

I hit the “door close” button and away we go. Smirking. Giggling. Laughing. Down one last floor, one last red digit, down and away from here, to our wives and husbands, our children, our families, our homes, our hobbies. We revel in our united victory over a common foe.

Jon Beight lives and works in Western New York. His fiction and photography can be found in Boston Accent Lit, The Journal of Compressed Creative Arts, Story Shack Magazine, Foliate Oak, and other fine publications.

WHY WE CHOSE TO PUBLISH “Going Down”

Everyone who works in a multi-office, multi-story building and has to deal with the elevators and the building’s occupants, particularly at the end of the day, will appreciate author Jon Beight’s all-too-accurate and humorous take on the experience—as did we. This is how you turn an everyday experience into a delightful and memorable story.