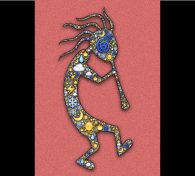 The cat’s solitary orange eye stared at Indian Wayne, who sat carving a wooden figurine of Kokopelli, the quirky Navajo spirit of good fortune. Outside, the sun was a timid swimmer lowering itself into the ocean.

Wayne used an old, razor-sharp Navajo boot knife to retouch the carving. He enjoyed the smooth feel of the yellow elk horn handle as he wielded the blade. Squinting, he rubbed the carving with sandpaper. Soon, he would paint it and sell it to the tourist shop on Main Street. Kokopelli was popular with tourists.

Wayne rubbed his nose. The unemployed Navajo eked out a meager living carving. The downtown merchants bought the art for pennies on the dollar and resold it at a huge profit. He spat. The wealthy tourists wouldn’t buy directly from the Navajos. Wayne knew they thought the rusty-skinned natives were thieves.

He kept working and sighed. One day he hoped to save enough to afford a cataract operation.

A bulky, UPS package stood unopened on the floor. Every year, his smart grandson sent Wayne a new-fangled device. Wayne traded these useless toys for a little extra cash. Of course, he would never tell his grandson. He smiled again, rubbing his nose. Outside, a chill pervaded the desert air.

The cat whined and padded over to the carton. She pawed it and began gnawing on the cardboard; soon, it began to tear. She had very sharp teeth that were quite handy for biting the heads off field mice.

Indian Wayne whistled at the cat to warn it away from the carton. The animal had wandered in one day and made itself at home. Some said it was an evil omen. Indian Wayne cocked his head. He believed it was a sign from Kokopelli. Its single eye glowed, as if Kokopelli’s spirit animated it and peered out at the universe.

Wayne grimaced and massaged his left hand. A week ago he was removing a burr from the cat’s coat when it yowled, then latched onto his left thumb; it wouldn’t let go. In pain, he had rushed to the reservation ER. The doctors had to amputate part of his thumb to remove the cat.

The old Navajo sucked the stub. In hindsight, Wayne knew the injury was a stroke of luck. It forced him to carve with extraordinary care. His carvings were better than ever. And, afterwards, he sold more figurines. Grinning, Indian Wayne blew hard into a hanky. Yes, the cat was good luck.

Abruptly, there was a harsh, scraping noise. Wiping his nose against his wrist, Indian Wayne set down the carving. The cat had raked a broken section of the carton savagely with its claws. It had penetrated to the mechanism underneath. Rising to his feet, the old Indian shooed off the feline, who hissed furiously then vaulted on top of a nearby shelf and stared at him. Wayne shook his head. The cat’s solitary eye was a fragment of the sun.

Breathing hard, Indian Wayne pried open the package with his knife. It contained two rectangular devices. There was a note inside.

“Happy Birthday Gramps: Enclosed is the latest scanner and a 3-D printer. Now you can make copies of your carvings and make lots of money. Love, Peter”

Hmmph. Indian Wayne wrinkled his nose. How could you print a carving? Still, he was curious. He connected the scanner to the metal box, labeled, “3-D Printer.” Then he plugged the power cord into a socket. A green light flashed. Indian Wayne placed the figurine of Kokopelli into the scanner. With a whirr, the printer door popped open; out came an exact duplicate.

Indian Wayne examined the two closely. He squeezed his nose and grunted. He couldn’t tell the difference. This was magic worthy of Kokopelli himself. He stared at the cat and grinned.

Later that afternoon, Indian Wayne went into town and sold eight copies of the Kokopelli carvings. The storekeeper gave him an odd look and inspected them carefully. “Did you steal these,” he demanded. Wayne shook his head. Grumbling, the man paid Wayne for all eight carvings. Wayne chuckled. He was lucky indeed.

Once home, Indian Wayne took out a large, cylindrical block of red cedar he had been saved for a special occasion. He paced around the block several times, viewing it from different angles. Then, he began chipping away at the solid wood with his boot knife. The knife was very sharp, but it was tiring, tedious work. Soon, he wiped sweat from his face, panting from the effort.

The cat leaped into his lap, yowling. The blade slipped. There was a sick, crunching noise. Indian Wayne had chopped off his left arm at the elbow. Screaming in pain, he passed out.

Indian Wayne awoke to a soft, sucking, gurgling noise. The cat was chomping and lapping up the pulpy remains of Wayne’s left arm. The old Indian froze. Then he began to sob. He knew he couldn’t carve anymore. Tears dripped down his cheeks. The drops were cold as stale soup. They formed a dark pool on the floor that diluted the red blood from Wayne’s stump. He cried out. Maybe it would grow so deep he could drown himself in it.

Then, he glanced up at the scanner. Rushing to the device, Wayne stuck his right forearm completely into it and turned it on. The machine whirred; out popped an identical copy. The duplicate arm was warm and pink. Quickly, Wayne took a needle and sewed it onto the stub of his other arm. The cat stared and licked its chops.

Indian Wayne drew a breath. He flexed the arm. It worked perfectly. Whistling a Navajo tune, Wayne began carving. Now, he had two right hands and two good thumbs. The corners of his mouth curved upwards. Once again, Kokopelli had brought him good luck.

Wayne glanced up as the cat padded closer to him. Its single eye glowed. Yawning, it smacked its lips.

WHY WE CHOSE TO PUBLISH “Handiwork”:

We loved this tight, imaginative piece from author Jan Cronos that blends several unexpected elements with an interesting character. And the cat adds the perfect touch!