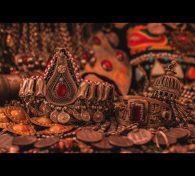 The director of the British Museum felt about as old and lost as the relics under his care. He entered his office, triggered the fireproof lock, and took off his jacket to stretch out his scaly wings.

Not only old and lost, he felt naive and insecure. He always felt this way when his parents were visiting. They’d been threatening to ever since Grandad perished in Peru (at the ripe old age of 2,166).

He’d sent a helicopter to collect them. He felt sure his father would have something to say about that.

As it turned out, what his father had to say about it was: “Felt like sardines up there. Ashamed to let your old man fly as nature intended?”

“Rubbish. They’d say it was special effects. I do it all the time.”

They were on the roof of the Museum after hours. As the helicopter left, its underside blazed like a mobile moon, so bright was the city at night.

They explored the empty halls, beginning with the Sutton Hoo Ship Burial and circling down to the Parthenon sculptures. “So this is your hoard,” said his mother. “It’s nice, dear.”

“Thanks. This is an Aztec death mask,” the director pointed out with nervous pride. “It was placed at the head of the tomb of Ahuitzotl and salvaged by conquistadors.”

His father eyed it blankly. “Gold, is it?”

“Not gold. The Mexica didn’t value gold too highly, they had so much of it. But it was symbolically priceless. Now it’s mine.” the director added with aplomb.

“Hrr,” his father sniffed. “So where’s the gold?” A few flames leaked from his nostrils.

“This is all treasure, Dad. The largest hoard of ancient treasure in the modern world, and it’s not even hidden.”

“Oh, is that all?” His father came to a halt by a relief of Assyrians hunting lions. “I know you think I’m old-fashioned, but why does your generation feel the need to make everything public? Time was, you didn’t make a song and dance, inviting every ape in the world to snoop around. You made your hoard and slept on it. How do you get a decent century’s rest with apes poking around all the time?”

The director’s mother laid a clawed hand on her son’s shoulder. “Your father and I think it’s time you came home.”

His father nodded, adding, “There’s a lovely dragoness in the Alps whose mother says she’s looking to settle down.”

“Dad!” The director’s snout reddened. “I’m fine. You’re not grasping what I’ve built these last 300 years. Not even Grandad had a hoard like this.”

His father let his exasperation show. “Think about the future. You can’t grow a hoard under all this attention.”

“That’s the best bit,” the director argued. “People bring me treasures because I’m the very best at looking after them.”

“Hrr. Don’t they ever want them back?”

“Yes, but get this: Many items actually lose value if they go back. And if they insist, we have world-class lawyers and diplomats to undermine the claim. It’s ingenious. A self-sustaining hoard that grows itself!”

His father squinted. “Doesn’t sound like something you can sit on.”

They had arrived back on the roof. His parents had chosen to extend their trip by flying to Wales to hunt a few sheep. The director had convinced them to take a helicopter as far as Cardiff, at least.

But now a different helicopter was making its descent, an enormous crate swaying underneath.

The director blanched. “Let’s go back inside, I never showed you those sarcophagi,” he appealed desperately.

Too late. The crate had landed. “We got it, sir!” one of the crew shouted. “Mind if we check for damage before taking it inside?”

Another crewman levered off the lid. The director’s parents peered in. Reluctantly, the director did too.

“Incan ‘dragon’ bones!” the pilot informed them heartily. “Must be 2000 years old at least.”

The director’s mother covered her mouth, her human guise flickering from shock.

“That’s it, my boy,” his father roared. “You’re coming home with us. Don’t you know heritage matters?”

Matt Ingoldby was born in Bangor, Wales, and lives in London, trading a sea breeze for city smog. He is not as well-travelled as his stories, which have been published in four continents but plans to catch up before the next pandemic hits. He works as a website manager for a UK charity.

WHY WE CHOSE TO PUBLISH “Heritage Matters”:

We love pieces that push the limits of a familiar premise (like dragons sitting on their hoards of treasure, in this case) into the modern world in a way that’s almost believable. Author Matt Ingoldby delivered this charming “what if” piece that we couldn’t resist. There’s no deep message here, just a delightful, clever, and complete story with all the elements of good fiction in under 700 words. And we say, well done!

THE ORACLE AND THE HEIST by Tarver Nova

A ROBOT ON A NUDE BEACH by Franco Amati