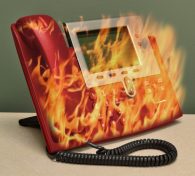 Lou liked seeing the blinking lights on his desk telephone. It meant people needed his help. He pressed one of the flashing buttons. “Suicide Hotline,” he said into his headset.

It was a woman. “I… I’m very upset. I want to kill myself,” she stammered through many tears.

“My boyfriend’s been cheating on me with someone at his office,” the caller explained. “I just found out!”

“I’ve given him the best years of my life, and he treats me like this. I… I just want to kill myself.”

“Then that’s what you should do,” Lou told her.

The woman was confused. “What?” she asked.

“I agree with you. You should kill yourself,” Lou said.

“I don’t… I thought this was the Suicide Hotline.”

“Are you chickening out on me?” Lou asked.

“A little tip: If you fill your tub with warm water, get in, and slice your wrists, it’s a very peaceful way to go—almost like falling asleep.”

“Is it?” the distraught caller asked.

“Trust me,” Lou concluded. He pushed a button to hang up on the woman and then took another call. “Hello. Suicide Hotline.”

“I learned today that my wife has a boyfriend on the side. She’s been seeing him for years.”

“She’s been playing me for a fool,” the man continued. “I… I just want this whole mess to end. I should kill myself.”

“Certainly not,” Lou continued. “Remember the old saying: ‘Don’t get mad, get even?’”

“Can you get your hands on one?” Lou inquired.

“Kill them both,” Lou answered matter-of-factly.

“Sure. You said yourself that your wife’s been playing you for a fool,” Lou said.

“Are you gonna let her and her boy toy get away with this? Man up!”

“If you’re careful,” Lou went on, “no one will ever suspect you.”

The caller was now certain of himself. “I can pull this off,” he said. “They should die for what they’ve done to me.”

“Does your wife have… life insurance?”

“Good point,” the man continued with sudden realization. “I’d be in like Flynn! Thanks for the advice.”

Lou heard the approaching footsteps as he disconnected the call and cradled the phone. It was Mr. Linville, his balding, always-worried boss. “How’s your first week going?” he asked, stopping at the entry to Lou’s cubicle.

“You’re steering these poor souls in the right direction?”

“I certainly am,” Lou answered.

“I can’t thank you enough for starting so quickly,” the boss went on. “When Jimmy died in that skiing accident, I thought our callers would be up a creek without a paddle during his graveyard shift. This isn’t an easy slot to fill.”

“Will do,” Lou assured his departing boss. A call had come in. “Hello. Suicide Hotline.”

It was another woman. “My… My mother just died, and I don’t know if I can go on,” she choked out. “I loved her so much.”

“Are you thinking of killing yourself?”

She sniffed and answered in the positive; then her mind veered. “You have a very soothing voice,” she said.

“Louis, but everyone calls me Lou.”

“That’s a lovely accent,” the woman added, “but I can’t place it. What’s your last name?”

“I’ve heard that name before… somewhere.”

“That’s not important,” Lou assured her, a smile growing on his face. “Let’s get back to your… suicide.”

His prose work has appeared in several magazines and anthologies. In 2015, his script “The Candy Man” was produced as a short film under the title DARK CHOCOLATE. In 2013, he won the inaugural Marion Thauer Brown Audio Drama Scriptwriting Competition.

WHY WE CHOSE TO PUBLISH “Hotline”:

This is not author Mike Murphy’s first appearance in Fabula Argentea, and it won’t be the last. Mike does a great job of delivering stories with twist endings while at the same time giving us a good story leading up to that ending. We’ve read some authors’ pieces that would otherwise be bland without the “surprise” ending.

“Hotline” aptly demonstrates that it’s possible to tell a complete, enjoyable, and excellent story in under a thousand words.

2 comments on “HOTLINE by Mike Murphy”