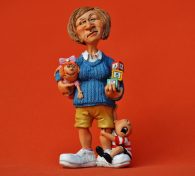 First, write off the idea of ever starting a family of your own. After a day or two of cleaning poop out of the bathtub and vomit off the living room carpet, the very thought of children will make you shudder. Accept the fact that you will neither sleep again, nor will you understand the concept of “going out with friends.” No more coffee dates. No more midnight movie premiers. No more spontaneous drives into the city when you need some retail therapy. Actually, you should probably forget about friends altogether.

What should occupy your thoughts is what you will feed the kids for dinner (probably mac ’n cheese and chicken nuggets as usual), who has what practice on what day this week (swim is Tuesday, Thursday, and Friday. Or maybe that is gymnastics… or maybe soccer…), and which uniforms need washing first. (Oh, and don’t wash a red dance leotard with white football pants. Apparently, Coach doesn’t approve of his players wearing pink.)

The next thing you need to do is memorize the schedule. Life’s easier when you know what to expect. Every school day should start at 5 a.m. with you fixing lunches (but don’t forget Ella can’t have peanut butter or she will literally swell up and die; after his turkey hunting incident Zach will only eat ham; and make sure you ALWAYS cut off the crusts).

When the lunches are made, they go in backpacks, along with last night’s homework. Oh, and never forget to sign their daily planner. When they say that they read for thirty minutes last night before they turned on the Xbox, pretend that you believe them and sign away.

Before they wake up, make sure you set out a clean outfit for the day. This includes underwear (the boys will never change their underwear if you leave it up to them). Don’t get upset when Charlotte comes out in something completely different and probably all black. While the clothing will match her lips, it will be a stark contrast to her pale skin and recently bleached hair. This is merely a phase according to her parents. When 6 a.m. rolls around and it is time to wake them up, give them no choice but to get up the first time you ask. Turn on every light in the house, let light flood in from every window, leave their doors open, and turn Disney Junior all the way up. Then they will have no other option but to crawl out of bed, even if it is just to close the blinds and doors so they can go back to sleep. Either way, they are up and now you can feel confident that sometime within the next hour they will be awake and dressed.

After you get them moving, start on breakfast (and don’t go out of your way to be quiet). Make pancakes, eggs, fry up some bacon, and get out the orange juice. Have it all sitting out on the table and ready to go when they drag themselves out of their bedrooms (and don’t worry, they will come out eventually). Try not to be frustrated when they grab a granola bar and head out the door instead of sitting down to eat.

Make sure they are outside at the end of the driveway no later than 7:05 a.m. so they don’t miss the bus. Again. But make sure they aren’t actually in the road. Otherwise, the school will call you and explain why they have a policy against preteen boys playing chicken with school buses. Once they are gone and you finally have a moment to yourself, don’t sit down. As soon as you start to relax, the little ones will wake up. With two of them at the ages of two and three, potty-training will still be a daily struggle. This means that there is probably at least one bed in the house that will need the Doc McStuffins sheets to be changed.

After you take care of the beds, make sure the kids are clothed. Jack has a knack for stripping off his clothes and wandering the house naked. People always talk about his cute, round cheeks, but I really don’t think those are the ones they expect to see. Most likely, they will spend the day in a Mickey Mouse pull-up and a superhero cape or a Cinderella dress and heels that are too big. Sometime before lunch they will call you to come sit on the couch and watch their show with them. They will sing and dance along and you have to pretend that listening to “The Little Einsteins” for the 713th time doesn’t make you want to die. Eventually, they will want to go outside, so you must prepare yourself for at least one of them to end up crying and bleeding. They will trip while chasing butterflies. They will face-plant off the swings. Riding bikes never seems to go well either. Sometimes, “Walk it off!” works really well. Other times it takes a good cry and a snuggle before Sophie realizes that a scraped knee doesn’t mean that she can’t be a princess anymore.

Hopefully, soon after lunch they will hit their wall and fall to the ground out of exhaustion. Then comes the most precious time of the day: nap time. Chances are they will sleep for a little over an hour, except for Noah. He hasn’t napped in two years. This is mainly due to the fact that he is an eighty-year-old man in a four-year-old’s body and he “don’t need no nap!” However, he will sit quietly and watch a movie (probably Despicable Me, yet again) while he waits for his partners in crime to wake up. This usually happens at 3:46 p.m. when the older kids burst through the front door after a long day at school, and then immediately lock themselves in their bedrooms.

The evenings are usually the calmest part of the day. After dinner, the older kids head to their rooms to do their homework (supposedly), and the younger kids will inform you that they are retiring to the playroom to play “Harry Potter” and from now on wish to be addressed as their character counterparts (usually known as Harry, the girl, and the orange boy). When it is time for bed, make sure the little ones are bathed and asleep by 8 p.m., which, if you are lucky, will actually happen. After they are all tucked in, clean up the kitchen and the playroom, readying them once more for destruction. Then go to each of the older kids, telling Zach to turn off the video games, Ella to put the book away, and telling them both “Don’t forget to brush your teeth!”

It isn’t until you reach Charlotte’s room that you will hear the stifled sobs. Open the door and see her lying on her bed, face buried in a pillow. Approach cautiously and ask why she is crying. Learn that, as it turns out, teenage drama hasn’t changed much since you were her age.

She will tell you a very detailed story, with way too many uses of the word “like,” about how Eli was supposed to ask her to go to the movies this Friday but instead he asked Olivia and “Why would he ask Olivia? She is such a stupid bitch!” Calmly explain to her that (a) she really shouldn’t be using that language, and (b) if Eli is dumb enough to ask Olivia out then he is the one that is stuck with that stupid bitch and they probably deserve each other. A small smile will appear on her face, and she might even try to laugh through the tears. But one thing is certain. She will wrap her arms around your neck and you will simply hold her until her breathing becomes even and the tears have ceased.

In this moment, stop and realize that step one may have perhaps been wrong. The thoughts that once made you shudder will now be met with a fond smile as you think about the memories you have had together. The time Ella brought home arts and crafts with your name scribbled almost illegibly across the top and smiled wide as she presented her handprint turkey to you proudly. The time Sophie and Jack crawled into your bed at 2 a.m. and pressed their icy little fingers into your side. The time Zach tried to make you a birthday dinner and the fire department ended up joining you for takeout. The time you picked Charlotte up from her first day of eighth grade and she introduced you to her friends as her nanny, cutting their laughing short with a death glare so powerful the room practically went cold. The time Noah curled up in your lap and drifted to sleep, but not before whispering almost inaudibly that you were his best friend.

These moments make the shudders worth every second. You will slowly come to realize that maybe having kids of your own is exactly what you want. After all, if you can grow to love someone else’s children that much, just imagine how much you will love your own.

Brittney Deaton is a recent graduate of Central Washington University, where she earned her Bachelor’s Degree in English: Professional and Creative Writing. She lives in Naches, Washington, where she works as a part-time nanny and preschool teacher. She enjoys reading, writing, cooking, and spending time with her family and friends.

WHY WE CHOSE TO PUBLISH “How to Be a Nanny”

We loved the resonance in this story and how at the end the author brought it back to where it started.