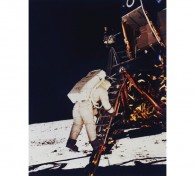 Overhead, the warning lights in the lunar module blink to amber. Their remaining oxygen is measured in minutes.

Buzz Aldrin scans Neil Armstrong’s face for panic, finds nothing. No wonder they picked him to step out first, Buzz thinks. I’ve got sixty-six combat missions, a doctorate in astronautics, and they end up picking Neil because they want a Lindberg type.

One giant leap for mankind. Aldrin winces as he recalls Neil’s words. The bastard aced it.

“It’s all right,” Neil says to Mission Control from inside the module, now stranded on the lunar surface. “The engines are dead. We can’t lift off.” Standing behind him, Aldrin sighs in agreement.

Neil knows Collins can’t see him, but he waves goodbye anyway. Both Neil and Buzz briefly discuss Collins’ reaction to it all—Neil imagines steely resolve from a dime Western, while Buzz imagines Collins’ tears collecting at his eyes in zero-G. Thus ends a career in aviation for Collins that began with boyhood airplanes of balsa wood.

There is, however, no moment when both Neil and Buzz openly say they’ll die on the surface rather than the cramped confines of the lunar module. The moonwalk’s what they came for, isn’t it?

Just a nod or two in agreement, and they’re suiting up for the last time.

“There’s something I want to say,” Aldrin declares.

Without looking at him, Neil fumbles with the Portable Life Support System on his suit, awkward like an oversized backpack.

“I know you heard the stories about how I lobbied to be the first man on the moon,” Aldrin says. “My intentions were misunderstood.”

“When I came into Slayton’s office with the figures and graphs—I was only worried the mission could be jeopardized if you went first rather than the lunar pilot. The commander always goes second. That’s how we did it in training, so why change now? It was concern for the mission. Not personal glory. Maybe Collins mentioned my efforts—you know how people talk!”

In fact, Aldrin knows Collins told Neil about it and said something worse to Buzz’s face.

“Hadn’t thought of it,” Neil says dismissively, brushing away the moon dust that followed them in, covering their instruments and panels.

The oxygen light goes to yellow.

“And then I was worried that you were only chosen because you were a civilian and I’m military,” Buzz stammers. “Someone told me—I can’t remember who—that NASA thought a civilian would send a message of peace, as opposed to a military man. And that’s an insult to the troops. All of them.” He pauses. “It wasn’t about personal glory.”

Silence. Neil snaps the unwieldy gloves of his suit into place, motions for Buzz to do the same.

“I was totally content being second,” Aldrin adds. “It would have been nice being first, I mean… who ever remembers the second man?” He chuckles. “But I was fine with it.”

“I also thought you did a great job with that speech you gave after you stepped out,” Aldrin says over the helmet radios. “I’m not going to lie. I wrote something big when I thought I’d be first, something with Biblical references thrown in, because the hell with those non-believers and their lawsuits. I threw in some Shakespeare and Homer too, I think. I must have practiced for hours on that one.”

“I just made mine up when we landed,” Armstrong says. “You don’t have to say much.”

Buzz grimaces. “Anyhow, I think mine would have worked,” he says through gritted teeth. “But you… you got it right with that ‘one small step for man’ thing.”

Armstrong looks up. “I said ‘small step for a man,” Armstrong says, emphasizing the “a.” “It doesn’t make sense without that word.”

Neil forces the hatch open, and lets Buzz exit first this time. Nine steps down the ladder and they’re on the surface again, drawing small contentment from the fact that they finally mastered the right hops in the Moon’s one-sixth gravity.

“Anything you’d like to say?” Slayton asks from Earth.

Before, they had the air of spontaneity. Now it reminds Buzz of childhood talent shows when an adult put the microphone in front of him. But this time he’s ready.

Buzz offers encouragement with his final words, pleads for the program’s future. He reminds them that dead bodies litter Mount Everest and the Arctic, but those deaths never scared anyone off. It wasn’t about death. He offers support to Apollo 12, scheduled for takeoff two months from now, and to Apollo 13, which would surely make it.

He gives the world the words he thinks they need, the comfort to make sense of tragedy, and the authority to imagine accidental death as a noble sacrifice. He then mutters something under his breath, which scientists will decipher as something resembling the 23rd Psalm. But there on the surface of the moon, he knows he’s blown it. Who’s going to remember what he said when he said far too much?

Buzz turns toward Neil. He knows Neil has two kids waiting for him, and a wife who follows the moon mission from lunar maps in their bedroom. Surely Neil must feel the urge to pontificate to the billions home on Earth, must suffer some desire to comfort those expecting victory.

“It was worth it for the view,” he says.

Aldrin’s last words will again be digitized and revealed as:

NOTE: “If The Moon Landing Had Failed” was previously published in Third Wednesday magazine, a print-only publication out of Michigan.

Jason Peck’s fiction has either been published or is forthcoming in Crack the Spine, Third Wednesday and Smokelong Quarterly. He also serves on the editorial board for After Happy Hour Review, which recently celebrated its second issue.

WHY WE CHOSE TO PUBLISH “If The Moon Landing Had Failed”:

We don’t often see pieces that reimagine some historical event, as this one does, and we must say that author Jason Peck has done it marvelously well. He achieves such believability and convinces us that this is how events likely would have played out had the historic moon landing mission taken this turn.

Add in the touches of human pathos, and you have all the elements of a well-wrought piece of flash fiction that stretches beyond its mere 900+ words.