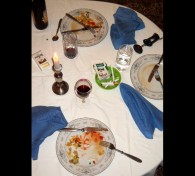 It was pleasant under the patio with the roof extended to shade us from the sun and a trickling fountain on the wall at the northern end. The six of us sat at the places I had laid around the rubber wood dining table. A peach coloured cloth covered it, protection from grubby fingers, slopped food, spilt drinks, and horror of horrors—live cigarette ashes!

An array of colour co-ordinated place mats and serviettes was set out for each person, along with drink mats and rustic wooden cutlery. Two peach candles flickered either side of the floral centrepiece and reflected in the crystal wine glasses.

So, there we all were, neatly dressed, starving hungry, and ticking over quite well from our pre-dinner drinks. The conversation was bubbly, light and a little flighty. Each of us seemed to have a cup full that needed emptying.

The stressful week at work, the latest on the romance scene, new material items to boast, hot gossip, and the doom and gloom of life in the noughties:

‘How’s your son coming on?’ I enquired of Terry as I served the entrée.

‘His pain has almost gone, thanks, Chrissie, but his widdler’s still a bit on the numb side.’

‘But he managed an erection the other day.’ Karen smiled.

‘Obviously on the improve.’ Alex grinned. ‘Pass the pepper, please?’ He even seasons his satay sticks!

‘Garlic bread’s nice. Did you make it?’ asked David, wiping a dribble of butter from his chin. (I hope the grease comes out in the wash.)

‘…And the sign read, “Employment or terrorism,” Jim exclaimed loudly.

He was discussing the job situation with Alex at the far end of the table. So much doom and gloom. Some people just ooze negativeness today.

I glanced over at the orange tree, remembering how Alex and I had seen hillsides of them growing throughout our trip to Spain last year…

‘…Gets elected there’ll be an uprising for sure. It’s estimated that forty per cent of those under thirty five…’

‘That was really nice, Chrissie.’ Karen smiled and we began stacking the plates.

When I returned to the table, my glass had been refilled, and those that smoked were doing so. As I reached for one of Alex’s, I remembered that I had given up on New Year’s Day. Bugger it! I had my own cup that was full to overflowing, and tonight I was allowing myself all the vices I could lay my hands on. Well almost, I thought, catching Terry’s roving eyes on my breasts.

Dave was his usual quiet self. A real English stuffed shirt according to Karen when she had first met him. Some of it still remained. He had just turned thirty and looked it. I had seen more life in forty-year-olds. Still, he was quite sweet in spite of it all. If only he would learn to relax more.

‘More wine, David?’ I filled his glass almost before he had time to think about it. Breathalysers are mandatory unless Australia wants to lose half of its population, but boy did they put the damper on merrymaking.

Karen had manoeuvred the conversation around to work. She and Alex worked in the same Unit. It was top heavy with males, and Karen was wallowing in it—as usual. Wherever she went, the centre of attention had to accompany her–and it usually did.

I decided it was time to serve the main course.

The kitchen was busy looking, to say the least. I bustled about, aiming for speed and accuracy. There was nothing worse than a tepid meal. As the homemade gravy began to simmer, I piled the remainder of the broccoli onto Alex’s plate and glanced out at the Mediterranean-style garden.

‘Do you want a hand in there, Chris?’ Alex’s voice pulled me back into the kitchen as fast as an email being sent. The gravy was now boiling rapidly, spilling down the outside of the saucepan and filling up the gas ring at an alarming rate.

‘Oops! You can hand out the plates in a minute if you like,’ I called back, rescuing the remains of the gravy.

Alex came in through the sliding door and stood at the other side of the bench top. His blue eyes travelled over the plates ravenously.

‘Looks good, love. Which one’s mine?’

‘Never mind yours. Hand these out first.’ Alex’s was actually a little fuller than the rest, a fact he realized with child-like gratitude when I finally handed over his plate. They say “The way to a man’s heart is through his stomach,” and that certainly applied to Alex.

‘Chris might know,’ Jim was saying as I sat down once again.

‘Might know what?’ My appetite was fast diminishing with each sip of this wonderful red wine.

‘Oh! That!’ I rolled my eyes dramatically.

‘Well, was it her or wasn’t it?’ Terry asked the question for all of them, although most had already heard enough of the rumour to know the answer.

‘Yes, of course it was.’ I put down my knife and fork anticipating what was coming next.

‘Do they know who the guy was with her?’ It was David who asked. The only one at the table who didn’t work at the same place as the rest of us.

Terry dabbing napkin to mouth; Jim with his glass of wine held in mid air; Alex grinning, waiting for the response; Karen pausing between the carrots and the veal; and David about to hoe into the duchesse potatoes.

Once I had divulged the hot gossip, I felt quite deflated. They all got into the whys and wherefores, but what did they really know. It was all hypothesising and a waste of time, I thought.

I collected the plates and dumped them in the nearest available space in the kitchen. Alex opened another bottle of wine while I went to put some more music on.

What a decision! Do I play something for me or for them? Perhaps both, which was easier said than done. Jim was into Floyd, Alex preferred Creedence, David adored Swing, and Karen, well she was into anything Terry was into. In fact, speaking of rumours…

I selected a subtle, neutral Steely Dan Best of and went back to the table.

The evening was half over. Nearly all of my hard-slaved labour had been wolfed down in a minute. God, I loved to entertain though. I just needed to learn the fineries of being a hostess. You know, the perfect lady bit.

I remember reading somewhere that a good wife should be a lady in the lounge, a cook in the kitchen, and a whore in the bedroom.

I figured if I stopped saying ‘fuck’ all the time and conditioned myself to sit elegantly and properly, I could pass the first one. The second one I felt I just about qualified for anyway. And I’m not being bigheaded. Anyone who enjoyed cooking could cook—and to me planning a dinner party was pure pleasure. The third one I refuse to discuss at the dinner table. Besides, it’s none of your business.

I glanced around, smiling at the others. There was gravy on Alex’s place mat, wine on David’s, pink frost lipstick smeared around Karen’s glass, a lone pea sitting alongside Terry’s dessert spoon, and candle wax in front of me. Only Jim appeared to have got through the meal in one piece.

Maybe it was because he wore designer label clothes? Indeed, Jim was a Yuppie before the word was ever invented. He drove a fancy car, was a connoisseur of fine wines, and wore Dr. Martens to work.

He was also divorced and it hadn’t been from choice. Since that fatal day when his wife had walked out on him, he had never really allowed himself to leave rock bottom.

The chocolate mousse went down extremely well if I may say so myself. Following it was the usual bicker between Alex and me.

‘Put the kettle on, Alex, please?’

‘Yes, after this cigarette,’ he said making a quick grab for one.

‘Yes, come on, Alex. Chrissie did all the cooking,’ Terry chided with a wink and a smile in my direction. Alex met my eyes across the littered table. He’d had one drink too many, and I was beginning to feel tired.

‘If you just put the kettle on, I’ll do the rest,’ I compromised. I knew the others were hanging out for a cup and so was I.

‘You put the kettle on.’

‘You lazy bastard,’ I said it sweetly but glared at him across the haze of smoke. In the end he conceded, left his seat, and performed the menial task. The others who had witnessed this argument before sat back and grinned with amazement.

I served the coffee in stoneware mugs, the tea in fine bone English china, and the sugar and milk came to the table in the crystal set Alex and I had bought for our third anniversary. With it I also brought out my homemade Tia Maria truffles (that Alex always says look like rabbits’ droppings) and left him to serve the port.

The evening was all but over. It had been another enjoyable night shared by the six of us. They really were wonderful friends to have. We yawned and stretched. I was thanked for the meal by all concerned, and then they were ready to leave.

Karen wanted to do a dinner next. She asked me to ring her concerning rosters. I said I would.

As they drove off, I breathed in the faint fragrances of the garden and stared up at the near full moon.

‘Let’s go to sleep,’ I answered. And as he locked up, I climbed beneath the covers. My head was light and fuzzy from wine, my mind tired.

Tomorrow I will sleep in.

Tomorrow I will give up smoking—again.

The lady closed her eyes; the cook would cope with the dishes in the morning. The whore was nowhere in sight.

I have been writing since school days and received a Highly Commended Prize for a Short Story in my final year of High School. Since then I have had many Short Stories and Poems published in a variety of literary magazines on and off line. I have won a few competitions along the way, including Poems for Passengers. This was a joint initiative between TransAdelaide and the Department for the Arts and Cultural Development. In 2011 I self published a book through Peacock Publications about my 27 years working as a Psychiatric Nurse at Hillcrest Hospital.

WHY WE CHOSE TO PUBLISH “Invitation to Tea”

In this charming piece, Christine Hillingdon creates a wonderful sense of place. Through the eyes of the dinner party’s hostess, she paints the setting, draws us into the characters’ lives, lets us be privy to their conversations, and we even get to sample the food. Then she caps it with a perfect ending previously set up in the story.