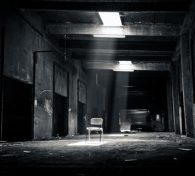 I was blindfolded and gagged and prodded through a maze of winding, dank corridors, with the muzzle of a gun jammed in my back. A foul-smelling, blinding wool cap was finally yanked from my head and I was shoved into a dimly lit space.

I took the only seat in the cramped, windowless room. A bank of phones and several computer screens separated us. I could smell cigar smoke but couldn’t be certain. There was a distant humming in the background. The two heavily armed guards that picked me up downtown at a construction site and threw me into an unmarked van and brought me here were standing right behind me.

“Thanks again for taking the interview, eh, sir.”

“My cousin’s best friend’s sister’s dermatologist’s niece was owed a favor. That’s the only reason you’re here,” he said.

Piles of dossiers, an assortment of assault rifles, and high explosives spread across his massive onyx and jade desk, a gift, I understood, from an ex-sheik. The walls were bare. The room was otherwise empty.

“Ah, yes, well, but I do appreciate your time. I’m sure it’s valuable, and thanks for not making the full-body-cavity search painful.”

“I never give interviews to anybody wearing clothes—too many wires and recording devices. Like everybody, you get a scrap of paper and a green crayon to take notes, so ask away.”

“You were on the cover of Hennigers’ “Ten Most Viscous Criminals Under Twenty To Watch” last year. How did that make you feel?”

“Are you fucking serious? I mean, I’m thirteen and finally getting the kind of recognition I deserve. Stinking, scum-sucking rag should count themselves lucky I gave them a photo of myself.”

“I know the story has been told, but just to be perfectly accurate for my readers, how did you become such a vicious international gangster?”

“Yes, I’ve heard that about you before. Very admirable, but I want to go to the deeper truth behind your success. The real you? What made you different from all the other twelve- and thirteen-year kids out there murdering their way to the top?”

“You really want to know?”

“And you heard what happened to the reporter who interviewed me last year for Kid Criminals’ international issue?”

“Hey, I don’t expect you to tell me the truth.”

“No. Never heard of any such story and never read the magazine.”

“I heard the reporter went to India. A religious idiot. Imagine praying to some chicken-shit non-crime-related god? The whole idea is ridiculous. I told him, and you know what that foolish fucker said?”

“Idiot said it was a family tradition that after he spent a decade as a crime reporter, it was a fucking tradition to go to India and become a monk. Did you ever hear of anything so stupid in your life?”

“A monk? There’s no money in monking. Not one successful international crime reporter ever, I mean ever, became a monk. He should have quit and opened up a tap-dancing school. Hell, I would have fronted him for that kind of industriousness.”

“I didn’t think you would bring that up.”

“Hey, I’m an honest guy with a reputation to protect.”

“So, since you mentioned it, and of course you don’t have to answer this, but is it true that you control over 90 percent of the tap-dancing schools and massage parlors in this country and most of Western Europe? And, again, and I don’t want to pry, but if you would answer, I mean if it’s not too personal, is that statement or any part of that even remotely true?”

“Thanks. That’s very kind of you to clarify. That’s never been part of the official record. Even in Payback Magazine, soul of the snitches.”

“Hate that so-called newspaper too.”

“Did you know you had to have murdered at least a dozen people to even get a job there?”

“Except what they don’t tell you is that they never verify anything. Can you imagine a job interview where references aren’t checked? Now, what else do you want to know? I don’t want to miss my morning snack.”

“I don’t want you to miss it either, but I’ve been standing in the rain in front of that abandoned construction site for the last two days without food or water, waiting for your men to pick me up. I wasn’t paying attention to the time. If you want, I can come back when you’re finished, and we can start again from there? Whatever you want is fine with me.”

“Hey, kid, a guy in my position, I have nothing to hide, but it’s also true that I lead a life of unrelenting stress. Every day there’re decisions about who to kill, who to spare, what candy-ass syndicate to crush and which to trust. Which Federal agency is trying to infiltrate my organization and who wants to become a contributor to grow my empire. It’s a demanding life that few outsiders appreciate. Did you know that more criminals at my level of global ruthlessness take their own lives than dentists? Dentists. Doctors Nathaniel Connors and Roman Livingston from Western Illinois College published a paper on that for Murder and Mayhem Magazine a few years back. Very unsettling, I can tell you.”

“I’m sure it was, so maybe I should come back after your snack.”

“Thanks, Rupert, and don’t forget to genuflect subserviently when you bow yourself out of here. That’s it. God, it’s impossible to get good help anymore, no matter how you threaten them and their family and their family’s friends.”

“See, it’s all technique and paying attention to details. You have to break the thin, dark chocolate dome of the Mallowmar when its fresh in precisely the right spot and with just the right pressure so it cracks evenly around the sides before you put it in the freezer for at least a month so the soft marshmallow center freezes evenly before they’re aged crunchy and ready to eat.”

“I can see that you’ve thought that out carefully.”

“I think everything out carefully. That’s also a secret to my success. With a global stranglehold on tap-dancing studios and massage parlors, my black-market halvah mines in South America, and indirectly influencing most of the dried prune cartels in Brazil, it’s all about the future.”

“Interesting,” I said, scribbling away with what was left of my crayon.

“Did you know I’ve read over a hundred twenty-three books on strategic planning? Every damn page of all fucking hundred twenty-three? Now, you ask any of your pretentious, feebleminded fiends, and I doubt if they’ve even glanced at half that many, which is why they’re stuck in what The Psychology of the Criminal Madman Review, classified as ‘the Petty International Criminal Syndrome’ and have no real future in creating world-threatening enterprises.”

“Here, take another scrap of paper.”

“I hope you’re not going to ask how much money I have or where it might be stashed, because the last reporter who asked me that disappeared. You look a lot smarter than that fool. Jerk must have been pushing twenty years old. And that was as old as he ever got.”

“You mean because of my generosity giving you more paper?”

“Well, let’s not have you write that down too. I wouldn’t want the world to get the wrong impression of me.”

“No, sir. Absolutely not. No mention of it anywhere.”

“And I don’t want you to spill your guts to my biographers after I’m gone with personal shit like that. Bad for my historical image.”

“Do you always have the same amount of Mallowmars each day, or does it depend on your mood or how busy you are?”

“See, there you go, whatever your name is, you don’t want to cross the line by asking such intimate, emotionally charged questions. I let you into my personal life, but shit like that’s none of your damn business. Can you imagine what would happen to my reputation if those kinds of details ever got out?”

“Right. Of course. So, if I may, and not to take up any more of your time, can you tell me how you’ve been able to avoid criminal prosecution after all these years?”

“I said I could tell you, but I have no intention of giving up that secret. Now get the fuck out of here, you second-rate quill-pusher, and let me get back to work.”

Arthur Davis is a management consultant who has been quoted in The New York Times and in Crain’s New York Business, taught at The New School and interviewed on New York TV News Channel 1. He has been published in eighty journals, a single author anthology, nominated for a Pushcart Prize, received the 2018 Write Well Award for excellence in short fiction and, twice nominated, received Honorable Mention in The Best American Mystery Stories 2017. Additional background at

www.talesofourtime.com
and at the Poets & Writers Organization (ARTHUR DAVIS).

WHY WE CHOSE TO PUBLISH “Killer Kid”:

Prolific short story author Arthur Davis has once again delivered a well-written and amusing piece of well-done fiction with snappy dialogue and well-drawn characters that make for thoroughly enjoyable reading.

The kid is a bit reminiscent of Eoin Colfer’s main character in his “Artemis Fowl” books (not the movie, which completely missed the mark, in our opinion). And interesting characters are what make for great fiction.