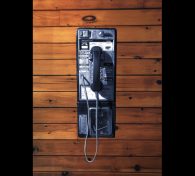 Nick Patterson was snoring lightly, forming a trio with his ticking clock and the chirping crickets, when the phone rang. “What… What the…,” he said, jarred from his sleep. He looked at the clock: 2:17 a.m. He escaped his tangled covers and sleepily answered the ring. He could hear the muffled sounds of car horns and chatting people walking by.

A man’s voice slurred, “Is Audrey there?”

“H-h-hold on,” the man continued. “I’d better… better put in another dime.” There were three quick beeps as he did so.

“Who are you looking for?” Nick inquired, sure now he was dealing with a drunk.

“Audrey!” the man repeated. “She’s my wife.” After a pause, he inquired, “What are you doing at my house?”

“I don’t know any Audrey, pal,” Nick answered him, growing annoyed. “Do you know what time it is?”

“It’s a little after two. The bar just closed.”

“I wanna talk to Audrey,” the man said, spacing his words.

“When will she be back?”

“The hell she doesn’t! This is our phone number.”

“This is my phone number.”

“No, you don’t. I have to get up to go to work in a few hours, so I want you to listen carefully to me,” Nick summed up, trying to stay calm. “Are you listening?”

“There’s no Audrey here,” he said slowly. “Never has been.”

“You’ve had a snootful. Hail a cab and go home. Sleep it off. I’d suggest some strong black coffee when you wake up. You’re gonna have a doozy of a hangover.”

“Did you hear a word I said?” Nick angrily asked. “No Audrey! You’re so bombed, you’ve misdialed and don’t even know it.”

“Call her when the sun’s up… if you can see. Don’t call me back!” Nick slammed the receiver down. “Damn drunk!” he muttered before settling in to try and get back to sleep.

The next morning was a rerun.

Nick told himself he wouldn’t answer the phone. But what if it wasn’t the lush? Mom had been ill lately. What if… Oh hell! The same guy, drunk again (or maybe still): “Hello, Aud… Audrey?”

“I thought I told you not to call here again?”

“You’re looking for my fist in your face! Go home and sleep it off!” Nick hung up hard. He yawned, and a thought came to him. He picked up the receiver and dialed *69 to call the drunk back. The phone was answered by a different guy.

Nick was confused. “Hello,” he answered. “I’m sorry to bother you so late… uhm… early.”

Alan chuckled. “No problem,” he replied. “I was just cleaning up. We’re closed though. We open tomorrow at 11:30. The special’s meatloaf.”

“Look, I just got a call from your number.”

“There must be some mistake.”

“When did you get the call?”

“Just a couple of minutes ago.”

“The wires must be crossed somewhere,” Alan speculated. “This is the phone behind the bar. No one’s been on it all night.”

“It’s my place. If anyone used this phone, I’d know about it.”

“I could hear traffic behind the guy who called me,” Nick added. “Do you have a payphone there?”

“No. No need. Everyone has a cell now.” Alan paused and said, “A payphone? Really?”

“Definitely. I heard him drop in a dime.”

“I don’t know what to tell you. This place hasn’t had a pay phone since I’ve been… Say, wait a minute!”

“It did have a payphone—years ago—before I bought it. I used to come in here to bend a few some weekends. The previous owner got rid of it after the accident.”

“An old timer was talking on it when some young punk lost control of his car and hit him,” Alan related. “Slammed right into him and then into the bar! The poor old guy was dead before the ambulance got here.”

“But the phone connected me to you,” Nick added. “I wonder why?”

“I don’t see how, unless the previous owner had that number transferred into here.”

It was early afternoon when the phone rang again. The woman sounded elderly, and her voice had an odd echo to it. “I understand you’ve been getting some calls for me,” she said.

“Who did you say you are?” Nick asked.

“Audrey Lange,” she said. “My husband, Kenny, called you the past two nights.”

“So you’re who he’s looking for,” Nick responded, relieved. “Can you please make sure he doesn’t call again?”

“I’m afraid that will be… complicated,” Audrey informed him.

“Because I’m calling from… far away.”

“Heaven has telephones?” he asked, amused.

“Nothing so primitive as that. We have… ‘ways’ of communicating with the living.” Nick said nothing, and Audrey found the silence telling. “You don’t believe me?”

“Lady, I’m not a religious guy, but if you can stop your husband from calling and waking me up, I’ll believe you’re Elvis.”

It was Audrey’s turn to chuckle. “I suppose I’ll have to settle for that.”

“He’s stuck in a loop,” Audrey explained. “He should have joined me years ago—after the accident.” She sighed and went on, trying not too successfully to control her emotions. “It was—oh, dear!—nearly fourteen years ago. We had a quarrel; he stormed out of the house. He called later from the City Tap. I think he was going to apologize and come home, but…” Here, she lost the battle with her emotions and choked out, “…the driver of that car lost control before Kenny could reach me. He died in front of the bar.”

“He’s been stuck in this thing for fourteen years?” Nick asked. “What’s keeping him from dying?”

“But why is he calling me?”

“Your number is similar to what ours was back then. In Kenny’s state, he probably thinks he’s calling home. Can you please help me?”

“He’ll probably call you tonight. When he does,” she said, “please answer. I’ve arranged to be on the line. We’ll all be able to talk. If I can speak with him, maybe I can put an end to this.”

It was around that time, but Nick wasn’t in bed. He was pacing the floor, waiting. When the phone rang, he rushed to answer it.

“Is Audrey there?” he asked.

“Honey, I’ve been trying to reach you.”

“I know,” she answered. “Is there something you want to tell me?”

“That fight… it was all my fault. Can you forgive me?” he asked.

“I love you,” she answered him. “You’re forgiven.”

Nick heard the screeching tires approaching Kenny. “Great! I’ll be…” Terror came to his voice. “Hey, mister!” he called. “Watch out!” The tires squealed as the driver tried to stop the car. Kenny screamed. With a sickening thump, the car hit him. Nick winced at the sound. Screams went up from onlookers. The car crashed into and through the brick wall, sending it into the bar. Kenny’s phone connection was cut off.

“Thank you,” she said through tears. “It… It needed to be done.”

“Is there anything I can do?”

“His ordeal is over,” Audrey happily continued. “I must run. My time is—”

The line went dead. “Audrey? Audrey!” Nick called urgently. Like he had done before, he auto-redialed the last number.

“Sorry,” Nick responded. “I… I dialed the wrong number.”

“So… no problems?” Alan asked.

“None,” Nick told him, cracking a smile. “Everything’s alright… now.”

For several years, Mike Murphy has been primarily an author of audio plays. He’s had over 150 of them produced in the U.S. and overseas, many for Audible. In 2016, Mike won a Moondance International Film Festival award for his TV pilot script “The Bullying Squad” and a semi-finalist award for his audio play “The Forever Pill.”

His prose work has appeared in Dime Show Review (including in their second “best of” anthology), Gathering Storm Magazine, Zeroflash, Zetetic: A Record of Unusual Inquiry, and The Flash Fiction Press.

In 2015, Mike’s script “The Candy Man” was produced as a short film under the title Dark Chocolate. In 2013, he won the Marion Thauer Brown Audio Drama Scriptwriting Competition.

More of his stories will be published shortly in The Fifth Di… and the Inwood Indiana/Prolific Press Anthology The Pop Machine.

He keeps a blog at audioauthor.blogspot.com

WHY WE CHOSE TO PUBLISH “Last Call”

We rarely publish two pieces by the same author in one issue, but when Mike Murphy sent us two excellent stories that both fit well with the other pieces in the issue, we had to put them together.

While the individual elements in “Last Call” are not new, the author author blends them in a fresh way that leaves us satisfied at the end.