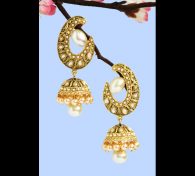 Self-care
Morality demanded re-use, and so there was usually a thick wad of tissues, often crinkled with hastily wiped-off upper-lip sweat. Tissues were the most important beauty product of them all, especially in Lahore.

Memories
She also had a pair of traditional jhumkas somewhere beneath all the layers from the time that she had taken them off. Anum loved the gold-and-white half discs of metal on her ears, but they had poked and prodded her partner as they slid up and down uncomfortably on each other on the sofa. She had forgotten to put them back on later, and thus they lay at the bottom, the only remnants of the latest relationship to fall firmly, but necessarily, down a manhole.

Love
She had kept a browned Polaroid family portrait in her wallet when her mother had gotten sick for the first time. Little Anum cradled her recently arrived brother, supported by her mother’s arms around her. Her father and older brother stood at either side. Almost three decades later, the dynamic remained the same: the youngest brother was learning how to boil water before heading off to university, and Bhai was still trying to stand upright, drinking later into the night now that he was unhampered by his ex-fiancée’s curfew.

Somehow, when things went in, they had a problem getting out. A yellow and white tube still took up space from the time Billi had contracted an infected wound from the robust tom who had attacked her cat in their own garden. Anum’s first thought, through example of her mother, was to rush out and solve the problem with her slipper. Upon closer inspection, however, she had noticed the blood and foreign hair under Billi’s claws. So Anum had simply kissed her darling pet, and dressed the wound every day for two weeks.

Identity
A recent addition was a fragile pamphlet that she was quite proud of. It held the text Anum had translated from English to Urdu to distribute to the women in the outreach program. The first few drafts had had helpful images in it too, but that effort had been quickly suppressed. It was not as effective to convey information about reproductive health with scientific words without the diagrams, but Anum and her team had done their best. The pamphlet now also had a burn hole, but proved to be useful still.

Awareness and grit
Two extra-large pads floated near the surface, without their bag of shame. Just yesterday the man at the counter had put her pads in a brown paper bag, which he then put in a plastic bag for extra security. Her first reaction to unpleasant situations was typically a string of Punjabi adjectives that she had also learnt from her mother. She had, however, kept her cool, returned the two layers of unnecessary protection, and walked to her car in a dignified manner, determined to flash the pads.

She also kept a scarf. The colours and prints changed every few months, but a scarf always remained. She didn’t wear it often, but kept it on her, just in case. She had had a woman’s body for more than two decades now, but it still felt awkward to have breasts in Liberty market. That, however, did not usually stop her from picking fights with the socialized degenerates who forgot all their lines when a woman actually spoke back to them.

Humanity
Anum made sure that there was always a lighter, but the cigarettes needed to be replenished. Her cousin Ali had come over and smoked away her pack and other things, while her mother had sent tea and sandwiches upstairs. Ali had stayed only until the goodies lasted, and Anum was left wondering if her cousin was depressed. The cousins had always been the kind of best friends that kept secrets from each other.

Forgiveness
Buried beneath it all was yet another home pregnancy test. It was difficult to throw out, even though Anum no longer had any urge to use it. She knew anyway that only one line would appear, whereas two months ago there had been two.

Fizza Sohail is an educator, learner, and explorer from Pakistan who likes to write about subjects considered “taboo” by society. She nurtures a little bit of a hero complex, sometimes writes textbooks, and hopes to help end world illiteracy.

Author Fizza Sohail takes us into another culture in this resonant, and at times amusing, flash fiction piece that also gives us a universal perspective independent of the culture it’s set in. By chance, it pairs very well with Rickey Rivers’ “Children,” also in this issue.