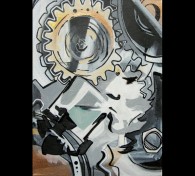 I’m walking home with Lost Signal under my arm from a rejection that is the crown jewel of all my rejections. I only made it five steps into the art director’s office before he practically threw me back out. Last week I managed eight steps. Huge clouds threaten rain, and I’m tempted to use the canvas for cover, but pity for it forces me to run beneath awnings with the painting tight against my sweater, protecting it from the approaching storm.

People stare, undoubtedly wondering what masterpiece this wild woman in borrowed clothes has stolen. I imagine battalions of police in pursuit, fighting through the chaotic streets to haul me off. I must imagine this, because in truth the few others on the sidewalk are silent, none of them police, and if it rains, and it pours, I’m afraid I will kneel down on the sidewalk, touch my head to Lost Signal, and cry until someone trips over me.

Eventually I beat the storm to an apartment for which boarded-up windows would add class. Six flights later, I’m inside and on the couch. Lost Signal is face-down on the floor. I reach for the remote, but grasp air until I remember Ben doesn’t own a TV. Imagining myself the picture of anguish lying here, I wonder why he isn’t around to take a photo so I could paint it and have it rejected.

Ben steps in at that moment, and I briefly entertain a career change to phone psychic.

“They didn’t like it?” Ben nudges the painting with his foot, probably making sure it’s dead before venturing further.

He sits down on the remainder of the couch and rubs my ankle. I suspect a lesson on making choices in life, but he surprises me.

“My deal fell through. I’m moving out in a couple months. Can’t even afford this place.”

I sit up and shift from self-loathing to concern, because the only option besides this delightful, rodent-adjacent hovel is my stepmother’s house, which is no option at all.

“Sorry.” For once I’m sincere, because he hasn’t asked for anything after six months of living rent-free, and I didn’t offer.

He looks off into the distance, or at the stained plaster wall ten feet away, and moves his hand up to my knee. “It’s not your fault. Everyone’s having trouble these days.”

And then my life reaches a strange moment where an understanding, caring man becomes worse than the alternative. Where it is justifiable for terrible things to be said and never taken back, and the fact that they aren’t is enraging. I don’t want to be angry at him for not behaving the way he has a right to, but disappointment at my own failure merges with this newest sensation, and all that keeps me from leaving him right now is bad timing.

“I still have this month to tie up loose ends. Do you want dinner?”

“I want a picture of me lying here.”

“I admire your drive.” He grasps my reasoning with amazing speed and already has a camera out. “How many shots?”

The shutter clicks three times, but once is enough for me to dismiss the idea of breaking up. The love has evaporated, but my compassion remains.

“Is it raining yet?”

Ben lowers the camera and I see confusion. “Raining? It’s a hundred degrees out.”

His perplexity deepens. “Celia, the sky’s been clear for days.”

I’m up early next morning, though used to sleeping well into the afternoon, as befits my decadent lifestyle. Despite only a couple hours’ sleep, I don’t feel tired. I’m anxious in fact. Throughout dinner, before bed, I kept looking out the window, seeing the clouds Ben swore weren’t there. I was smart enough not to point them out, because an artist can only risk being so crazy.

The sun rises in the distance, but appears shrouded. Over it, the clouds are a deeper gray and appear to be getting closer. I can even see craters and fiery light passing between them.

At that moment I realize Ben is right, and there are no clouds. Countless, massive meteors make a steady charge toward Earth, though I know they must be approaching very, very fast. My first horrible thought is that all Ben’s problems will be solved. Mine too. I should be scared, but all I feel is relief that the decisions I avoided for so long are finally out of my hands.

Maybe I am crazy if nobody else notices a billion flaming meteors streaming to Earth and blocking out the sky. But I know I’m not, and the idea that I’ve been allowed to see something that has presumably escaped everyone else’s attention gives me an unheard-of passion to create, to do.

I don’t have to tell myself that art comes first. I know it does, and realizing everything will probably be over soon reinforces that knowledge. My regrets are indistinct, vague as the children I might’ve had or the man I could’ve married. I consider waking Ben and telling him to call his parents. Instead, I let him sleep.

As quietly as I can, I get set up and pull out the last blank canvas, twice as big as my field easel. I have no idea what I’m painting, but it takes every color I can mix. Even when the sky grows painfully dark I don’t stop, and I refuse to stop once the heat increases. Whether I finish or not is meaningless; I don’t have time to fall in love or change my life, but I have time to paint.

Sam Barnhart has written flash fiction for the past year or so. After discovering the less he says, the happier people seem. He lives in South Florida and is a terrible painter.

WHY WE CHOSE TO PUBLISH “Lost Signal”

Great stories are those that get better and take on new meaning each time you read them. With Lost Signal, author Samuel Barnhart scored a winner for us in that regard.

At our request, the editor of Silver Blade, one of our sister magazines, read this and commented, “This piece is so rich that it’s hard to believe it’s only 900+ words. I’m sure I’ll be thinking about it long after today. The unanswered questions are a large part of its attraction; they open infinite spaces in my imagination. Had the writer tried to explain the unexplained, the piece would have fallen flat. I have to admit that I wrestle with Flash as a form. A piece like this answers the question: What is the point of flash fiction?”

What’s also intriguing about this piece is that there are several equally plausible answers for what’s going on with the main character. Accomplishing that is quite a feat of writing.