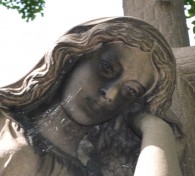 There were advantages to being cremated. Lord knows the dead have enough time to think. An obvious advantage was being portable. An urn is easily moved about from house to house. Taken along when a relative moves. Less convenient, the dead wife buried under the apple tree.

Margaret was the dead wife. The first dead wife. There had been another dead wife. That one went into the ground. Margaret often wondered what the ground was like, but she’d never wanted to go under the ground. Even young, she knew there’d be no ground for her. She’d made her wishes known.

This third wife seemed old to Margaret. Like a grandmother. But then, her husband was old now too. How long now, she wondered, had she sat up on this mantle?

The house was shut for the winter. She knew it was winter. Not because of the cold. She didn’t feel the cold. She sensed it. Like in a dream, she knew things.

That’s how she knew when the grandson broke in. Not her grandson. She’d had no children. The third wife’s grandson. A precocious boy. Full of questions. She felt him there, like a clap of thunder. You can feel it before you hear it. He didn’t scare her. No, he’d broken the boredom. There was a lot of boredom the dead had to suffer.

“That’s your Great Aunt Margaret. She drowned in the lake.”

Of course, she was no one’s Great Aunt. But she enjoyed hearing them saying her name.

How old? Thirteen? Yes. No older than that. Precocious? Yes, perhaps. Sad? Yes, definitely sad. Why else break into the house? Dressed in black, she imagined. The kind of boy who wears sunglasses when there is no sun.

Then the urn moved. It hadn’t moved in over twenty years except to be dusted. Yes, she was definitely moving. She was being held. Fondled. Jostled. Twisted.

The boy had opened the urn. A panic ran through Margaret, because she’d always wondered what would happen if her ashes were scattered. Dispersed like a cloud blown away in the wind. Was she about to be dispersed? Accidental as it might be, a boy of thirteen would give it little thought. Or would he?

But she wasn’t dispersed. The lid screwed back on the urn. But Margaret didn’t go back onto the mantel. She found herself, instead, in a backpack. Soon, she was out of the house. He was taking her somewhere. But where? But why?

The boy took her out onto the frozen lake. This was, of course, a summer place. A community of cabins where people came for vacations and precious few lived here year-round. Margaret knew that she was on the lake now. It was this lake where she had drowned. A freak accident. No one’s fault. Her husband warned her not to swim alone, but she’d ignored him. Nor had it been a horrible way to die. There were worse things, she imagined. Being dead, in the urn, she had plenty of time to imagine.

The boy put the backpack down in the snow. So close now to the water, frozen, but what’s the difference? Water is water, when you have no body to feel it. The boy was on his back, making snow angels.

An odd kid, alone out here on the lake. Margaret wondered, where were his friends? Where were his parents? But as soon as she thought it, she was moving again. On his back now, in the pack, being jostled. He was running. Running across the frozen lake.

Then a door opened. They were in a kitchen. More people. Two more. His parents? No, old people. Like her husband and that third wife. Grandparents, she thought. But why were they here? These cabins shut down for the winter.

There was shouting. They argued about something. The boy slammed a door. She was out of the backpack now. Being held. Twisted. The urn was open.

Now Margaret was afraid. Well, not afraid, like sweaty armpits. Afraid of what? She felt the boy’s finger stirring her. Oh, that was odd. Like a wave, his finger passed through her, and she felt like she was made of water or air. She felt the wind, not a gust, but a whirlwind, or a dust devil. For so many years she’d been made of stone. And now the wind.

She was tipped onto her side and poured out into a pile like a pyramid on a wooden surface. What? A Table? A floor? She felt his hand brush over her. She spread out like a pool of oil, no longer made of stone. Almost as though she could stand up and walk away. She felt his fingers provoking her, felt a thrill that was almost an orgasm. She was Margaret. She was a woman. Out of the urn. She didn’t know where she was. And she didn’t remember how she’d gotten here. She wondered, where was the urn? Then she wondered what was her name. Then she wondered what was a woman. Then she wondered why she needed to remember. And then she no longer cared.

Max’s words have recently appeared in: The Sun, 10,000 Tons of Black Ink, DuLügstSoSchön, FICTION on the WEB, Foliate Oak, Mouse Tales and Fabula Argentea. Max’s short stories have twice been nominated for the Pushcart Prize and once for 2013 storySouth Million Writers Award.

Max can be found scribbling with friends at coffee shops in stormy Seattle, WA.

WHY WE CHOSE TO PUBLISH “MARGARET”:

A clever story line plus a unique voice caught our attention with this piece. We’ve seen too many writers violate the point of view of a story to explain to the reader what was going on. Author Max Detrano doesn’t do that, choosing instead to trust the reader to observe events from a very limited perspective and to draw conclusions. And we say bravo! on a job very well done.