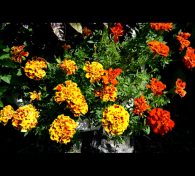 with a nod to Robert Frost

I’m the neighbor everybody likes.

So when she moved in next door, I was the first to welcome her, with a jar of homemade apple butter and a coupon from the local farmer’s market. And she responded in kind, with an offer of coffee and a nice long chat. How happy I was that she seemed so normal. Finally, the universe had sent me someone decent, just your average transplant from the city, a schoolteacher, retired, married twice, maybe ten pounds overweight, maybe more—who’s counting? And she told me right off that she loved gardening, claimed it was her sole passion. “What about your husband?” I said. I was joking. I knew what she meant. But I was riding high, downright giddy that she seemed just fine, for you can’t pick your neighbors, and I certainly could do worse. Besides, her yard was going to be lovely and look lovely next to mine. Gardening’s my passion too—not “sole passion.” I’m not so soul-less to say something that ridiculous. Like your yard is everything.

But then her garden… grew, nothing horrible at first, but really, can you imagine, silver bells and tiger lilies and too-tall hollyhocks, there, where nothing was before, just blooming, burgeoning really, out of control and creeping closer and closer to my property. And hey, I’d be the first one to say, you can do what you want on your own land, and it’s nobody’s business but your own, but it’s getting a bit claustrophobic now with those two big azalea bushes framing the mailbox and a zigzag line of marigolds straight up the side—a flower I’ve never liked. Big orangey blossoms, round as mushroom caps, near-neon in their hardy sheen. Not natural at all. I bet they glow in the dark. So I’ve started every day now, right around dusk, when she and her husband go in for dinner, after a marathon work day in their passion-filled garden, with their gardening caps and their plastic gloves and their spongy knee pads, yes, I’ve been going out and measuring—just with my feet, mind you—measuring how close those marigolds are to my property, and chuckling to myself, thinking, she’s lucky, they’re both lucky, that I’m their neighbor and not some lunatic who’d complain.

But Jesus Christ, rocks now? More than a wheelbarrow, maybe two. Irregular-shaped, medium-large, lining her garden. Where does she get them? River rocks, I think, piled up to keep her mounds and mounds of ochre-red mulch in check. Well, you might say, good, she’s setting off her garden from mine, and keeping the border straight down the middle; but you see that border is right on the line. No space between us now, no companionable and appropriate open space. I’ve checked the neighborhood bylaws, and they say ten feet of right-of-way for underground cable, gas, and sewer. Doesn’t she know the risk she’s taking for both of us? What if those roots dig down deep and cause me trouble? Or trouble for my neighbors? Or trouble for her? I’m not a monster, but my yard is getting smaller, or looking smaller against those ugly blue-grey rocks, clashing with her tangerine-on-fire, atomic mushroom-cloud-cap marigolds. They look like they come from Mars, they’re so big and top-heavy. And hard to kill too, standing up like spikes in the lawn separating our property. I could just snip, snip, snip them right off. And how would she feel then?

But when she’s in her garden, she pretends nothing’s wrong, that she’s done nothing wrong, and I think that’s what gets me the most. And she waves her fat hand whenever she sees me, and her husband does too, as if they’re just the cheeriest couple, the nicest neighbors ever. She once sent over tomatoes from her backyard garden, as if that would make up for her front-yard garden crowding my own, destroying the delicate curve of my sweet peas and Sweet Williams and completely overwhelming my sky-blue morning glories with her garish, grotesque, gargantuan marigolds, their bulbous, radioactive-orange heads beaming their poisonous rays my way. But hey, I said thank you, thank you very much. And I made over those sickly-green tomatoes and one wormy squash as if they were bestowed by the Queen of Sheba. I’m known for being nice in the neighborhood. Ask anyone.

And it’s not because I think this is a big deal. I know it’s not, but I’ve been thinking that maybe it would do her good, or be helpful—well, kind of—if someone taught her a lesson and mowed down those marigolds or hacked off those hollyhocks or pulled down that fucking flower trellis one night. Then she could start over, humble now, realizing the neighborhood can’t help but hate her and her husband and her overgrown garden. I’m joking. I couldn’t do that.

But I have been talking to my nephew Carl, just blowing off steam. He’s been in a few scrapes with the law, nothing major. Some house-egging on Halloween and a ridiculous charge of bullying at school. Can you believe it? Some little snot who wanted to PC him into the ground because she couldn’t take a joke. And I helped him with that, told him what to say, how to say it, and he’s back in school now, and he owes me and he knows it. So he and his friends are going to rough up the garden tomorrow night, nothing horrible, just a dirt-bike ride over her lawn, a few clumps of sod thrown here and there, and a couple of BB rounds to mark up her mailbox—maybe one long dovetailing shot through her kitchen window, when she’s asleep, of course, nothing dangerous. And I really think I’m doing her a favor, so she can begin again and figure a way to fit in with her neighbors and push back her garden just a foot or two. Just a foot.

WHY WE CHOSE TO PUBLISH “Marigolds”

We don’t publish a lot of flash fiction, but when we do, this is exactly the type of well-written piece we look for. Author Marina Favila also demonstrates how a well-crafted opening line can suck the reader in. After “I’m the neighbor everybody likes” you just know that it can’t possibly be a true statement about the character, and you want to know more. That’s what good fiction does: it makes us want more.