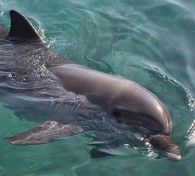 They all deserved to die. They were cruel, ruthless, driven by greed, and isolated one from another by distrust, grudges, selfishness, and constant insidious plots to escape alone with more than their share of whatever they had just stolen last. Foul and dirty, they were a ship of pirates. A ship of fools.

Yet they fought death to the last, raining shells upon their attackers, setting the stores on fire, slicing at limbs with swords and scimitars, curved blades from the islands, rope or wire for a garrote. Blood everywhere. Screams, confusion, and the acrid smell of smoke.

Like any, he deserved to die. As his body left the planks, fell into nothingness, and then came hard into a cold blackness, he thought he was well and truly dead. His body was wiser; it found a broken bit of lumber, and when he slowly dragged back to consciousness, he was flung onto the rough wood, water lapping against his lacerated chest. With every bit of strength left, he forced his arms to cling more tightly.

In the water before him, part of a man rocked with the waves. He could not say who it was, nor did he care. Something brushed his side, and he moved his head to see that it had also been human, once. Slowly he worked his head around and, blinking against the stinging waves, he saw, stretching in all directions, the remains of a ship and its crew. It was a flotilla of death.

No ship was in sight. Their attacker had either left the watery battlefield in search of further victories, or it was here, too, timbers and broken pieces of men, with no allegiances now but to those who rule the dead.

He closed his eyes and leaned against the water-washed wood. The tar would keep water out; the beam would last till his strength was gone and he slipped into the flood like his fellows. The horror of it chilled him, or perhaps the sea was seeping into his bones and sinews. Soon enough his struggle would be done.

He tried to pray, but his mind, growing cold and dark, could frame no words. With half a thought, he remembered the mark he had tattooed on one forearm. It had started as a cross to please his first sweetheart. Then he had traced it over with twisting snakes, after he lost her. He would have wished it something holy now, so he could think on it, as words failed him. But he had gone too far to undo the marks carved on body and soul. Mercy must seek him out; he had no way to summon it now.

Darkness was falling, or his eyes were failing. Among the bodies, mists began to rise, thin wisps of white that wavered, sometimes tilting toward one another like crones consorting, or drifting apart, chill and alone. One drew near to him, its breath cold and dank like the mouth of a cave, a tomb. If he breathed it in, he would pull into himself the death that floated, waiting, all around.

A flash of lightning shot through the water. Was this was death, this bright swift unearthly light skimming the water, cutting its way to him, the last unclaimed one asea? He had no voice, but his body shrieked, clutching the jagged wood like the last hope on earth. And when his arms were knocked away, he fell truly into the drowning waters.

Then he was moving, water overhead, then up for a ragged breath in the tangle of rotting cloth, the brush of cold fingers, strange foam spilling into his mouth. Then nothing—the water settling back to its easy rhythm, and he moving with it, rising and dipping rhythmically, at ease against a long sleek stone or a bed or flesh.

Yes, firm smooth flesh. As his head broke the surface, he saw his savior, the silver body of the creature they call a dolphin. As it pushed him, lifting with its large head, he reached and clutched at its fin. A small cut gaped on its back, with a sliver of wood that worked its way out as the water washed over them. A shard of his beam, he supposed, as the creature plucked him off.

It swam steadily, and he rested against its back. The sea was clear now, hiding any death in the depths, clean and at rest. He felt a helpless gratitude that the creature had pulled him away from all that horror. If die he must, well… it was purer, here.

They moved toward the sun and the south. Gradually, the waters warmed, but perhaps it might be only his fear fading. He could not say why it was such a comfort, the silent creature beneath him, cradling him in this softer, sweeter wash. It was more than he deserved.

Hours passed, and the sun rose. He could feel his strength escaping, and no land was in sight. Would the creature carry him till he was only bones? Or would it know when the spirit left? He might let go at any moment; the sea called his name.

But something else moved on the horizon. He saw it, lost it, saw it again, and wondered if he was now finally mad. Or was another body floating to meet them, bringing death back to taunt him?

Still it grew till even his weakened eyes could distinguish… sails. For a moment, hope leapt up in him like a fish breaking the waters. Just as suddenly, the creature recoiled and turned as if to flee. But the ship was coming close; across the water he could hear voices, and he clutched the dolphin’s fin. Slowly, it turned again and headed toward the vessel.

It headed toward the men and the drawn harpoons. Indeed, death was approaching. With an effort, he stretched his cramped fingers and let go of the fin. But the creature caught him up, pushing him forward, toward his own kind, his very brothers. As it moved alongside the ship, he made one final effort, and with a kick, threw his body over the creature’s back. The harpoons found their way to his body instead, and as he felt this consummation, the animal slipped away.

For an instant, they met under water, almost touching, till the dolphin turned and fled, a second small, glancing wound forming almost a cross on its flank. Strange hands pulled up the harpoon and shook his remains into the sea.

Having worked in a variety of fields, R. C. Capasso is now focusing on writing in speculative fiction and other genres. Recent publications have appeared in Infective Ink and Black Heart Magazine.

WHY WE CHOSE TO PUBLISH “MERCY”:

No words we could offer would be adequate to explain our decision to publish this powerful piece. We will simply leave it to our readers to decide if we chose wisely.