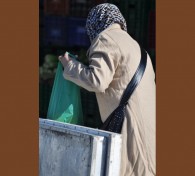 A fly crawls across the ceiling; he tracks it with his eyes until the alarm sounds from the nightstand.

He slaps it silent without looking.

He’d been watching the fly for over an hour.

He swings his legs out of bed, tossing the blanket from himself hard enough so that it lands in a pile on the floor.

He walks to the bathroom.

The fluorescent tube above the mirror has a blue hue to it.

It makes him look sick.

His eyes are as sunken as looted graves.

His cheek bones jut out sharply.

He imagines tiny rock climbers dangling off each one, attempting to get up and over with tiny lengths of rope and pick axes.

They race one another.

What would the prize be?

“Pain,” he says through the froth.

He bends and spits.

Blood and fluoride mingle together into something pink before sliding down the drain into nowhere.

He starts the shower.

He removes the yellowed T-shirt that hasn’t been white in a long time then drops it to the tile.

He pulls down his faded flannel pajama bottoms. They fall to his ankles; he steps out of them.

Steam fills the small, filthy bathroom and envelops his emaciated form until nothing but a dark, elongated silhouette is left.

He steps into the shower.

His skin reddens instantly, but he remains. He fights the want to scream.

The Mission of St. Jude’s fills his mind like the steam that fills the bathroom. The stooped, shambling figures that come in off the street for a meal and a cot gather inside his skull. He ladles out their sustenance; he walks them to their beds.

He twists the knob, stopping the water. The pipes groan. He opens the bathroom door and stands in its frame as the steam billows out about him.

He wipes condensation from the bathroom mirror then manipulates the red tie into place while not looking anywhere else but into the eyes of his reflection.

They are black as coal.

He blinks and they are brown again.

The tie is knotted and he slides it up into place. His thin neck has a good inch of space between it and the collar around its circumference. He grabs his wallet off the nightstand along with his keys and takes his jacket off the hook on the front door and steps out into the stairwell. He’s down two flights when he realizes.

He curses then trots back up the two flights to his apartment and retrieves the bag, which is sitting just inside against the wall next to the door.

He trots back down.

His thick, straight black hair gets into his eyes; he brushes it aside. He reaches the bottom and pushes the bar down on the door that opens to the world. A sharp, chilly day greets him. The sky is the colour of cement, but alive. He walks towards the bus stop two blocks down. The backpack hangs by a strap from his shoulder. The air is brisk in his long, thin, sharp nose. He keeps his eyes down the block, focused on his destination. He doesn’t hear the dog barking somewhere, or the traffic; he doesn’t hear the helicopter hovering overhead, or the sirens.

He only hears his breath.

A block more to go.

Along the length of the sidewalk is a chain-link fence atop a crumbling cement base that stands a foot tall from the ground. Along the base of the fence the city’s homeless sleep.

He stares off to the end of the block where he can see the bus stop. A gust whips at his jacket and his red tie blows upward and back onto his shoulder. He pulls it forward, then smoothes it over his shirt. He turns his head toward the fence.

The gusts bring him her stink; his long razor of a nose wrinkles. He looks down the block to see his bus arrive.

He watches it stop.

He watches people file into it.

He watches it pull away.

He turns and walks towards the sleeping vagabond. She lies on her belly, inside a filthy sleeping bag. Her head is resting on her crossed forearms. Her hair is wild and long, matted and silver.

He stands over her, looking at her intensely. Wrinkles carved by time make a map of her travels through Dante’s imaginings. Her eyes are moving beneath her lids as if in dream. Grime is smeared all over her face. Her lips are cracked and smudged with dried blood.

The man kneels beside her.

He strokes her hair.

He looks down the block – another group has already gathered at the stop.

He looks back down.

Her eyes are open.

He turns and walks down the block to catch the next bus.

“Write the truest sentence that you know”—Hemingway

I endeavor to imbue these words into everything that I write. To cut to the center of a thing. I have written off and on my whole life. I was born abroad but live here in America now.

WHY WE CHOSE TO PUBLISH “Michael”:

This second piece by C. N. Perry follows the same terse style of “Violet”—yet with subtle differences. The voice is stronger, the writing is edgy, and the story is dotted with well-chosen similes and metaphors.

And the ending… is perfect.