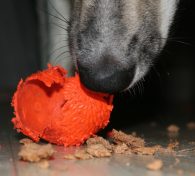 Stickball on a Brooklyn street was a game of skill. Don’t look at me like that. Unscrew your mother’s broomstick, wrap the grip with electrical tape, and let’s see you hit a wildly spinning spaldeen two sewers. Our playground was a canyon of parked two-toned cars, brown-brick apartment buildings, and asphalt-shingled row houses. Neighbors heard us on the street and dreaded the crash of a broken window. The old lady who poured a kettle of water on our chalk-marked skelzie box hovered behind a screened window like a gray ghost. The guy with the shiny maroon Buick who didn’t say hello to my father asked me not to hit his vehicle. My parents were worried that I’d shoot out from between parked cars chasing a ball and be hit by one of the speeders down our block. I was taught to look both ways before crossing even on our one-way street.

We played “automatics:” a ground ball not caught was a single, a hit beyond one sewer was a double, and two was a home run. A ball caught on the fly was out even if it bounced off a car.

It was my turn to bat, and I stood at the sewer home plate. Lenny Spazzolato pitched. Gene Kaplan was in the outfield and his younger brother, Carl, was backstop. My nickname for Lenny was Cousin Weak Eyes. His peepers bulged like a toad, but if I called him Frog Face, I would’ve had a fight on my hands. He didn’t like the Cousin-Weak-Eyes moniker, but it didn’t rise to an insult that demanded a punch in the mouth. Gene was Jewish and lived in the apartment house. He was a chunky, curly-haired redhead. His mother told my mother that her Gene was like “white bread.” I didn’t get it, but Gene was my best friend, probably because he emulated everything I did. Carl was dark, skinny, and a pain in the butt. I tolerated Carl as the toll for Gene’s company.

Lenny pitched a knuckle ball that looked like a half-moon in the air before it bounced. It was destined to squib and be impossible to hit, so I was happy to see the pink De Soto round the corner. I yelled, “Car,” and play was suspended.

We squeezed aside as the De Soto rumbled toward us. The tires screeched and I jumped. A man with a three-day beard rolled the window down and stuck his head out like a turtle. “You want a dog?”

The black snout of a camel-faced animal with brown bushy eyebrows popped out next to the man’s head.

My parents had cautioned me to be wary of strangers beckoning me from stopped cars. I took a half-step away. “Why?”

“I’m taking him to the pound. They’ll put him down.”

“Faccia Brutta. You want him or not?”

I’d pressed my parents for a dog. My father had given my mother a wink and countered that a baby sister would be better. Christmas was six months away. The dog panted, red tongue lolling. He smiled at me, and I made an executive decision.

The man tipped the bench seat forward, and the dog jumped from the back to freedom. He slammed the door and took off. The gangly dog jumped up on me, pressed his paws against my chest, and I was pinned on a hood. His breath was hot, and his yellow-brown eyes seemed to say, “Guess which one of us is in charge?”

Lenny had hands on hips. “Why is he your dog?”

I peeled the paws off my chest and the dog sat. “Because the man asked me.”

Lenny reached out to pet the animal and the dog growled.

Gene and Carl neared. Carl picked his nose. Gene was wide-eyed. “What are you gonna call him?”

Georgie had a leather collar. I found a piece of rope and attached it as a leash. I pulled, but his nails gripped the ground. It took all my strength to move him a few feet. “Come on, you need to meet my mother.” The plea had zero impact on cooperation. “Are you hungry? Want to eat?” Georgie’s yellow eyes brightened and he came along.

Georgie and I walked into the kitchen. We had a white fridge, a bread box, and a brown, patterned metal-topped table we ate most meals around. My mother was a slim brunette, and today she had on a blue print dress. She was washing dishes. She saw Georgie and screamed. “Madonna mia, what a beast. Get him out of my house.”

“You said I could have a dog.”

“Mama, the man was gonna put him to sleep.”

She made a chopping motion with an open palm. “Wait until your father gets home.”

Georgie crawled on his belly to my mother. She was cornered. He licked her feet. He rolled on his back with all fours in the air, imploring, and my mother’s face softened.

I puffed out a sigh of relief. “He’s hungry.”

“How about the leftover rigatoni?”

My mother had an old plastic bowl. The pasta was cold from the fridge. Georgie’s nose pushed the bowl around the floor as he ate. He scarfed up rigatoni like it was sirloin.

My mother crossed her arms. “He stinks. Give him a bath.”

Georgie was a model citizen while within the sight of my mother, and I led him out of the kitchen. She said to my back, “He’s your dog. You need to take care of him. Keep him out of my vegetable garden, or I’ll shoot him myself.”

I got Georgie into the tub and turned on the tap. Georgie took my arm in his jaws and his eyes said, “We’re not going to hurt each other, are we?”

Water splashed everywhere. Georgie looked like a drowned wildebeest. I used every bath towel to dry him and sop up puddles on the floor. He left a ring around the tub like an oil slick.

That evening when my father came home, Georgie jumped on him, and my father’s back hit the door. “What the hell?”

“Mama said I could keep him.”

“The Hound of the Baskervilles?”

I pulled Georgie off my father.

He shouted toward the kitchen where my mother prepared dinner. “Carmella, you told Anthony he could keep this mongrel dog?”

My mother knew better than to answer.

I had Georgie in a headlock and held him with every fiber in my body. “He’ll be good. I promise.”

My father reached the kitchen. “Carmella, the dog?”

She stirred a pot. The kitchen smelled of roasted meat and sautéed garlic. “Taking care of a dog will teach Anthony some responsibility. He’ll guard the house. Maybe you could turn him into a hunting dog.”

“Hunt what? Elephants?” My father kissed her cheek with a look of extreme dubiousness.

That night, Georgie snuck out of my room. In the morning, my father found him as he was leaving for work. The dog had gnawed the pedestal on the banister down to raw wood.

I jumped out of bed and sped down the stairs.

My father was red-faced. “I’m taking this mutt to the pound.”

My mother huffed when she saw the tooth marks. “We can’t keep him if he ruins things.”

“It was my fault that he got out. It won’t happen again.”

My father looked at his watch. “We’ll talk when I get home tonight. I’ll expect you to make this look like new.”

I dragged Georgie into the garage to retrieve the sandpaper, wood filler and stain. His face had the look of a penitent. “Georgie, you’ve got to behave or my father will take you to the pound.” The dog looked into my eyes like he understood. Nonetheless, I kept watch on him as I made repairs.

I finished just before my father got home. My mother saw the work and nodded. “Good.” She looked around. “Where’s Georgie?”

The front door opened and my father walked in. We heard a bark from upstairs. The three of us rushed to my parents’ bedroom. Somehow, Georgie had opened my mother’s armoire where she kept her lingerie. He had a panty in his mouth and a bra on his head. She screamed.

My father grabbed his head. “That’s it. He goes to the pound.”

Georgie almost knocked my father over as he ran from the room.

“Anthony, I’m sorry, but we can’t have an animal that causes damage.”

Tears came to my eyes. It wasn’t fair. He was my dog. I sped down the stairs and threw open the front door. “Come on, Georgie.” We ran down the stoop and into the street.

The Impala driver slammed his brakes. Tires screeched. I froze, and everything went into slow motion. Georgie barked viciously and jumped in front of the oncoming car. The Chevy swerved, but the bumper caught Georgie and threw him twenty feet. The fender smacked me a glancing blow, and I slammed into a parked car. I crumpled to the asphalt, unconscious.

I awoke in my bedroom. Dr. Sprandio bent over me. He’d delivered me and lived close by. He was heavyset with thinning hair and cool hands. His brow was deeply furrowed. “He’s awake.”

My parents stood behind him with red-rimmed eyes. My mother sobbed. “Thank God.”

Sprandio stood. “When the ambulance comes, I’ll take him to the hospital and check for a concussion.”

My father slipped out of the room and returned, cradling Georgie like a baby hippo in his arms.

My father’s face was sad. “Georgie’s been hurt badly.”

My father sighed. “I’ll take him to the vet.” His eyes met my mother’s.

She caressed my forehead. “Anthony, we may need to put Georgie to sleep.”

The solid smack of bat on ball never lost its thrill. I’d timed Lenny’s pitch, pulling a line-drive over Gene’s head that rattled in the branches of a maple tree. We didn’t see the ball come down.

Carl said, “If we don’t find the ball, Anthony, you’re out.”

As we searched near the parked, maroon Buick, we spotted Georgie sitting on the sidewalk, his smile curled around the ball in his mouth. The look in his eyes said “Now, we’ll play my game.” He took off.

Even after his injury, Georgie could pivot on three good legs.

As we chased Georgie, Lenny shouted, “If his teeth ruin my spaldeen, you’re paying.”

Heck, I thought, I could always get another ball.

Joe Giordano was born in Brooklyn. He and his wife, Jane, have lived in Greece, Brazil, Belgium and the Netherlands. They now live in Texas with their Shih Tzu, Sophia.

Joe’s stories have appeared in more than one-hundred magazines including The Monarch Review, The Saturday Evening Post, decomP, The Summerset Review, and Shenandoah. His novel, Birds of Passage, An Italian Immigrant Coming of Age Story, was published by Harvard Square Editions, October 2015. His second novel, Appointment with ISIL, an Anthony Provati Thriller was published by HSE, June 2017. Read the first chapters and sign up for his blog at www.joe-giordano.com/

WHY WE CHOSE TO PUBLISH “Mongrel Dog”

In his heartwarming tale, “Mongrel Dog,” author Joe Giordano takes us back to innocent times and childhood memories, and we’re sure many of our readers will be able to identify with it.