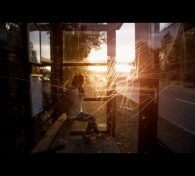 I carry a briefcase when I leave for class, dressed in platform shoes, coke-bottle glasses, and bright tinny braces. It was my uniform, though I’d not learned of uniforms yet.
(nerd: noun – A person considered to be socially awkward, boring, unstylish.)

I wake at six in the cold dawn light. I say goodbye to my dad as he rushes out the door. He won’t be back ’til nine.
(work-a-hol-ic: noun – A person who works compulsively at the expense of other pursuits.)

I walk to the bus stop because Mom isn’t awake. She says the bus is fine, that I’ll be fine, nothing to worry about, just sit close to the driver and yell if anything happens.
(al-co-hol-ic: noun – A person addicted to alcohol or alcoholic drinks.)

I sit on display as traffic speeds past, in the tiny glass box of the bus stop.
(self-conscious: adj. – Excessively aware of being observed by others.)

I check my Casio when the bus finally arrives. I time my wait to the second.
(ob-ses-sive: noun – A person who thinks or behaves in an obsessive manner)

I take the same seat as always, not behind the driver, like Mom says, but a seat in the middle, by the door, a spot where I can see.
(hab-it: noun – A behavior regularly followed until it becomes almost involuntary)

I hold my breath three stops later, because of the smell. She arrives after the woman with the bright, white shoes, and the man with ebony skin, and the grease-stained nails. She shuffles aboard with her dirty cloth bag stuffed to overflowing. Her gray hair lies in clumps about her shoulders.
(home-less: noun – A person who lacks permanent housing and lives on the streets.)

I pretend to watch my feet or stare out the window. I steal glances as we go. Her skin has an odd tint, and I wonder where she lives. Mom tells me: “Don’t get too close.”
(cur-i-ous: adj. – Eager to know or learn; inquisitive.)

I watch her at the farebox, quarters in her hand. Her face is pale today in the bright December light. Her quarters spill down the stairs as she sinks slowly to the floor. The driver seems surprised.
(con-fu-sion: noun – The state of being bewildered or unclear)

I see the ambulance with its flashing red and blue lights, the men in crisp shirts who rush quickly aboard. She peers at me over the green oxygen mask. I see her chest rise, her blue eyes dilate. One says, “I don’t got a pulse.”
(fear: noun – A distressing emotion aroused by impending danger, evil, or pain)

I say I missed my bus when the headmaster asks why I’m late. It’s easier than the truth.
(lie: noun – A false statement made with the deliberate intent to deceive)

AUTHOR BIO:
Jeff is a dabbler in science fiction, horror, and other forms of the absurd. His work can be found in such venues as The Literary Hatchet, Tales to Terrify, J.J Outre Review, and Mystery Weekly, to name a few.

When not writing, Jeff and his dog, Edgar, can be found prowling the woods behind their rural home communing with the denizens of the night.

WHY WE CHOSE TO PUBLISH “Morning Commute”:

In just over 500 words, author Jeff Dosser starkly paints his story’s subject and his character’s perspective, while the accompanying definitions let the reader ponder those words in terms of personal experience. This interesting duality is what created a compelling piece for us.