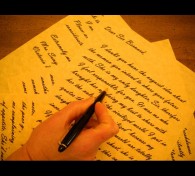 Any minute now, I expected that the man I was having dinner with would produce a letter typed on a sheet of yellow paper. I wasn’t too happy about it, yet I tried to enjoy my Hare with Chestnuts Parisian Style, sipping at my glass of fabulous Chardonnays d’Oc. The guy who had asked me out was quite attractive. His Chardonnay was excellent, his dark suit was immaculate, his eyes were interested in me, and his name was Bernard Fishgrund. He was the senior manager of the company that dealt in a wide range of French and German cosmetics of worldwide repute.

I ate half of my Hare Parisian Style, and the yellow letter I feared Bernard would at least start speaking about hadn’t become the topic of our conversation so far. This made me feel uneasy and alert.

The reason why that letter gave me cold feet was ludicrous. It was my mother. She was a woman of character. If the old fair lady had something on her mind, she was sure to get what she’d bargained for.

The usual turn the events took as they followed the plan my mother had drafted hit me hard. My admirer, i.e. the man expected to propose to me, at a certain point during dinner would produce a letter scrawled or typed on a yellow sheet of paper. That particular tinge of the yellow color gave me bitter headaches. It exuded smells of the drawer in which my mother stored her cosmetics. I had the feeling that that the paper had absorbed the memories of her wrinkles she had concealed under thick layers of rouge. To put it mildly, the yellow paper smelled of problems that Mother hoped cosmetics could resolve. So when my prospective husband asked, “What is this?” showing me the yellow letter, I sensed the battle would be lost.

The yellow document was the letter in which Mrs. Dubois, i.e. my mother, had thrown light upon the some remarkable facts. The epistle read:

I doubt you have the vaguest idea about the woman you intend to share your future with. She is my only daughter, Sir, therefore I feel responsible for you. It was me who brought her up doing my best to share with her the values of the civilized world. I put in quotes the adjective “civilized” because my daughter and the civilized world are totally incompatible entities. In short, she is a liar. If she says she loves you this can only be a proof that you, Sir, are a very rich man. She is after your money, believe me.

She is bound to squander all your assets, i.e. all your hard-earned money, Sir. She will make you a beggar before you could say Jack Robinson. In short, my daughter is a spendthrift. I’ll reiterate that statement in clear conscience in any court of law as the case may be.

I’d like to add she has lax morals. I’ve written those bitter words feeling utmost pain. You can understand that, I am her mother. I think I know what will happen to you, I have already lived through similar circumstances several times. Two other men before you, Sir, were credulous enough to welcome her in their lives. Soon after that the poor guys, God bless their souls, came to me complaining of acute insomnia and lack of appetite. She’d cuckolded them. Her ex-boyfriends faced nervous breakdowns. I, being a sensitive woman, suffered silently and lived in constant dread of my high blood pressure. Therefore, I ask you to put an end to your relationship with my daughter. If you do not listen to me, you are sure to land in a psychiatric ward, and I, on my part, might meet my Maker as a result of being hypertonic. Alas, unfaithfulness is as indispensable to my daughter as is water to a fish.

At the end of the first month of your marriage, she will have fallen in love with another man. You are a sensitive guy—I can somehow feel that. Therefore, Sir, do not come near her if your future means something to you. Run for dear life while you are still able to wrench yourself from her grip.

I wish you good luck with all my heart. Please accept the assurances of my highest consideration.

Extremely worried about you,

…At that point, the guy who had already bought an engagement ring for me would stare at the yellow letter, rendered speechless.

More often than not, my prospective husbands asked me to a romantic candlelit dinner, the usual eight candles burning mystically, Vivaldi’s “Spring” a magic in the air. However, after the young man perused my mother’s epistle, his face would grow thin and long.

After my first boyfriend read the yellow letter, he looked at me, gasping in astonishment. His mother came to check what the matter was and in no time there were tears in her eyes. She pleaded with me to go away on my own accord. The poor woman hailed a taxi for me and sent me packing while my boyfriend sighed at the window looking pitiful as I got into the taxi. The father of my second boyfriend acted in a stunning way. His son had received my mother’s letter, too. The text was identical, and it was only the date that was different. The father adopting a businesslike approach informed me, “I make much more money than Marko (the son). I’ve been looking for a woman like you.” Those words made the son start sobbing.

After that sad event I made a pledge I’d have nothing to do with men who sobbed. So far, I had been as good as my word.

…So far, Bernard Fishgrund, the senior manager, had produced no yellow letter, and that fact, instead of pacifying my troubled thoughts, made me choke on my Hare with Chestnuts Parisian Style. It sounded highly improbable that Mother had let my present admirer slip from her eagle’s eye unobserved.

The yellow smell of an old drawer seemed to hover in the air above my head. Bernard smiled at me, the candles burned romantically, Vivaldi’s “Spring” was again a magic in the air, yet I suspected a trap.

“Your mother is a marvelous woman,” said the man I hoped against hope to grow old with.

Two weeks ago, Mother dropped insightful hints that I’d die all alone, an author of best-selling memoirs replete with red hot love affairs. I didn’t like that. Finally, Bernard Fishgrund produced the yellow letter. The moment of truth had come.

This time, Mother had written the following:

You are a fortunate man: you have met my daughter, a magnificent woman. I brought her up and I am proud of her. She is my creation, a flawless creation, Sir.

Victoria would never lie to anyone even if her life depended on that. If she says she loves you it means that you are the love of her life and you will be the love of her life until she breathes her last. Loyalty is her most characteristic feature. Money is not of primary importance to her, but this statement should not be misunderstood: she is not a squanderer. On the contrary, Sir! Victoria is the thriftiest young lady I know.

She will successfully accompany you along the way to stable financial prosperity.

My daughter’s love for you will be the safe haven for all your undertakings. It is the thought of the harmony between you two that stabilizes my dangerously fluctuating blood pressure.

I feel that she can make you very happy.

Please, accept the assurances of my highest consideration.

Thank you for sending me the high precision Japanese blood pressure/pulse measurement device “Kyoto” you and I talked about last month. I received it yesterday. Now I feel healthy, energetic, and able to control my blood pressure under most untoward circumstances.

I simply adore the anti-cellulite apparatus you sent me for St. Valentine’s Day! Could you believe the miraculous thing eliminated the abominable freckles on my hands that old age had given me? You have no idea how young I feel!

I was enchanted when yesterday you told me about the fibrinogen evaporator that can delete wrinkles for good.

You are a serious scientist. I am proud of you!

I was born in Bulgaria where I work as a literary translator from English, German and French.

My latest short story collection “Carts and Other Stories” was published by Fomite Publishing, Vermont, USA, 2012.

WHY WE CHOSE TO PUBLISH “Mother’s Epistles”

We loved the European charm and voice of this piece, to say nothing of the talented author’s excellent writing. It pleases us when we can publish works from authors whose native language is not English because of the varied perspective they provide. We certainly hope we can publish more from Zdravka Evtimova in the future.