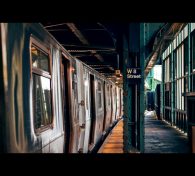 The audition should have been a formality. A henchman role—one line, two minutes of screen time, and most of that out of focus. We’ll give you a call once we’ve decided, the casting director had said. Maybe Tom couldn’t portray emotions, but he could read them, and she had no intention of calling back.

How would Tom make it to Macbeth with the Royal Shakespeare if he couldn’t secure thug #3?

He squinted against the morning glare as he left the studio. Slipped on sunglasses and oriented himself: the Italian café and the wide blue tower were on the left, so the subway was to the right. Somewhere in Chinatown’s undeveloped backyard. He ducked under a tree planted mid-sidewalk, wove against suited businessmen and tired students and nervous upstarts, all of whom worked as hard as he but actually got something out of it.

He should have listened to his dad and become an accountant. It was too late now.

The walk signal disappeared as he reached the crossing. He stuck his hands in his blazer pockets, stared at his shoes, and listened to the whooshing of passing cars.

Tomorrow’s audition would only be harder. The character was a sociopath, a trauma-stricken Vietnam veteran, president of a circle of killers. It was for a long-form TV show, and he could make the character a regular if it went well.

The lights changed. Tom crossed, entered the station. The noise of traffic cut out and left only the echoes of his steps down the tiled cavern. He swiped his subway card, passed a ragged man sleeping with a cup, and started down the stairs. The escalator, as always, was blocked with do-not-cross tape.

“This will be your last mistake,” he said to himself. “If you knew who I was, you’d be washing my feet with your sweat.” He had the lines down but hadn’t decided how to say them. Is the character calm, cold? Is he a raging beast?

Tom strolled along the platform and checked the monitor across the gap. Eight minutes until the next train. A bald, goateed man in denim waited alone against the concrete wall.

“This will be your last mistake.” He muttered it with strength, eyebrows pressed down, but it failed, didn’t work. It sounded like acting. He tried again, robotic, civil. Passable but uninteresting. This role would bring competition, maybe even names he knew, and the performance needed to be unique. He tried it overblown, cracked, fiery, eccentric. He tried posture intimidating and invisible. Voices hard and meek.

Nothing worked. He rubbed his forehead and peered down the subway tunnel, where a distant light moved on some other line. He paced and dragged his feet.

It wasn’t enough to figure out the character; he had to practice his decision. He’d want weeks for that, but he had a day, and since he was nowhere close to deciding, he wasn’t sure how much of a day he had. At this point, it would be wise to move on to something else.

He put his finger through his key ring and spun the keys around.

“Hey, is this the red line?” The bald man came toward Tom, wiping a hand under his crooked nose.

“Going east. West is across the—”

The bald man gripped Tom’s shirt and pushed him to the platform’s edge, a switchblade in his free hand. “Let’s keep this brief. I’ve got your life, you’ve got my money. Give it over.”

Tom tried to blink away the panic. He stepped back, but the man pulled him forward.

Tom glanced back at the grimy channel through which a train would rush, the screen said, in two minutes. “You want money?”

“Sure you do. Look at those brogues. Look at that watch. A guy like you carries cash.”

Tom searched for help, but the platform was deserted. The keys rattled in his hand. “I’m telling you, those are all I’ve got. You want the shoes? They’re yours.”

“Don’t want the shoes. I want you to reach into your pocket and find a wallet.”

“I didn’t bring a wallet. All I have is a subway pass.”

The man shoved Tom forward until his heels peeked over the edge, and Tom grabbed his arm to stay up. The man held the knife under Tom’s nose. “Should I start counting down?”

Tom’s breaths came uneven, as if caught on something. He felt the knife slicing the bottom of his nose. His sunglasses fell into the pit, and the hanging incandescent lights forced his eyes shut.

When he opened them, his breath was still. He smirked. He laughed. A high cackling that bounced between the walls.

Tom licked his lips. “You don’t recognize me? You don’t know who I am?”

The man looked Tom over. “What?”

“You’ll know soon, and you’ll wish you had known. You’ll memorize me, see me in your dreams, plead to me in church.”

“What are you talking about?” He pushed the knife harder.

Tom kept from wincing. The man’s caution or curiosity alone kept him on the platform. How long would the attention last?

“Let me tell you a story,” Tom said. He put on an air of internal instability, of deep but restrained rage. “Overseas, my platoon was captured. The enemy captain, he looked something like you. Same hobby as you too. Slicing here and there. For fun. Three of my men died bleeding out from missing fingers and ears and chins before the captain’s pen knife went missing. So next time he brought scissors instead. And just before I lost my pinky, the pen knife found its way into his spine.” Tom inhaled as if smelling fresh bread. “I killed every guard before I left.”

The man withdrew his blade and pointed it at Tom’s chest. “Listen, if you think—”

“Imagine you found a way to kill me.” With every sentence Tom pushed the madness closer to the surface. “Imagine, even, that I don’t shoot you from inside that ditch. Then this city will not be safe for you. In no more than ten hours you will face one of my friends. And they don’t give warnings, and they don’t kill gently.”

The man opened his mouth, looked around. “I don’t want trouble, man. I just want your money.”

The ground vibrated. Roaring from the tunnels.

“You’re done now.” Tom’s face trembled and he spread his arms. He was a priest of wrath, an angel of death. “This will be your last mistake. I’ve played along, and were I anyone else, I might be nervous, but I’m not anyone else, I am bloody me, and if you knew what that meant, you would this instant be washing my feet with your sweat.”

The man worked his jaw, shook his head in bemusement.

Tom switched to a calm smile and reached around and pressed a key against the man’s spine. “Can you feel that?”

The man sprinted to the exit. Tom stepped forward and felt wind on his back as the train arrived. He entered an empty car, panted, and laughed.

A priest of wrath. Not bad.

Ben Labelle is an engineering student and writer (apparently) from Montreal. His fiction interests range from ideologically driven serial killers to magic-driven empires, and his non-fiction interests from aether theories of light propagation to Platonic theories of universals.

WHY WE CHOSE TO PUBLISH “Mugging”:

Author Ben LaBelle gives us a strong and amusing opening that sets up the character and his situation. We loved that second paragraph: “How would Tom make it to Macbeth with the Royal Shakespeare if he couldn’t secure thug #3?”

Then a nice follow-up comes two paragraphs later: “He should have listened to his dad and become an accountant. It was too late now.” This has the reader intrigued as to where the story is going because the title has already posed an interesting story question. (It’s great when titles and openings work together to set up the story.)

So, with the setup complete, we know what Tom wants and we see his mental conflict. We next see a physical conflict leading to an unexpected resolution that caps the piece—a perfect ending to a tight and well-composed story.

A SONATINA IN F MAJOR by Zoë Sutton Harris

MY BROTHER, THE POMEGRANATE TREE by Jonathan Phillips