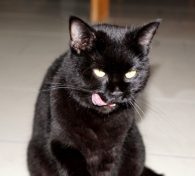 Day 32: I’ve tried countless times to eliminate this rat bastard. Poison, throwing a toaster in his bath, running into the street for him to rescue me in the hope he gets mutilated by being smashed with a two-ton car. I even put a poisonous spider in his shoe. Between executing these plans and leafing through his journal, I realize he suspects someone is after him. He’s right.

Day 33: That damn dog won’t shut up. It’s almost like he’s taunting me. I’ve tried everything possible to dispose of him. I don’t hate him as much as my owner (whose name I don’t even know because I’ve never heard anyone talk to him). This canine adds to the hell which is my life. My owner gives him wet food every day. He obviously loves him more, but that’s fine because I don’t love him very much either.

Day 34: All right, well I got somewhere. The dog took the bait and went into the bear trap this time, couldn’t resist some good kibble. My owner thinks this was a “message” from his stalker; at least that’s what he said in his journal. There’s a bunch of good stuff in that journal, not enough about me, but an abundance about his girlfriend. I never understood that about humans. Why do they need girlfriends? Is it to mate, or maybe he just wants companionship. He is pretty lonely after all. It’s weird, but I’ve never seen her. She’s never come by his house. I can’t blame her. I mean this whole place is a hellhole. Even so, he always visits her.

Day 35: Okay I just realized that I haven’t explained why I’m trying to kill the poor bastard. You see, he has this wet cat food that he keeps in a can, and this is the good stuff, but he only gives me ONE CAN A WEEK. It’s like torture. I have to wait seven long days. The rest of the week I have to eat this repulsive dry kibble. It gets stuck in my mouth and I choke on it. My owner doesn’t pay attention to these near fatal episodes.

Day 36: He split up with her today, or at least that’s what he says in his journal, but I’m pretty certain that she broke up with him. She declared he was too paranoid. Honestly I kind of doubted if she was real. I mean, who would want to sleep with him? He doesn’t assume it’s Jake anymore and now suspects his ex-girlfriend, Becky. I don’t know why he didn’t consider her sooner. She was consistently a crazy witch and even said she would kill him for breaking up with her. I have no idea why he dated her.

Day 37: He’s moving, far away. Thankfully, he’s taking me with him, so I can continue my work. I never liked this house anyway. It always smelled like cheese.

Day 38: The new home is way better than the old one. It’s bigger, fancier, and even has two bathrooms. I don’t see why it does; it’s not like he lives with anybody else besides me. For me the best part of the house is the basement. Here’s my plan: I’m going to lie down on one step, have him step on me, freak out, and then trip him. My fur is black and white, so it should blend in with the dark. Just in case he doesn’t die from the fall, I added some razor blades and rusty nails on the stairs. Additionally, I’ve placed another bear trap at the bottom of the stairs. I don’t know why he has so many bear traps, probably because of his “hunting career,” which he totally made up to sound cool. God, he’s pathetic.

Day 39: It worked! The only thing that didn’t work as planned was that he didn’t die instantly. His head smashed into the bear trap. I heard it crunch. It caused the same noise as when his dog’s neck snapped. The sound was oddly satisfying. I sat on his chest and slowly scratched him with pleasure. His last words were, “It was you.” I curled up in a ball and began to purr with contentment. I’ll update this tomorrow while I’m feasting.

Day 40: NOOOOOOOOOOO! Why didn’t I think of this sooner? I can’t open the cans because I don’t have THUMBS! HOW AM I SUPPOSED TO USE A CAN OPENER WITHOUT THUMBS!?

WHY WE CHOSE TO PUBLISH “Nobody Suspects the Cat”:

Anyone who has owned a cat knows that they find ways to get what they want, and they can be vindictive when they don’t get it. Author Dylan Kollus’s highly amusing and well-wrought piece from the cat’s viewpoint imagines a feline more divisive than we would ever suspect.

Moral of the story: Don’t piss off the cat!

One comment on “NOBODY SUSPECTS THE CAT by Dylan Kollus”