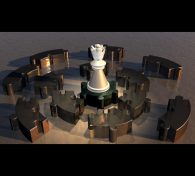 In a rare idle hour, I watched the two ancient-looking men play chess. The Parks Department had installed several granite tables, each incised with a chessboard and flanked by two concrete benches and enough space for kibitzers. Players needed only bring their own pieces. At one table, the two men sat.

It was such fine weather—bright sunshine, clean-smelling air, sounds of breezes ruffling the nearby trees—that many people were in the park, playing checkers or chess or backgammon, jogging, or just sitting. Something about these two men was different.

After maybe ten minutes of watching, I noticed one thing. They were not playing chess at all. My chess is beginner-level at best, but I know how the pieces move. The men concentrated, exchanged a few words between moves, sometimes took a piece from the board, but their moves were random.

I thought they were just too senile to know what they were doing, so I hesitated to move closer. Finally, I did anyway. Within earshot, I discovered that, if their moves were random, their words were clear and focused.

The first ones I made out plainly were, “The doors into the movie theater were directly under the screen.” The speaker moved one of his bishops, not, as always in chess, along a diagonal.

The other man responded, “The Florey Theater, named for an early real estate developer.” He took one of his knights, not in the path of the bishop, from the board and set it aside. “Good one.”

Errant-bishop smiled. After a minute’s thought, One-knight ventured, “Free parking lot off a one-lane, one-way street that nobody knew about.” Less than confidently, he pushed a pawn forward.

The other man sat expressionless, then said, “Don’t know that one.” He did not remove a piece. A strange look crossed his face. Looking over One-knight’s right shoulder as I was, I saw it clearly but couldn’t read it.

One-knight could. Without warning, he turned straight toward me. I expected, “Go away and leave us alone.” Instead, a smile worthy of the sunny day came to his face. “Wanna play, Sonny?”

I recovered before they lost interest in me. “I must decline your offer, sir, because I can’t figure out what you’re playing.”

“This is my long-time friend, Ed. He’ll explain the game to you.”

I shook Ed-of-the-errant-bishop’s hand too.

“Memory. The game’s memory. We made it up. We take turns saying something we think we’ll both recognize, but not things we did together. When we’re done for the day, we decide a winner. Best memory wins.” Seeing me glance at the table, he added, “Chessboard’s just something to do with our hands.”

“What if you don’t agree who won?”

Sam answered. “Then we have two almost equally great memories to share.”

Pressed for time, as always, I excused myself with, “Well, thank you for sharing this with me. I hope the rest of your day is as fine as the weather, and I hope I haven’t disturbed you.”

“We appreciate your curiosity, Chris. When most people see we’re not playing chess, they just assume we’re crazy and back away.”

At dusk, I thought of them sitting in the glow of their lives and wondered how long till darkness overtook them.

That was fifty years ago. Time long since took them, as time does.

Players bring their own boards now. The tables are gone, but the park is still here. I stalk its pavements with my chess set. When I see someone who might recall that long-ago time, I say something, try to trigger a memory.

I know I’ll succeed someday, find him or her, the person I can play not-chess with.

Gordon Cash is a lifelong professional scientist. He lives in Annapolis, Maryland, with his wife and their six cats.

WHY WE CHOSE TO PUBLISH “Not Chess”:

It’s different, and it strikes a chord with the reader, which is exactly what we look for in a story. “Not Chess” reminds us that our life is a journey and that our memories recall that journey.

2 comments on “NOT CHESS by Gordon Cash”