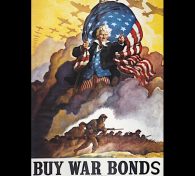 “Which would you rather have?” asked Sondra as she adjusted the World War II blackout shade in her upstairs bedroom.

“I don’t know,” replied Beverly. “Can’t we play another game?”

“I like this one, and you’re in my house so we do what I like.” Sondra whined as she spoke. “If you’ve a better game, let me know right now!” She moved around the room, lifted a Victory Bond Drive pamphlet she’d gotten at school, then dropped it back on her maple dresser’s top.

“Okay,” began Beverly, “I’d rather have cancer than polio ’cause at least I’d be dead instead of a cripple.”

“What were other reasons your friends gave?” asked Beverly.

“Well, most didn’t want to be in an iron lung and just stare at their faces in mirrors for the rest of their lives. How do you think someone in an iron lung goes to the bathroom?” The question was asked sincerely yet with a giggle.

“Gee.” Beverly looked perplexed. “I never thought about it. They must go to the bathroom, but I can’t imagine how.”

“It’ll be your job to find out and then report back to me. Sarah is going to find out about the lady who had a baby in one. If she’s paralyzed, how’d the baby even grow,” Sondra wondered. “Or, how’d she become pregnant in the first place… unless she was pregnant before she got polio.”

“I don’t want to find out,” Beverly spoke quietly. “I hope I never know about polio. My mom won’t let me go to the movies or to the beach when it’s crowded; she even asked me not to play with anyone who has a cold.”

“So sneak to the movies!” Sondra stated. “I always do! My mom thinks I play with you on Saturday mornings, but I go right to the movies. Oh, I’m never going to get anything so awful as polio, and young kids don’t get cancer anyway. Why should I be scared of everything every summer when it’s my only long school vacation?”

“I can’t,” Beverly whispered. “I am scared. I just couldn’t disobey my parents either. They’ve enough to worry about what with Uncle Phil in Japan and Uncle Lou in Belgium.”

“Oh, you’re so serious,” sneered Sondra. “Why even this war is kind of fun. ’Course I miss not having Dubble-Bubble Gum, but it sure was great getting out of school for all those air raid drills. Even the ones we stayed in school for were great. Our class’d sit in the hall with our heads between our legs and one boy would always make the sound of an airplane and spook the teacher.”

“Suppose it had been a bomber?” asked Beverly.

“Suppose anything.” Sondra stated sharply. “Gosh, you’re the prophet of gloom all the time. Didn’t you feel you were out of a movie getting fingerprinted? I’ll bet only New York City kids got fingerprinted because we’re so important.”

“You got fingerprinted ’cause if a bomb fell, it’d be here, and maybe all left of you would be a finger for identification.” Beverly didn’t want to continue the conversation and began to show restlessness. She remembered the fingerprinting was done at the candy store near school; she’d never liked going back there since standing in front of a bruised wood table filling out an Emergency War ID Card, then pressing digits down on an ink pad.

“You’re wrong, you’re wrong,” screamed Sondra. “See,” she pulled out a plastic disc worn around her neck on a plastic cord. “Every child in New York has to wear these at all times. It’s got my name and a number just like a real dog tag. If I died, this would tell ’em who I was.”

“What if your head was shot off? Look,” she pleaded, “please let’s not talk about this anymore. It always happens when you play Rather. It scares me. My dad is a street warden for air raids, and I sit in the blackness and worry about him out there on the street alone during these practice raids.”

“Oh, worry. My mom rivets in the factory and am I ever glad she’s not around to say `You’re too young for make-up’, `Stay out of crowds’, `Nice girls don’t stuff their bras’, and all that crap.” Sondra went on, “If she had her way, I’d still be in undershirts with sleeves, and woolies.”

“Sure she loves me,” Sondra snapped. “That’s what makes defying her all the more fun. Boy, I’m glad I’m not you.”

“If you knew you were going to die tomorrow, what would you have to do tonight?” Sondra asked brightly. She had her own answer ready.

“Here we go again. This is just another form of Rather.” Beverly sighed.

“I don’t know!” Beverly was impatient. “I just haven’t thought about it. I’d probably spend tonight just like any other night, listening to the radio, so I wouldn’t have to think about dying.”

“I’d,” began Sondra, “lose my virginity. I don’t want to die before I know what IT’s like. At the class dance, when Michael and I did a dip, I felt his thing, hard, against my leg. It was exciting and felt so, well, so hard.” She said the last word excitedly.

“See,” Beverly was embarrassed, “it is Rather. Which would I rather die, as a virgin or a non-virgin.”

“I guess I’d rather have a baby before I die and know what it is like to carry one around inside me.” Beverly waited for her friend to laugh.

“What does having a baby got to do with losing your virginity? It takes nine months for that, and you’ve only tonight left to live.” Sondra’s impatience showed.

“You should be married before you go all-the-way. No one wants used merchandise.” Beverly was quoting her parents.

“No one wants a corpse,” Sondra said sarcastically. “Look, you’ll be dead tomorrow. There is only tonight. Do you want to be buried without ever, ever having had a boy all over you? Would you want to die without having experienced the ultimate?”

“What if you got pregnant?” asked Beverly.

“Lord, Lord,” Sondra was exasperated, “it’s just a game question. If I got pregnant, no one would know as I’d be dead a few hours afterwards. I wouldn’t be branded with the scarlet letter, and if an autopsy was done, my mother would think I broke the hymen on a horse.”

“Would you pick just any boy?” asked Beverly.

“Well,” smiled Sondra, “Michael’s felt mmm while dancing, so I know he’s got a big enough one to feel good. All the magazines I sneak in talk about the big ones being really great feeling.”

“So you’d call up Michael and say `Look, Michael, I plan to be dead tomorrow and want you to come over here tonight and stick your thing up me so I won’t die a virgin.’”

“I’m sorry,” Beverly said gently, “I didn’t mean for us to have words. I’m just not ready for sex or death or polio or cancer or choices. I really just want to grow up.”

“But you may not.” Sondra was calm now. She barely whispered.

“You really are scared too!” Beverly said with wonderment. She had never realized that her friend’s casual behavior was a cover-up. The recognition was almost frightening. She really needed Sondra for balance, have her make fun of the reality of war and disease and restraint. What would they have together if Sondra showed herself to be really a frightened Beverly in disguise?

The all-clear siren could be heard in the distance. Beverly lifted the black-out shade in her friend’s room and looked into the deserted street.

“I have to go now. My mom’ll be worried. See you tomorrow,” Beverly spoke briskly. She got up from the section of Sondra’s bed where she’d been sitting and noticed her blue wool skirt was covered with chenille lint.

“Sure,” snapped Sondra. She then reverted to her giggling and reminded her friend, “Don’t forget, you’re assigned to find out how one pees in a lung.”

Lois Greene Stone, writer and poet, has been syndicated worldwide. Poetry and personal essays have been included in hard and softcover book anthologies. Collections of her personal items/photos/memorabilia are in major museums including twelve different divisions of The Smithsonian. The Smithsonian selected her photo to represent all teens from the 1940s–’50s.

WHY WE CHOSE TO PUBLISH “Of what else have young ladies to think, but husbands”:

We love stories that take us back to an earlier time in history and bring back those days to those who remember it as well as to those too young to have been participants in those times. Lois Greene Stone’s story takes us to a time of uncertainty when lives were less complicated—yet still conflicted—and young girls’ lives weren’t all that different from those today.

BEEN THERE, DONE THAT by Steve DuBois

“OF WHAT ELSE HAVE YOUNG LADIES TO THINK, BUT HUSBANDS” by Lois Greene Stone

CLARION OF THE DEAD by Sophie Jupillat Posey

THE CHOICE by Mike Murphy

THE EMISSARIES by Shannon Carpenter