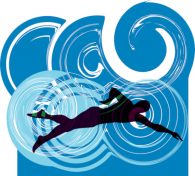 The day that kid came from Toronto was my chance to be a hero. All I had to do was hold my breath. He was older than we were—nineteen maybe—brush cut, blond hair, thin as a rail, with oily skin and sunburned ears. After watching us splash in the canal, he called us over. Said he held the record for longest underwater swim. Claimed to be training for the Olympics.

“You guys must spend every day swimming. Right? Tell you what, put some money together and find me your best swimmer. Whatever you raise, I’ll double it if he stays under longer than me.”

The 1952 Olympics took place the previous summer. We didn’t recall any underwater events. Taking him for a shyster, who supported himself betting against kids, nine friends and I accepted the bet. He had no idea who he was dealing with.

Everyone in town knew how long I could hold my breath. We played water tag and you could only be “tagged” on the surface, so no one caught me. I’d dive beside a tied-up steamer and disappear. My kicking feet, pushing me deeper, were the last thing anybody saw. Great Lake freighters had flat bottoms, nowhere to surface for sixty feet or more. I was the only one who could swim beneath one. No one else even tried.

It was rare to have more than a dime in our pockets, but the world record holder waited, sitting on the sidewalk, reading Life magazine, while we raided our piggy banks. Somehow, ten of us scraped together five dollars. That was a lot of money. I mean, a lot. A kid could eat all day in a candy store without spending that much—and this guy wanted to double it.

The Olympic contender had five singles and asked who would hold the cash, “the bounty” he called it. Someone pointed to Bertie Nicholson, son of a cop—became one himself in 1961. You should’ve seen the look on his face, being handed all that money. Maybe more than he’d ever held before.

Third Ferry was the starting point, where steps lead to the water, dating from when there used to be a pedestrian ferry. Everywhere else, the sides of the canal were six feet high.

The national champion said he’d go first. Took off his shoes and shirt and set them beneath a folded towel. None of us carried towels.

The water color mesmerized him. “I can’t tell if it’s blue or green. Never seen anything like it.” Looking toward Lake Erie, he asked how far it was, as though he could make it there.

“More than half a mile,” my friend Monty said. Monty Donlevy. His dad was a cook in the nickel plant cafeteria.

The world record holder had a warm-up routine. He touched his toes, ran on the spot, and did ten push-ups before getting wet. Climbing in, he held on to the last step, where the water dropped off, stuck his face under, and stretched out near the surface. He lifted his legs above the water, backwards, one at a time, three times each. He probably thought the routine would intimidate us, but it was funny. Tiring himself out for nothing. What good would splashing his legs do?

Next, he sat on the bottom step, sucking air like a vacuum and exhaling. Holding the last breath, he slipped in and swam an arm’s length from the side, two feet down, where we could see him through murky water. We followed atop the concrete wall, talking about what we’d spend our winnings on. Not for a second did any of us believe we could lose.

Maybe three hundred feet from Third Ferry, the waterway shifted a few degrees west, where an extension had been built. A four-inch crack went all the way to the bottom. Vegetation grew from it and carp always fed there.

I could make it past this spot, no trouble—Monty and I figured that out two summers earlier, when he bet a nickel I couldn’t do it. He never paid. My guess was the national champion would come up short. Don’t know how I knew, but I was right. He didn’t get near enough to scare the fish away.

Coming up with a gasp, sucking air like he had at the start, he surveyed the distance he’d covered and nodded with pride. Looking up, he asked, “What do you boys think about that?” Though trying to sound like some big shot show-off, his face was purple. It looked like he was going to puke.

Everyone jumped in and swam with him back to Third Ferry. He kept asking if we’d ever seen anyone swim so far underwater. Monty lied and said no. He didn’t want him backing out of the bet, so Monty said the whole gang was worried about losing.

Climbing out, the swimmer asked who his opponent would be. “Or doesn’t anyone think they can beat me?”

Without a word, I dove back in. He hadn’t even picked up his towel yet. I stayed deep and swam for the center. To let everyone know where I was—and make them nervous about wasting air—I made fun of the Olympic contender’s routine. Like him, I lifted my legs above the surface, backwards, one at a time, keeping my face under. Then I lowered my head till I was upside down, with my legs sticking out, scissoring the air. It was about as useful an exercise as anything the other guy did.

Still on the same breath, without ever lifting my head above water, I kicked and swam for Lake Erie, hoping I hadn’t got turned around. If I headed the wrong direction, I’d probably never know till I came up. Not wanting them to see me from the surface, I stayed about ten feet down, the depth where I felt the slightest pressure in my ears. They’d double their money while I did all the work, so I wanted them to sweat a little.

I veered back to the canal wall. There are no markers down there. You can barely see past your fingertips. I had to find that crack in the wall to learn where I was. I kept going and going. When I spotted the dark line with moss growing from it, I shooed the fish away and wanted to laugh. I knew I’d won, but I was just getting started.

Monty told me later he kept assuring the world record holder I was all right.

“Any human being would’ve drowned by now. You sure he ain’t trapped somewhere?”

My friends worried too. Course they did, with that much money on the line. They peered over the edge, dripping sweat into the water, wringing their hands. Monty knew to watch the carp. Several were near the surface. When they scattered, as others darted up from below, he told everyone where I was. The Olympic contender doubted and kept looking back, expecting to find me floating, facedown, in the middle of the channel.

I was still going. Monty knew my pace and led everyone along the edge of the canal wall. They were right there when I came up. I almost doubled the world record holder’s distance—and I went to the center, while he stayed by the wall. Safety ladders hung every hundred feet or so, covered in rust. Climbing the nearest one, I saw my opponent’s face. It still looked like he was going to be sick, but now it was because he’d lost.

He wiped his hands. “Take the money, kids. It was worth it to see that.” To me he said, “You should go to Toronto. Find a coach and trainer. You could be famous.”

He named some swim club he belonged to, but I had no way of getting to Toronto. That was another world for any kid from Port Colborne.

Bertie went to the bank on Clarence Street, where his aunt Norma worked, and changed the bills into quarters, dimes and pennies, so everyone got twice what they put in. The swimmer kept talking. “You’re the first to beat me in three years, and I’ve challenged half a dozen kids this week alone. Look me up when you get to Toronto. We’ll compete in the Olympics together.”

After he left, we celebrated with ice cream at the restaurant where my sister worked. We made sure everyone within shouting distance knew I was the local hero, who beat the national champ. Beat him bad. But so what? He went back to Toronto and made the 1956 Olympic team. I remembered his name and saw it in the paper. In Melbourne, Australia, he came in sixth in the four-hundred-meter freestyle.

And me? I went back to our rented house on Charlotte Street, where I slept on a tiny cot in the front room I had to share with two uncles who worked with my dad at the nickel plant. Some hero. We had a farting contest that night. I won that too.

Dave Gregory is a Canadian writer who worked on cruise ships and sailed the world for nearly two decades. He is an associate editor with the Los Angeles-based Exposition Review. His work has most recently appeared in Ellipsis Zine, Write City Magazine, & Literally Stories. Please follow him on Twitter @CourtlandAvenue.

WHY WE CHOSE TO PUBLISH “Olympia”:

We love “historical” pieces like this that look back to earlier times, a time when the world was a little less complicated and childhood dreams and desires focused on simpler things. Author Dave Gregory also delivers a piece with an ironic ending, one of those what-might-have been pieces that have strong resonance.

In that regard, it invites comparison to the other what-might-have-been piece in this issue: “Prayer for the Living.” Even though the two stories and their narratorial voices are entirely different (although both are first-person narratives), there is that common theme between them. This demonstrates how the imaginations of two different writers can take the same core theme and render two completely different stories from it that in no way resemble one another.