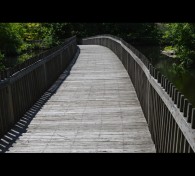 Jenna only crosses the footbridge on clear days. On a clear day, the shortcut is “doable” with enough finger touches and step counting. Even on her best days Jenna only makes it across by running her fingers lightly along the railing to ground herself. Five deep breaths, eyes straight forward, concentrate on her destination, the University buildings on the other side of the river. Don’t look down. Touch, touch.

She avoids the bridge on bad days, when the world looms gloomy and dark, or fog rolls in with wispy tendrils of despair. Then the bridge becomes an impossible structure as it vaults into empty space, fading into nothing and disappearing into oblivion. On bad days Jenna by-passes the bridge, stands at the bus stop, pays her fare, exact change; don’t look at the greasy boy who stares out the window, ignore the old lady with the residue of face powder on the fake fur collar of her cloth coat. Touch, touch, count the stops.

Today, watery light struggles through the haze of early morning. Jenna chews her toast carefully. If she loses count she will have to start over. She gathers up bus fare before leaving her apartment, counts the exact change carefully. Touch, touch, touch, triple check that the change is deep in the pocket of her dark-grey pea coat. Button up, lock the door, check the door, check the bus fare again.

It makes no sense to look at the bridge on a day like this, but secure in her decision to ride the bus, caressing correct change, Jenna risks a glance. He stands at the apex of the arch before it dips down into nothingness – a man, neither young nor old – dark and angular against the mist. Jenna steps forward as if drawn by an invisible thread or guided by a firm hand. She fingers the coins in her pocket and blocks out the empty space around her. On the bridge deck sits a small satchel, the kind used by students with a light course load. Beside it is a pair of black ankle boots with black socks neatly tucked inside. Their owner looks down at Jenna from where he stands on the thin railing, his bare feet white and clean, his toes curled down as if gripping the rail. There is no need to ask what he is doing up there, just a few feet beyond Jenna’s reach. She imagines grabbing him by the ankles, dragging him back from the edge – a scene from a movie or television show – not something she could ever do.

“Nice to meet you, Jenna.” Angelo turns his attention back to the void beyond the edge of the bridge and Jenna risks a sideways glance at the mist rising from the river. Bad idea. She closes her eyes, counts to ten and back down again before opening them. Correct change in her pocket. Did she lock the apartment door? If she stays focused on Angelo, she can do this. He wears skinny, black jeans, a rough-knit raglan sweater that has seen too many washings. The only spot of colour is a red-and-white striped scarf. He looks too calm and cool to be out here on the edge.

“Are you sure this is a good idea?” asks Jenna.

“Best one I ever had.” Angelo rises up slightly, raising his heels as if to relieve the pressure of cold metal railing against the arches of his feet. He wobbles on the tipping point between bridge and sky, and his fight to hold on gives Jenna hope.

“You should wait until a clear day,” she says hastily.

“What difference will a clear day make?”

“On a clear day you can see the other side. You might change your mind.”

Jenna grips the railing. He is guessing. There is no way this stranger could know about the day she stood on the brink. Touch, touch, count to ten. “I shouldn’t be here,” she says.

“And, yet, clearly you are.” Angelo sweeps both arms in a grand gesture that threatens to send him over the edge. A deep, voiceless scream gurgles up inside Jenna as he teeters on the brink, but all she can manage is a strangled, “No – don’t!” Followed by a flood of relief as Angelo catches himself.

“Ah, you do care after all.” His smile and piercing blue eyes show no fear.

Jenna fumbles for her cell phone. “I know someone who can help you.”

Staring down at her from the railing, Angelo looks like a deranged Johnny Depp character and Jenna hears nothing but the blood pulsing through her veins. An eerie calm surrounds her as his enigmatic question hangs in the air like mist from the river – it is philosophical, like an ancient Greek riddle – except Jenna is not Oedipus and Angelo is not the Sphinx. Then, with a sense of certainty, Jenna knows the answer. None of this is real. Obviously she has already made her decision and this is just her final reckoning.

“Are you Death?” she whispers.

“Why does everyone assume the guy on the bridge is Death?” Angelo laughs. He jumps down from the railing, landing lightly on the deck of the bridge. Jenna does not know whether to be relieved or angry when he calmly sits down to pull on his socks and boots. In the time it takes him to tie up his laces, the distant hum of traffic returns and the screech of tires on pavement is punctuated by angry drivers leaning on their horns.

Jenna remembers the bus, touches the coins in her pocket, checks her watch. If she hurries she might still catch it and save herself the endless ritual of tapping and counting necessary to rescue the day. “I need to go. I mean, if you’re going to be all right.”

“Do you know what is worse than death, Jenna?” Angelo asks. “Not living.”

Jenna closes her eyes and clenches her fist, aware she has chosen the latter. The coins in her pocket are a burden because there is not enough correct change or touch points in the world to make this day right and it is Angelo’s fault. She will have to go home and start over. Behind her a siren wails – closer, louder and then abruptly off – help has arrived. An authoritative voice instructs people to move back and make room. A chill sets in, and Jenna is certain that Angelo has lied to her about his identity. Sneaking open her eyes, Jenna jumps back, startled to see Angelo standing directly in front of her, holding out his hand. “You are Death,” she says, feeling betrayed.

Angelo shakes his head. “No, Death is at the bus stop, where a truck swerved into the shelter. The old lady in the cloth coat won’t make it to see her daughter today.”

Jenna looks behind her. Fuzzy amber, red-and-blue pulses taint the mist. She turns back and Angelo is gone. Peering ahead, she still cannot see the other side of the bridge. Jenna reaches out to tap the railing then digs in her pocket instead and throws the exact bus fare over the edge. She steps forward, without counting steps. As the far bank comes into view, so do other people. Students and staff hurry to classes; behind her the sound of heels clicking on the bridge deck. With the ring of his bell, a young man on a bicycle whizzes past her. His back tire skids out from under him as he takes the turn off the bridge too quickly. He over-corrects on the slick pavement and his front tire catches the soft shoulder with a jerk that sends him catapulting over the handlebars onto the grass. Jenna runs forward as he picks himself up and examines the damage.

“Yeah, but now I’m really going to be late for class,” says the cyclist, indicating the bent front wheel of his bike. The contents of the bicycle’s baggage rack are strewn around and Jenna retrieves a black satchel from under a bush.

“Yes, thanks.” He squints and asks, “You seem familiar. Have we met before?”

“No, I’m sure you’re thinking of someone else.” Jenna hands him the satchel and turns away. “I have to go now.” She stuffs a hand in the pocket of her coat, searching for reassurance, for exact change, but the coins are gone. Jenna stops, takes a deep breath and turns back. “Actually, I think you may be right. You do remind me of someone I met recently. My name is Jenna.”

“Nice to meet you, Jenna,” says the cyclist, hoisting the satchel to his shoulder. “I’m Angelo. Thanks again for helping me. You’re a real lifesaver.”

“You’re welcome. Everyone can use a little help on a gloomy day like this.”

Angelo looks back at the river. “I think the fog is clearing up.”

“I’m glad,” says Jenna. “When it does, anything is possible, anything at all.”

Hermine Robinson lives and writes in western Canada where the winters are long and inspiration is plentiful. She loves all things short fiction and refuses to be the place where stories come to die. Her work has appeared in FreeFall Magazine, Burningword Literary Journal, Postcard Shorts, Vine Leaves Literary Journal and other publications. She is married with two children.

WHY WE CHOSE TO PUBLISH “ON A CLEAR DAY”:

This is storytelling artistry at its best. Author Hermine Robinson immediately captures the reader’s attention with her wonderfully wrought character of Jenna. She then eases us into the realm of the unexpected so subtly that we’re caught off guard by the first surprise as much as Jenna is. And just when we think we know how the story will end, it twists yet again. Character, conflict, resolution are all here in this tight and compact tale that we’re not likely to forget for a long time.