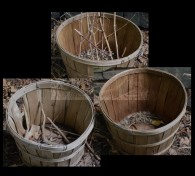 J.M.S. Madeline’s self-published debut Food in an Age of Despair (written as J. Madeline) was distributed sporadically by the author herself throughout the summer of 2008 at the Saturday Market in Boostwich, and was gratis with any purchase of $10 or more. This slim tome introduced central south-west Massachusetts to J.M.’s Two-Ingredient Granola, Grandma Pat’s Dry-Brined Cucumbers, and to the hopeful notion that achieving peace in our time doesn’t call for standing armies, atomic bombs or genetically perverted cows. Maybe what it requires is that we all eat locally sourced, honest food, carried home in a sturdy basket, then prepared with focus, care, and an open heart. Is it cliché to say that food infused with love becomes something else entirely? Madeline embraces that cliché, transports it deep inside herself, then rebirths it moist and mewling into the world as if for the first time. “Do we cook because we need to eat food,” wonders Madeline on the first page, “or maybe, just maybe, do we eat food because we need to cook?”

The centerpiece of that pamphlet was certainly her whimsical take on the reprehensible Turducken, in which she rejects that dark temple of carnivory and instead sings a joyful ode to the combined ingenuity of humanity and Earth. A sweet note of hollowed celery root, stuffed with a soprano chorus of blanched ramps, wrapped around a bombastic coda of raw chard… this is the kind of discovery that seems so obvious in hindsight that you slap yourself dismissively across the face, tender plants in your mouth and harsh tears in your eyes, and scream “I should have thought of this!” But I didn’t think of it, and neither did you.

The fourteen recipes in that book, had I eaten nothing but, could have served me well for the remainder of my life; however, thirty more would soon join them. Par-Cooked Love by J. M. Madeline arose among us in 2010, issued by the now-defunct (and sorely missed) Pewter Loft publishing house that dominated the peace-based-cooking scene in Brooklyn for the better part of the first third of this decade. “Finish this love in your own oven,” advises Madeline in the epilogue. “Bake at infinite degrees, for time eternal, and so don’t dare wait for the timer to ding. Be the ding you want to hear in the world.”

With that book she carried her thesis further up the mountain, into rarefied air. Auntie Meg’s One-Ingredient Mushroom Soup not only sustained me through a very harsh and toxic winter of 2011—I’d inadvertently been exposed to a can of Dinty Moore chili and thereafter suffered from diffuse fasciculation and intestinal malaise—it also forced me to deeply reconsider what exactly is meant by the completely arbitrary word soup. To dare question the logical validity of any linguistic structure is a recurring prompt in Madeline’s work (see also: Y. E. Tarborough’s essay “What We Talk About When We Talk About Kale” in the Portland Food Review, Spring 2012) and I suspect that if Gödel were alive to meet Chomsky in the year 2015, they would discuss little but Madeline.

With the recent publication of Ecce Panis Angelorum, we now have the conclusion of this trilogy. This is Madeline’s The Return of the Jedi, except her Ewoks are pearls of cooking wisdom designed to “bring down the shields” of Imperial meat-based gastronomic injustice. Madeline brings to an emotional conclusion not only her own personal pilgrimage through the desert, but undoubtedly now claims the final word on the subject of food. Just as G. F. Redding’s masterwork The Demon in the Needle “closed the book,” so to speak, on the issue of vaccine harm and rendered all future debate meaningless, so does this publication signal the end of an era: that time, now historical, when we didn’t know how, what, or why to eat.

“When a true genius appears in the world, you may know him by this sign, that the dunces are all in confederacy against him.” Or against her, Mr. Swift! The boo birds are already cawing, primarily to note that Madeline’s latest was published by a well-known international corporation and is, in fact, currently available on Amazon in both print and digital download formats. J.M.S. Madeline is a sell-out! they cry. J.M.S. Madeline is a corporate shill! I saw J.M.S. Madeline purchasing a mass-produced wicker basket at Hobby Max, with a credit card! To which I say: I don’t believe that for one filthy second, and for that matter, what were you doing at Hobby Max?

Judge not, and read. There have been quiet mutterings over the years, arguably deserved, that Madeline’s attention to the precise sourcing of ingredients was vague and somewhat, dare I say, wishy-washy. These complaints have been addressed and quashed. In a concise Appendix titled “Notes on Procurement,” she instructs thusly:

Barter for a well-used bicycle with a beautiful forward-facing basket. Point yourself toward food, and pedal. If you cannot reach the food before the sun touches the horizon, it is not for you. That food is a stranger, and says “I never knew you; depart from me.” Redirect yourself. Redirect yourself.

Madeline then asks us Socratically which regions of this world consistently experience the most strife. The Middle East, and sub-Saharan Africa, maybe? Fair enough. Then she asks: Do you wish to hazard a guess which regions of this world consistently import the most food from far-flung locales? The Middle East, and sub-Saharan Africa? Yes. A Palestinian boy eating canned corn from Ohio? Is this not the antithesis of locally sourced? His belly full of distant, alien produce, working gloomy magic on his soul… when he throws a rock at an Israeli tank, who is he really throwing that rock at?

All well and good but surely we buy a cookbook for recipes, and many will perceive this as a cookbook. Madeline fulfills that expectation and then some, with no fewer than one hundred and ninety-eight recipes. Considering that the book itself is only one hundred and fifty-four pages long, this demonstration of precision and elegance could only be achieved by a master working the page with a laser, trimming away not only the fat, but also the muscle, the fascia, the tendon, and then the bone, leaving only the marrow. And thus we are fed the tastiest morsel, like baby birds blindly mouthing skyward, our mother soothing us, here, here, here is what you need and nothing more. After this, any other cookbook you read will seem disgustingly engorged, a bloated corpse on a post-apocalyptic beach.

Let us examine one of the wiggling worms our mama bird delivers. A clear highlight of the opening chapter (“That Which Goes Atop”) is Guru Tan’s Homeopathic Tomato Sauce:

Carefully pluck one locally sourced tomato from your best wicker basket, between the index finger and thumb, and playfully dunk its bottom third—or up to the entire bottom half, on chillier evenings where the need for comfort is most intense—quickly into a pot of tepid spring water, for no longer than it takes a sycamore leaf to fall from the lowest branch of a tree. Remove the tomato and donate. Serve the sauce immediately over the carbohydrate of your choice… or as a decadent treat all by itself, with a wooden spoon and whatever the view from your bay window.

Readers, I giggle now, recalling that I consumed the entire first batch in one sitting! My window looks out onto the back porch of a halfway house, living in the city as I do, but even though I’ve had a security camera trained in that direction at all times for the past five years, it was still, with these freshened eyes, as though I’d never seen it before. The sugo so invigorated my appetite that I remained hungry for more. I turned back to the book, where her recipe for No-Ingredient Mole lovingly but firmly reminded me that it’s the food we don’t eat that, paradoxically, sticks with us the longest.

Not all of these are for beginners. Take the recipe for One Apple:

You may have several apples in your basket. Maybe, once upon a time, you had more. Maybe you had fewer. Right now, you have the number of apples that you have. Don’t forget that. Leave yesterday’s apples to yesterday, and tomorrow’s apples to tomorrow, and Caesar’s apples to Caesar. Take one of the apples in your hand. Tomorrow you will have one fewer. Eat it. (Save the stem for One-Ingredient Fiber Bar, pg. 59.)

It would be at odds with the progressive worldview of this fine publication not to acknowledge the presence of alternative viewpoints. An argument exists and rears up in certain unsavory internet backwaters—mostly public forums with free registration although I’ve shuddered to see it appear even in the comments section of a New York Times article—purporting that Madeline’s instructions do not feature the necessary structure to be considered “recipes.” Hey Mizz Madeline, wrote toofmo_12, if I fart in a box and giftwrap it, can I plausibly give it to my brother on Christmas as a home-cooked treat? This is almost too silly to countenance. Are these recipes, you ask? This is a question only in the very literal sense that these too are questions: Do puppies feel love? Does the Sun shower Gaia’s bosom with nothing less than Harmony made visible? Oh, and to answer you, Mr. Toofmo: not with your Western diet!

Yes, it is. Could it be perceived as being imperfect? Yes, it could. Therein, I think, lies the lesson.

Brandon Barrett is a practicing cardiologist living in rural Virginia with his wife and son. His fiction has appeared or is forthcoming in the Literary Review, Tahoma Literary Review, the Cossack Review, and Jersey Devil Press.

WHY WE CHOSE TO PUBLISH “On J.M.S Madeline’s Ecce Panis Angelorum”

In his cover letter, author Brandon Barrett said, “I wrote [this piece] as a good-natured reaction to trends in the world of food writing, initially only for the amusement of my friends. The premise is odd enough that I wasn’t sure who I could realistically even submit it to, so I reluctantly shelved it and moved on to other things. But then I read “Thump Dumps a Chump” and “Comedian Walks Into a Self-Referential Joke…” and thought to myself: wow, cool. Maybe these folks…?”

And we’re very glad he submitted it to us because we found it brilliantly done.