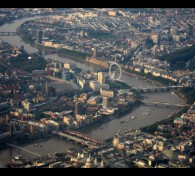 Jean climbs the crane’s ladder. Gusts from the west try to bully him, but he ignores them. He can move faster than his panic, and his fear, and his thoughts. That is the trick. That is Parkour.

Standing on the topmost rung, arms outstretched, he bellows. The wind takes his cry. It is a fair trade; he is about to claim the sky.

Far below he sees a boat idling down the Thames. He can see miles of roofs, the training grounds where he first learned to push at the edges of himself, at his human limits. Jumping bus-width gaps, scrambling up seven-story drainpipes, Charlotte guiding him through those first impossible obstacle courses – but these are not his memories. They feel like they belong to a different person, in a different dimension.

Charlotte would never have come up here, this high, to do what he is about to do.

Before it becomes clear in his mind, he pushes the thing that happened to Charlotte into a dark mental corner, reminding himself that everything he is about to do is a tribute to her. The ultimate tribute, something they had watched accomplished traceurs doing in online videos but had never seen in person.

He moves his foot from the ladder to the beam at the far left of the crane’s arm; his other foot follows automatically. The beam is barely the width of his trainers. He uses the central beams of the crane like a banister. He doesn’t need to though; he knows his body so well he could do everything hands-free. Everything except the final part.

Jean realises he is squinting. Even though the day is overcast, the light that makes it through the clouds is unimpeded and intense. At the end of the crane arm he lowers himself so that he is sitting at the join of two beams. His legs dangle over London.

He relaxes for just a moment, but that is all his mind needs. It is a week ago, Charlotte’s birthday.

She takes Jean’s hand and leads him away from the others, up the outside steps of the Kentish Town pub and onto the roof. She’s never taken his hand before, and even though Jean saw her drinking orange juice, he wonders if there might have been something else mixed in with it. And when she kisses him, he thinks he can taste vodka on her tongue. This is what he’s been waiting a year for, so he tries not to think about the fact that, in their circle, alcohol is generally frowned upon.

The kiss is long, and when it ends, he knows from the look on her face that it is just the first of many. She is grinning and talking about their route, pointing out where they might jump tonight. But Jean isn’t listening. The memory of how she had tasted is more exciting than any jump they’ve done together.

He moves towards her, to kiss her again, but she senses his intention, and with a playful wag of her finger she jumps up onto the ledge overlooking the road. But she’s miscalculated it, as she always does every time Jean plays it over in his head. She vanishes over the side of the building, and when Jean leans over to reach for her, she is already too far down.

What had been that expression on her face? The raised eyebrows and the mouth just very slightly open. It hadn’t been terror, or shock, or sadness.

Angry with himself at having allowed the reverie to play out in full, he shifts his entire weight onto the palms of his hands. He turns and lowers himself so that he is swinging from the beam that just moments before he had been walking along.

He has done it thousands of times before in the gym, and on beams of scaffolding just a metre or so off the ground, and even in his mother’s house, swinging from the bottom of the rails on the upper landing, having launched off from the stairs. Holding the entire weight of your body is the only challenge, the rest is a matter for the mind. And Jean’s mind is stronger than his body.

He closes his eyes and breathes in air that he has no right to breathe. This far above the city it is as clean as mountain air. Around him are hundreds of metres of empty space in every direction. This is something the rest of the world will never know. He is like one of the great explorers or adventurers. He is at the border of life, at the door to the realm of Plato’s forms, as close as the living can get to the secrets that only the dead know.

But he can get closer. There is perhaps one more rung. Late at night, he has imagined climbing it and woken to find his heartbeat rapid, sweat soaking his bed.

He is thinking too much. He has to act. Jean releases the beam with his left hand, his strong hand, and for a moment he hangs high above the world from just five fingers. His joy is momentary and blissful. Then it is submerged under panic when he feels he is moving to one side against his will, his fingers slipping from the beam. He understands his body so well, and the way that his weight is now displaced, that he knows any attempt to stop the inevitable will be futile. Yet still he tries, stomach muscles straining, torso twisting. A grasping arm-flail that finds nothing but fresh air, dumb instinct against gravity and the laws of motion.

Jean doesn’t fall for long. He has time to think about the things that the rest of the world doesn’t know. And to think about how close he is now to finding out the secrets of existence for himself. The secrets that Charlotte already knows.

He thinks about trying to land headfirst.

And in the moment before he hits the concrete floor of the newly built car park, he understands Charlotte’s expression, because he is certain he feels it on his own face, a final thought having entered his mind: What if there was something that the rest of the world knew, that he… did… not.

S.R. Mastrantone is a writer from Oxford in the United Kingdom. His work has been featured in The Fiction Desk (where he has been a winner of their Writer’s Award), carte blanche, Silver Blade and Lamplight.

WHY WE CHOSE TO PUBLISH Only The Dead Know:

One cannot help but be touched by S. R. Mastrantone’s modern Icarus tale that helps us understand the complex physical and psychological factors that drive Man to push beyond his limits and into realms beyond his experience.

As a bonus, the story also prompted us to learn something about Parkour and its practitioners.

ONLY THE DEAD KNOW by S. R. Mastrantone