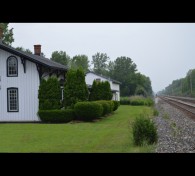 I don’t listen for the sound of trains anymore.

After five years of pausing at any bells, train whistles, or ding-donging, I stopped caring about the whole damn episode. Any time I’d walk over train tracks, in those times, I’d look both ways and sniff the ground underneath the tracks: could I deduce any scent of clean, sheeted snow? Were the tracks still humming with jingle bell music? I will confess, back then, I might have licked the iron rails, hoping for some drop of the nectar hot chocolate. But, nothing—nothing ever. Only the taste of sweat and pennies.

Now, when I board trains, I pick the least stained seat. This is as magical as trains get now: shuffling in to a clean, available seat, and leaving the train with no spilled coffee on my silk tie. No dancing conductors—there is the occasional dancing group on the train, all teenage kids looking for extra money (to do what? more drugs?) No midnight rides, unless I’m late coming out of the city because I got stuck on a project at the firm. There’s homeless men pissing in the corners and carpet stains from blood or puke or urine. There’s stoppages and late runs and fights. There’s suicides on the rails.

That damn bell got lost in a move between apartments and college. My girlfriend at the time questioned me about my moping around that week. I tried to tell her—and she’s the last person I tried to tell.

“I had a dream like that once, too,” she replied, and then proceeded to tell me about a flock of penguins flying her over Alaska.

But now, my son hit just that age. His limbs are stretching out and his growth chart in the kitchen looks like railroad tracks, a tick for each inch. It’s November and we just moved to a house outside of the city. I complained about the rails being so close, but it knocked about three thousand bucks off the price. Every morning that my son comes padding into the kitchen, yawning and rubbing his eyes, the train passes by.

He says he doesn’t believe, already a smart ass at six. He says there isn’t any such thing as Santa Claus. I just listen to the trains go by, rumbling and roaring. I wonder if he’ll learn. I wonder if some Christmas morning, he too will carry secrets in his robe pockets.

Stephanie Renae Johnson is a freelance writer and editor living in the mountain town of Asheville, North Carolina. An avid lover of children’s literature, she is working on her first young adult novel while pursuing her Masters in Writing at Lenoir-Rhyne University. Her work—poetry, non-fiction, and fiction—has been published by Danse Macabre, Fat City Review, Prick of the Spindle, and Slink Chunk Press.

WHY WE CHOSE TO PUBLISH “Polar Expression”

When we look at pieces to publish in Fabula Argentea, we tend to avoid those that lack universality or that deal with something some readers might not be familiar with, hence the story will be lost on them. However, we expect that most or all readers of our magazine will have seen the movie The Polar Express. That aside, we could not resist this excellent piece that takes that story beyond its ending and tosses us back into the real world, yet it still holding out hope that fantasy is not entirely absent in our everyday lives.