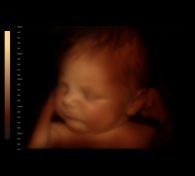 Zaria went into the living room and found her husband Paul there. The moment had come, call it a gut feeling.

“Oh? Has it been four months already?”

From there Paul went into the bedroom and found the communication gloves under a pile of paperwork and self-help books. He came back to her enthusiastic with the gloves already on. “Okay,” he said, “let’s do this.”

Zaria lifted her shirt and Paul readied the gloves.

“But what if-if…” She couldn’t finish, a memory hit her.

Paul placed gloved hands on her belly and breathed slowly, in and out. Zaria followed her husband, slow breaths, in and out. The gloves did the work, scanning her belly, a silent search.

They waited and breathed, in and out. Both of them with racing thoughts, Zaria’s much darker than Paul’s. But she couldn’t be blamed for that. The dark thoughts reflected reality. That reality made her question every little thing, and turn hope into nothing more than a whimper.

“Paul I—” Zaria started but a voice interrupted.

Paul’s eyes lit up. “Hey there, were you sleep?”

“I’m sorry. I won’t disturb you for long, I just—we just…” Paul had to find the words or rather find the right way to say them.

Zaria took over, “Hello in there.”

“Well, we’re—” Zaria stopped. She reminded herself that she could only say the words once all had been confirmed. She could not overstep the boundaries and claim herself to be what she wanted. They needed consent; all parties needed to be in agreement. That was the law. The couple knew this and understood, but how could they explain this to a child, one yet to be born? If a future life does not consent, then a mother must do as Zaria had done before.

Paul was ready now. “Before we answer that, I have questions for you.”

“At some point you can leave where you are if you want to. Do you want to?”

Paul rephrased. “Would you like to come here and meet us?”

He mouthed an apology to her. “So yeah,” he said, “lots of stuff. We would love for you to see them and experience them and let us take care of you.”

“Oh yes,” said Zaria. “Feed you and clean you and teach you many things.”

“But wouldn’t you like to feed yourself?” said Zaria.

The voice took a moment before simply saying, “Yes.”

“Well out here you can and eventually you can walk using your own feet. Walk from place to place. You’ll grow and grow every day. You’ll have so much fun,” said Zaria.

“To be fair,” said Paul, “it can be fun, but we also want you to know that outside life comes with pleasures as well as… heartbreaks.”

Zaria looked at Paul. Not knowing what direction he would take, her eyes searched for him but his were fixed on her belly.

He continued. “Life outside is amazing and beautiful, but there can also be trouble. I’m telling you this to be fair to you. Sometimes life can beat you down. Not purposely of course, but this is the way of the world. I know I’ve spoken about the good things, the beautiful things, but there’s also some bad.”

“Bad people mostly. Some people are… well, how they are. When you get older, you’ll have to deal with pain and heartbreak and pressure and disappointment. These are all facts of life. I want you to know that going through these things will not be your fault. Everyone at some point went through certain struggles.”

“But we can overcome those struggles,” said Zaria. “We promise to do the best we can to help you in any way we can.”

“If you truly want us to. This is your choice,” said Zaria.

The voice went quiet, as if considering, before finally saying, “I think I would. I think I’d like to experience life… in the outside world. It sounds interesting.”

Zaria shed a tear that paused at her chin and fell on Paul like a raindrop.

“We’re…” Paul started, then whispered Zaria’s name. She was looking up at the ceiling and repeating the words “thank you.” Paul whispered for her once more and Zaria looked down at him with tearful eyes. Some of the tears went from her and fell on his face. He nodded to her for confirmation.

Paul smiled. Finally hearing the word from her in a way that wasn’t sad or angry, said in a way that came from a place of happiness, rather than agony.

“Protectors,” said Paul, “caregivers, the ones who will love you always.”

“That sounds nice,” said the voice.

There was a silence in the living room. The couple let the moment linger until the voice broke the silence.

Paul took his hands away from Zaria’s stomach, ending the connection.

“Paul, what are you doing?”

“I wanted that to be the last thing they heard before sleeping.”

Paul took off the gloves and set them aside. “See, it all worked out.”

“I know, you had to confirm. It’s just… I didn’t want them to be dissuaded.”

“That’s right, they want to be born. Can you believe that? Our baby wants to be born!”

Paul wrapped his arms around her.

Warm life radiated between them.

The couple held on to each other, neither wanting to let go because it all felt so dreamlike and unreal. Finally they would have a family, finally a child that wanted life. Finally they could stop thinking that they had done something wrong or were somehow unfit to be parents, somehow unworthy of such an honor.

They could prove themselves now and make up for lost time, make up for lost children. The memories were still fresh, and those memories brought pain, especially the one who did not respond. But the past is only that, best forgotten, for the willing parents who have gone through so much. Ready and loving arms awaited the child, and happiness would soon come to the worthy couple.

Rickey Rivers Jr was born and raised in Alabama. He is a writer and cancer survivor. His work has appeared in The Gray Sisters, JJ Outre Review, Hybrid Fiction (among other publications).

WHY WE CHOSE TO PUBLISH “Pre-Birth Agreement”:

This piece represents author Rickey Rivers Jr.’s fourth appearance in our magazine. And he has delivered a strong piece.

We periodically receive stories about expectant parents—and some where the child is lost at birth. As with all submissions, we look for something different on the theme. This one certainly fits the bill with its tight writing and dialogue and an emotionally satisfying ending.