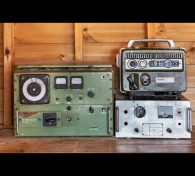 Radios are as old as dirt. Your average school kid can build a radio. But radio waves are notoriously slow, taking almost 40 years to reach the nearest star. But by the same token, a jockey can move much faster on the back of a horse than they can propel themselves. So the minute you can piggyback a radio signal on the back of a faster-than-light tachyon… well, then you have something extraordinary.

Jason Munford was a young man fresh out of school. Tall and underweight like most of the students in the astrophysics department. His shaggy dark hair was accented by the shadowy stubble on his chin. Socially awkward, he was the last person you’d think of wanting to contact other races. But Jason was desperate to make his mark. He needed to achieve something, if for no other reason than to pay off his mounting collection of student loan debts.

His lab wasn’t particularly impressive. To the outsider, it looked like a collection of heavy tables with thick legs that would have supported a dancing elephant. The room was silent, except for the whirr of the cooling fans in the servers. There were soldering irons strewn about, diodes, IF coils, transistors, resistors, electrolytic capacitors, and at least half a dozen oscillator coils lying about. Only the device Jason was fiddling with looked more like a circuit board than a radio.

The room smelled of rosin core solder and xylene from the markers on the whiteboard. Each whiteboard was filled with esoteric formulas and unusual schematic drawings. Jason warmed his hands over the soldering iron. He was wearing two shirts and a sweatshirt, but it wasn’t helping. He needed to skimp on the heating to keep costs down. It was the only way he could afford the oscilloscopes he needed.

Jason wasn’t lonely. He preferred to work alone. This way no one was looking over his shoulder constantly, pointing out all his mistakes. The one thing he dreaded was embarrassment.

He leaned back in his chair and slid the finished board into the back of a modified computer panel. There was no way he could afford a cleanroom suit. He would just have to cross his fingers and hope everything went well. He checked to see the board was slotted in correctly. Closing the access panel, he turned the power switch back on.

Sighing, he walked around the front and typed out a few commands on the keyboard. “There, that’s done,” Jason muttered to the empty room.

It took months to receive the first signal from another world. Jason had almost forgotten he even built the device. Still, he was thrilled when the first return signals started appearing. There were papers to be published and guest lecture appearances… not to mention the sudden attention of the media.

Of course, aliens don’t speak English, so there wasn’t any communication yet. No discourse. Still, now that we knew others were out there, a real conversation was possible. So, faster than you can say “research grant,” Jason was ensconced in a shiny new lab with almost two dozen assistants.

Jason luxuriated in his own office now. A collector’s copy of Short Wave Craft was framed on the desk. A display of vacuum tubes sat in a row across his desk. The heat even worked and there were framed posters of mechanical principles and the intricacies of clock-making that had a special draw for Jason. For him, it was all related to time. After all, when you were looking up at the stars you weren’t seeing them as they are today, but how they were in the past. Time was the key to everything.

It took an additional three years just to decode the alien’s language. Jason and his team were meticulous about their translations, all working toward the day when someone from Earth could hold a dialog with an extraterrestrial. The world was so excited as the day drew nearer they had to build a press room for the media adjoining the lab.

And so the day arrived. A real spring day: sunny, calm, the sky a limpid blue. Schoolchildren watched on monitors. There were representatives present from every country on the planet. They watched, slack-jawed, as Jason began the first conversations with beings from another world. At first, Jason got the impression he was talking to a young child who had built the equivalent of a ham radio set. The alien started by sharing his dreams of interstellar travel with Jason and his associates. As if it was something he would be allowed to do once he grew up.

“Do your people travel among the stars often?” Jason inquired. He struggled not to sound too eager. But he was more intrigued than you could imagine. Like the alien, Jason found even the idea of interstellar travel exhilarating.

The answer that came back over the speakers was more than he could hope for. “All the time…” the alien replied.

Jason was deadpan. “But what about the great distances involved?”

“Those are nothing,” the alien stated flatly.

The room came alive with questions. Everyone talked over everyone else. Jason had to ask for quiet. Naturally, everyone wanted more details about their methods of space travel and how it was accomplished. “Can you tell us how you travel between the stars?”

There was a long silence. Jason even checked all the equipment to make sure it was operating. He got that sick feeling in his stomach. It was the sensation of being caught in something you shouldn’t have become involved with. Everyone was watching. Yet everything looked operational. Finally, the reply came back. “Why? You can’t leave, you’re on a prison planet. That’s why they left you on a world with no warp resources. Everyone knows humans are too violent and treacherous to be allowed to be part of galactic society.”

David Woodruff is an unnoted historian, professional storyteller, and author of several short stories and novels. He is the recipient of the Sycamore Award and the Silver Torc for storytelling. He considers himself to be the best storyteller on his block… perhaps his whole subdivision.

He lives in Brighton, NY with his wife, son, one normal dog, and Fuzzball the Destroyer of Toys.

WHY WE CHOSE TO PUBLISH “Radio Waves”:

This is author David Woodruff’s second appearance in Fabula Argentea. This time, he brings us a well-done, thought-provoking tale that makes us wonder if there could be a glimmer of truth in it. After all, that’s what makes for the best speculative fiction tales. A number of scholars have often wondered why—given the vastness of the universe and that there surely must be intelligent life on myriad other planets more advanced than we are—we have never heard from any of them. Maybe David Woodruff has discovered the answer.

A RAPE OF RAVENS by J. B. Toner

PICK ME by Curtis A. Bass

HOW THE WINCHESTER GANG SAVED THE WORLD by John Caligiuri

ZUK AND ZUB—A FABLE FOR OUR TIME by James Fox