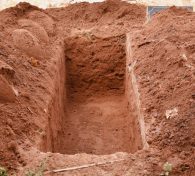 IMAGINE a dark rectilinear hole. Descending parallel lines. A narrow, vertical tunnel. A cold, wet gust of earthy odor arises, which, as if you needed reminding, tells you precisely where you are.

Imagine a Sunday morning phone call. It’s too early; you let it ring. Over an hour later, you listen to the man’s son on voice mail. We need to talk. Dad’s having trouble breathing. It’s getting bad.

Imagine not returning his call, but going to church, telling no one, driving home, and that evening attending the annual parish dinner.

Imagine his open casket services and looking at the man for whom you would not return a phone call. Imagine the permeating fragrance of the incense. Imagine being a pall bearer and placing that man on straps hung over the rectilinear hole.

Imagine delivering the eulogy his wife had written but was unable to read, then ad libbing a portion of that eulogy. Imagine presenting his family with an oak display case for the burial flag. Imagine talking and joking with his friends during the funeral reception.

Imagine being me, years later, still haunted by that dark rectilinear hole.

WHY WE CHOSE TO PUBLISH “Rectilinear”:

Author Thomas Elson’s “Rectilinear” demonstrates what well-done flash fiction can accomplish—in this case in only 190 words.

We are in the narrator’s head from the beginning and held there with strong visuals and the narrator’s emotions. And did you notice the subtlety of the second-person viewpoint? We rarely see second-person stories written in the imperative mood. It’s not easy to pull off, and we salute the author’s writing mastery of it here.

HAPPY EVER AFTER by Ted Macaluso

THE FIGHT by J. B. Toner

THE FUNNIEST STORY EVER TOLD by J. Manfred Weichsel