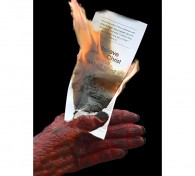 The house towered over the rest of the street. It was so huge it was more like a castle than a house, but it stood in the middle of a row of semi-detached houses looking as out of place as a cat at a dog show.

Matthew and I stood at the gate, staring at the building in front of us. The phrase ‘The Addams Family’ sprang into both of our heads.

Matthew looked at the number hanging loosely from the gate post.

Matthew gave me a sideways glance.

“It’s the number of the beast, the unholy trinity…”

“What I mean is,” I interrupted, “are we expected to believe Satan lives in a street called ‘Tickle Road’?”

“Okay then.” Matthew handed the bag of leaflets to me. “You go and knock on the door then.”

I gave my friend a haunted look, and then squared my jaw in what I thought was a defiant way.

“Very well.” I swallowed nervously before pushing the gate open; I was disappointed when it failed to squeak ominously.

As I stepped into what can only be described as a garden, although forest was a close second choice for a description, I was sure the temperature dropped significantly. It had been a bright summer morning; now it seemed like a dim autumn evening.

Slowly I moved towards the door, casting nervous glances at the towering weeds as I went, expecting either a lost explorer or a prehistoric beast to leap out on me with every step.

Finally I reached the door and was presented with the most enormous knockers I had ever seen. I reached out gingerly, tactfully ignoring the bad joke that had just passed by, and banged on the door.

There was a series of grunts and mutterings from inside the house, and then the door opened slowly, again failing to creak in an ominous fashion. I couldn’t help but feel cheated.

I couldn’t see if anyone was standing there. From inside the house came an impenetrable darkness that seemed to swallow any light that might be stupid enough to cross its path, but I thought someone must have answered the door and so it stood to reason they were waiting for me to speak.

“Good morning… er…” I stammered. Was I talking to a man or a woman? “Sir.” I finally settled on, “We are here on this glorious morning to ask if you have let Jesus into your life.” I beckoned for Matthew to join me and let out a yelp when Matthew appeared at my side almost instantly.

“I followed you,” Matthew said in explanation.

“You could have said you were right behind me…”

“Let’s not argue in front of our friend here.”

“Of course,” I said. “Sorry.” I turned back to the homeowner. “Would it be possible, sir, if we could have a moment of your time to help you accept Jesus?”

There was a movement from inside the doorway. For a moment I thought I saw red eyes glaring at us, and then the figure turned away and the eyes, if that’s what they were, were gone.

“Do you think he wants us to follow him?” I asked.

“He left the door open.” Matthew shrugged “He must do. You go first.”

“Because you spoke to him first.”

“Only because you made me.”

“Just go inside before he changes his mind and slams the door on us,” Matthew whispered. “We don’t normally get a chance like this.”

We followed, but since neither of us wanted to be the first one inside we squeezed in through the door shoulder to shoulder, walked down a small passageway shoulder to shoulder, and found ourselves in a dimly lit living room. There was a program on the television showing some cute kittens frolicking in a garden.

“May we take a seat?” I asked. This time I was sure they were red eyes looking at me, but why I couldn’t see the person behind them I didn’t know. I decided to take the initiative and sit down, which left Matthew standing and being the centre of attention of those red eyes.

“I think I’ll sit as well,” Matthew said quickly. Unfortunately, he chose the exact same chair as me and again we found ourselves squeezed shoulder to shoulder, two men in a chair designed only for one.

“This is a nice home you have,” Matthew said, despite the evidence to the contrary.

I looked around, expecting to see swords and axes and disturbing artwork on the walls. What I didn’t expect to see was a picture of two lovebirds cuddling up on a branch. Somehow that image was more disturbing than my expectations and I turned away with a shiver.

“So have you considered letting the Lord into your life?” I asked brightly.

There was grunting noise from behind the red eyes. It took us a few moments to realise it was a laugh.

“We get that kind of response a lot,” Matthew said. “But consider the miracle that is life. So many different forms of life upon this earth has to be miraculous, even the sun rising in the morning is a miracle of God’s design.”

“And the moon,” I pitched in. “The sun’s equal and opposite, brightening the sky at night.”

“Of course, we know science provided us with the reasons for the sun and the moon a long time ago, but isn’t science just another of God’s miracles?” Matthew retook the lead.

We were finding it difficult to go on in the face of those red eyes and impenetrable silence.

“I’ll tell you what,” I said. “Why don’t we leave you with some literature,” I pulled a leaflet out of the bag, “which you can read at your leisure. Should you wish to know more, there is an address on the back where you can find us.” I held out the leaflet hopefully and almost squeaked when a large, misshapen hand with huge, black, pointed fingernails plucked it away from me.

“Do you have any questions now?” Matthew asked in a voice so high it was possible only dogs could hear it. There was nothing but silence in return.

“Well in that case, we’ll let you get back to your programme.” I gestured to the television. “Looks quite goo,.” I said as Matthew and I stood up simultaneously.

We found ourselves shoulder to shoulder again as we made our way to the front door. Neither of us wanted to comment on the presence that followed us down the passageway.

As soon as we were outside, the door was slammed shut. We hurried past the giant weeds and out the gate. The moment we left the garden the sun seemed to shine more brightly.

“Yes,” I agreed. “I don’t wish to sound arrogant, but I think we might have got through to him.”

We were just coming to the next house when I felt warmth coming from my bag of leaflets. I pulled them out and was surprised when they burst into flames, somehow managing it without burning my hand.

“Oh well, might as well call it a day,” I said as the ashes tumbled away in the wind.

Andrew had a religious upbringing but does not consider himself to be religious, although he finds this the source of most inspiration for both comedy and horror. He also enjoys science fiction and fantasy.

WHY WE CHOSE TO PUBLISH “Saviours”

Author Andrew Atkinson’s speculative works have appeared previously in Fabula Argentea (issue 4, the chilling “Getting a Life” and issue 5, the droll “The Afterlife of Jackson). While we accept and publish pieces as they arrive and don’t arrange our issues around particular seasons or themes, “Saviours” makes for a perfect Halloween piece.

2 comments on “SAVIOURS by Andrew Atkinson”