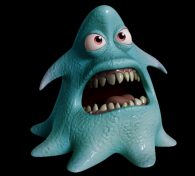 [The author prefaces his tale with this: Ruling the world. It’s everybody’s dream. But for Clovis the Cruel, it’s just a hobby. Just something you do to take up time. Frankly, it was rather boring. Once you took over the world, someone was always trying to take it back. It was tedious.

Clovis the Cruel couldn’t understand why some people wanted to take over the world. He’d already done it, several times. But it was long ago, far before the dawn of civilization. All you needed was a good army. A loyal army. It helped if everyone in your armies were your relatives. And Clovis had oodles of relatives. These armies bristled with the most advanced weaponry. He basked in the smell of victory. Although, if truth be told, it smelled a little like ozone. But he was mostly in retirement now. From time to time, he came out to help with a crisis or some other emergency, but he preferred to stay home.

Algus the Crony slid next to the absolute monarch and whispered in his ear, “It’s back.”

Clovis leaned forward. “Is it now?” Clovis had heard of the Great Shadow, but he always thought it was dead… long gone. Still, whenever the Great Shadow appeared, it would decimate his magnificent armies. “Any information from Intelligence?”

“Just the usual, Sire. But we still lack details,” Algus murmured. “Our best information says it resembles us… if we were somehow reversed. The astrologists all say they are a mutated form of ourselves.”

There was a low rumble in the building. They were clearly under siege. “You know why we have astrologists, Algus? To make economists look more accurate,” the planetary ruler sneered. “Get me some more accurate data. And prepare my Imperial Airborne Shuttle. It’s time we moved on to a more secure location for the counterattack.”

“As you command, oh Ruler of the Earth.”

His personal guards began to hustle, readying for the evacuation. His guards were all highly dependable since they were all his first cousins. Clovis could hear the echo of the attack. They were getting closer.

Algus appeared with a worried look on his face. “Your Grace, Intelligence has discovered the name of the invaders.”

His work has been praised by one or two members of his family and a few friends. He lives in Brighton, NY with his wife, son. He can be reached at david.woodruff.ny@gmail.com

WHY WE CHOSE TO PUBLISH “So THAT’S What It Does!”:

As expected, we’ve received a number of Clovid-19-related submissions to the magazine. We found author D. S. Woodruff’s inspired piece to be different and with a clever and totally unexpected outcome.