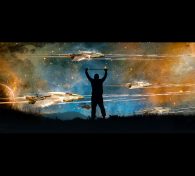 “I Call Your Name” by The Mamas and the Papas plays on the loudspeakers stationed on the tops of towering wooden poles positioned randomly throughout the compound. The barracks are a silent sight. The red desert sand blows up against the wooden structures. When the song stops playing and a voice carried by the loudspeakers shouts orders, the compound livens.

They banned the education system. The world government, I mean. Back in the days of simplicity, children were taught in schools. The world government decided enough with that, so they replaced it with what they thought to be more valuable: exercise. Strength, they told us, was the new powerful mind. It would help us overcome our difficulties and our new fear. We feared the signals coming from the planetary system next to ours. The signals were monotone, dreary in nature with no expression to suggest impending violence, yet the people of Earth feared what they heard, thinking War of the Worlds or Independence Day was about to come to life.

Young men and women stream out of the barracks like river water. Their feet patter as they step towards their positions. A cloud of red sand is kicked up by their feet. The voice over the loudspeakers still shouts orders. The young people continue to get in formation. The hot sun rests on their shoulders. In the distance, a large red mountain range makes for a lovely backdrop, but it also reminds the young of the wasteland they live in.

The world government stopped the education system soon after the signals, only allowing a select few to stay in schools—mostly those who were wealthy or showed a great potential. The rest of the younger generation were asked—but in all reality, it was more like forced—to pack up our bags and be shipped to Mars for bootcamp, otherwise known as “super soldier camp,” for we were more than regular soldiers. On Mars, they trained us how to be strong, how to fight, and how to use new technology against the aliens.

Heavy breathing can be heard from the young soldiers-in-training. Since Mars lacks the amount of oxygen they are used to on Earth, the young work overtime to keep breathing. In formation, they try to still themselves. They mumble under their breaths to one another. Their eyes glue to the direction they face. They’re like prisoners of war. They’re forced to be there. They are forced to train, and soon, they suspect, will be forced to fight.

Every morning, orders were barked from the loudspeakers positioned around the compound. Nobody ever saw the man who shouted at us like dogs. In fact, nobody ever saw a soldier who watched over us. It was almost like we were on Mars by ourselves, yet none of us felt like we were alone. We all collectively felt like someone hovered over our shoulders, eyeing our every move to make sure none of us screwed up. We obeyed. We did our exercises in the morning hours, we ate afterwards at a robot-controlled café on the compound, then at noon, we trained with super soldier technology. I excelled in building weapons.

“What are we doing here?” one boy asks another. They pant like dogs in the Martian heat.

“What do you mean?” responds the other boy.

“I mean… what are we doing here?” repeats the first boy as he wipes sweat off his forehead. “This doesn’t make any sense. What war are we fighting? I don’t see an enemy.”

The other boy shrugs.

Strength. Every day we kept telling ourselves we were on Mars to gather strength. The world government ordered us to come back to Earth with more strength than we ever knew. We would come back with impressive skills, huge muscles, and more abilities than we knew what to do with. The signals coming from deep space were a warning to us. By the time the aliens were to enter our solar system, they would be met with a great force, a force of strength. I kept telling myself this. I told myself my place on Mars was for the greater good, but doubt always arose in my mind. At night, I would look up at the stars and ponder what we were going to fight. The truth is, I still don’t know what we are supposed to fight. It’s been eighty-seven years. I’m healthy as ever, though, and I await to fight.

Mason Yates is from a small town in the Midwest, but he currently lives in Arizona, where he is studying at Arizona State University. He has interned with the magazine Hayden’s Ferry Review and is the fiction editor for ASU’s undergraduate literary magazine Lux. His works can be found in magazines/webzines such as Land Beyond the World, Scarlet Leaf Review, Blue Lake Review, Page & Spine, Pif Magazine, and others.

WHY WE CHOSE TO PUBLISH “Strength”:

We normally publish very few flash fiction pieces in our magazine, but in this issue we found four that met our stringent criteria. In “Strength” author Mason Yates gives us one with a fresh and ironic take on the idea of alien invasions, where we and the main character don’t know whether the perceived threat will prove to be a real one.

2 comments on “STRENGTH by Mason Yates”