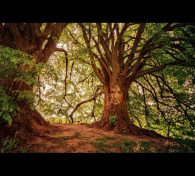 Trudging through the field behind his house, eight-year-old Harry Cole was as mad as he had ever been. It had happened again, and now he was going to get a whooping. The sun shining on his face and the chirping birds didn’t cheer him in the least.

He never had these problems when he was an only child.

He approached the tree, venting out loud and stomping his feet against the scraggly grass. “Darn Tommy!” he bellowed. “He starts the fight, and now I have to go cut a switch so I can get a licking.” He ran his right hand over the familiar tree’s rough bark. “It isn’t fair!”

Alarmed, he looked around. “Who said that?”

The echoing voice, accented by a sound like muted wind chimes, was coming from the tree. “I did,” it said.

Harry quickly circled the tree, expecting to find Helen Potts, that joker from school, pranking him. She wasn’t there. No one was.

“We’re quiet most of the time,” the voice went on, “but if we really need to talk, we can—and I need to talk… to you.”

The tree was astounded. “What did you…” it began, waving some threadbare limbs about. “Look at me.”

Harry did as he was told. Many of the tree’s branches were broken and frayed. “Yeah?” the boy asked.

“That’s because I had to get switches for Mom to spank my behind.”

“Couldn’t you use a different tree from time to time?”

“I tried that once,” Harry said, pointing at some oaks a few yards away.

“I remember that day,” the tree replied wistfully. “What happened?”

“Mom got even madder. She thought I was trying to put off my punishment. ‘Taking my sweet time,’ she said. The whipping I got was even worse than usual!”

“I see,” the tree replied, dejected.

“That’s why I keep coming to you. You’re closest to the house.”

“You have to lay off of my limbs for a while. The other trees are starting to laugh.”

“Oh sure,” the female voice told him. “We’re all connected by our roots. We know what’s going on with every other tree.” Harry couldn’t be sure, but he thought the tree leaned toward him. “Can you please leave me alone for a while,” it asked, “so I can heal?”

“Don’t make your mother angry. That way, you won’t get punished, and I can recuperate.”

“That’s so hard to do!” the boy complained.

“My little brother causes most of the trouble.”

“That toddler?” the surprised tree inquired.

“You had a picnic under me the other day.”

“Oh yeah,” Harry went on. “Anyway, he causes the trouble, and I get blamed. Then it’s switch time.”

“Your brother’s only a little boy. He doesn’t know any better.”

“When my brothers and I were saplings, they made me angry too. We’re great friends now.”

“You could do without the whippings, right?”

“Then behave,” the voice implored him. “C’mon. It’ll be good for both of us.”

Harry leaned against the tree, turning the idea over in his brain. “I… can’t,” he finally said.

“But my limbs—” the tree began, sounding on the verge of green tears.

“You’ll be okay,” Harry said matter-of-factly, reaching for a switch.

There was a loud crack as a branch above him broke off and hit the eight-year-old squarely on the head. He dropped to the dirt, unconscious.

An odd whirring noise grew from nothing. It grew very loud. A brisk wind came on, stirring the fallen leaves all around the prostrate boy. Less than a minute later, the sound and the wind stopped together, their work done.

Harry stood, rubbing the bump on his head. He spoke and was surprised to hear that his voice now had the same echo and wind-chime sound of the tree. He felt himself slipping away, oozing out of his crowded body and onto—and then into—the tree. “You had your chance,” his voice said. “It was you or me.”

The voice called to the oaks. “You’ll see that he behaves, my brothers?” The wind picked up again. The oaks’ limbs happily moved about more than the breeze stirred them. “Maybe your time will come soon? There are other family members.”

The wind briefly blew even stronger. The brothers were delighted at the idea.

Harry’s body dusted itself off, appreciating its new, young form. “I’d better get back to the house,” it said. “One spanking for what the boy did won’t be so bad.” Through a knothole in the bark, Harry’s spirit saw his body take a couple of steps away and then turn suddenly. “I almost forgot!” it said, plucking a switch from the tree—which Harry painfully felt. “This one shouldn’t hurt too much.”

It chuckled, noticing that the echo and chimes in its voice had faded completely away. “Yes,” it said, admiring the piece of its former self, “I can live with this… switch.”

His prose work has appeared in several magazines and anthologies. In 2015, his script “The Candy Man” was produced as a short film under the title DARK CHOCOLATE. In 2013, he won the inaugural Marion Thauer Brown Audio Drama Scriptwriting Competition.

WHY WE CHOSE TO PUBLISH “Switch”:

This is author Mike Murphy’s fourth appearance in Fabula Argentea. He’s a prolific writer who delivers the unexpected time after time. “Switch” is no exception, and we loved the dual meaning of the title he gives us at the end.

JUST HIS LUCK by K. Parr

THE STUBBORN BROTHER by Sebastian Hetman

LET THE DAY BE DARKNESS by Matthew F. Amati

NO VACANCY by Tiffany Michelle Brown